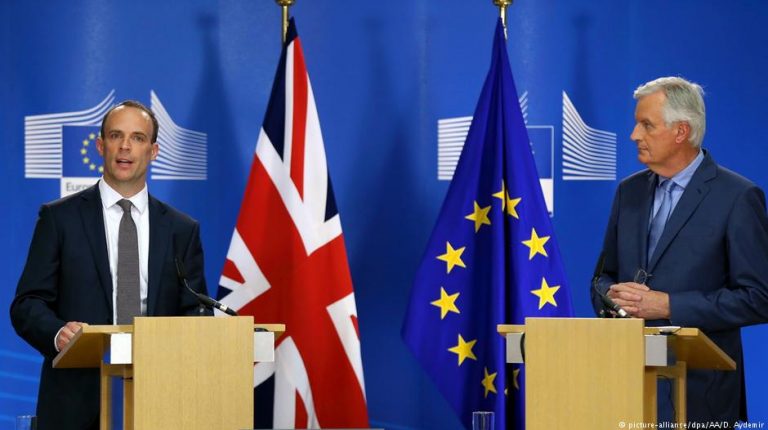 Summer break is over and Brexit continues: shock and awe about Brexit plans, no deal is no problem and the inevitable return of Nigel Farage. DW’s Barbara Wesel writes from Brussels.Michel Barnier and Dominic Raab courteously stepped out after their short meeting in Brussels on Tuesday and told the press that they had nothing to say.

“We need legally binding commitments for the backstop in Ireland,” said EU negotiator Barnier. “We will from now on negotiate continuously,” declared his British colleague Dominic Raab. And both agreed that the talks are much more advanced in matters of security and foreign policy than in the economic questions.

The two men are stuck with their script. Theresa May’s Chequers proposal is not acceptable to the EU, but neither Raab nor Barnier can propose compromises that might bridge the gap. Not even the prime minister herself can do this because her party is already getting restive. After the summer break things stand exactly where they were before the summer break. Some might call that continuity others a bad omen for the outcome of talks. But until the heads of EU governments and the British PM pull the plug, the show of the two hapless negotiators will go on.

On Thursday the government in London will be starting its campaign of shock and awe. The detailed preparations for a hard or no-deal-Brexit will be made public piece by piece. This begins with the stockpiling of drugs and vaccines, talk about marine certification, animal breeding and other economic details that no Brexit voter will ever have thought important. The plans will continue on to emergency food supplies and may culminate in the mapping out of a huge lorry park in Dover just in case frictionless border traffic to the French port of Calais should cease after March 29.

The management of Heathrow Airport has meanwhile raised 1 billion pounds on the financial market in preparation for Brexit. This buffer would allow them to last for two months should there suddenly be no income. It seems obvious what no income means for an airport. It means no flights.

At the same time Brexit Secretary Dominic Raab will give a speech in order to reassure the public. Even though the government still believed a deal with the EU was possible one had to be prepared. And please, don’t panic, nothing to see here.

The National Health Service meanwhile has warned the government, that in the case of a hard or no-deal Brexit “the entire supply chain of pharmaceuticals could be adversely affected.” NHS also fears the repercussions for its workforce. Last year some 86,000 nurses, midwives and doctors from EU countries left Britain and replacing them has proved difficult. The National Statistics Office calls it the largest fall on record.

Prime Minister Theresa May is therefore offering all EU workers the right to stay after Brexit regardless of the outcome of the negotiations. Her advisers are selling this initiative as “gaining the moral high ground” over Brussels. But May is really just trying to avert disaster for the British economy.

No deal is no problem

The heatwave in Britain has let all manner of moths, wasps and mosquitos thrive like never before. And the bad boys of Brexit, Jacob Rees-Mogg and friends, have used the summer for plotting.

A counter-paper to May’s Chequers proposal is expected soon, written by the arch Brexiteers and their think tank, the European Research Group. At the core of it will be a “positive vision” about a full break with the EU. Its main message: No deal is no problem. All these old wives tales about cliff edges, of planes stuck in airports and vegetables rotting in trucks are exaggerated. Britain would simply continue to trade with the EU on WTO terms.

One of the Brexit-brethren, former Cabinet minister Lord Lilley, explains that the EU would have to give Britain the terms as a most favored nation and therefore things would be just fine. A shame that the question remains unanswered as to why so many countries are eager to close trade deals with the EU if the World Trade Organization works so well.

The fight against Theresa May and her Chequers proposal is clearly in full swing. Things will come to a head at the Tory party conference in early October at the very latest. May’s attempt to unite her Cabinet on a compromise proposal, which includes maintaining EU regulations and creating a sort of customs union, seems doomed. Her enemies are crying treason and have warned that she will have difficulty getting Parliament on board. The mutiny among Tory Brexiteers is back on.

Nigel Farage as the Trojan horse of Brexit

Did anyone believe he had left the stage for good? No such luck. Nigel Farage has raised his head from the depth of the summer doldrums and promises yet another political return. He’s like the Terminator on steroids, jumping up over and over again, growling: “I’ll be back…”

And the man whom moderate Tory MP’s call an “unelected rabble rouser” has the gall to promise another red double-decker campaign bus, although it’s not yet certain what message Farage will put on it. The NHS-pledge about the 350 million has somehow fallen flat. How about: “Brexit – I never promised you a rose garden?” After all, Jacob Rees-Mogg admitted over the summer that it could take 50 years to see the advantages of Brexit.

Another threat by the former UKIP boss, however, is creating rather more anxiety among the Tories: They fear a hostile takeover. Former Foreign Secretary William Hague warned that “the party could be swamped by new recruits” who would distort any internal vote about Brexit or new leadership. The fear is that a stream of former Ukippers could become members of the Conservative Party. In the end, Nigel Farage would become the Trojan horse of Brexit and take over the Tories.

Put your money where your mouth is

The owner of the fashion label “Superdry” has donated 1 million pounds to the People’s Vote campaign which is finally gaining traction. This is the rather late attempt to get a second referendum and let the British voters decide about the deal or no-deal on Brexit. And the king of the cool T-shirt, Julian Dunkerton, wants to support the fight against Brexit because he calls it a “disaster.”

He didn’t have to wait for the poisonous response from the other side: Dunkerton’s campaign funds were made off the backs of underpaid Indian garment workers, Brexit-supporters claimed. It is however perfectly alright for their campaign to be paid for by a shady millionaire like Arron Banks whose dark connections to the Kremlin were just uncovered. Two sets of rules for two kinds of people.

Brexit quote of the week

“We’re in the Br-excrement. We’re up to our necks in it,” said journalist and author Gavin Esler when explaining his support for the People’s Vote campaign. The wonderfully flexible English language allows for everybody to express their fears in the most creative terms.

A recent poll has shown that the statement “I’m really bored by Brexit” has the biggest support across all age and demographic groups in Britain. Indeed.