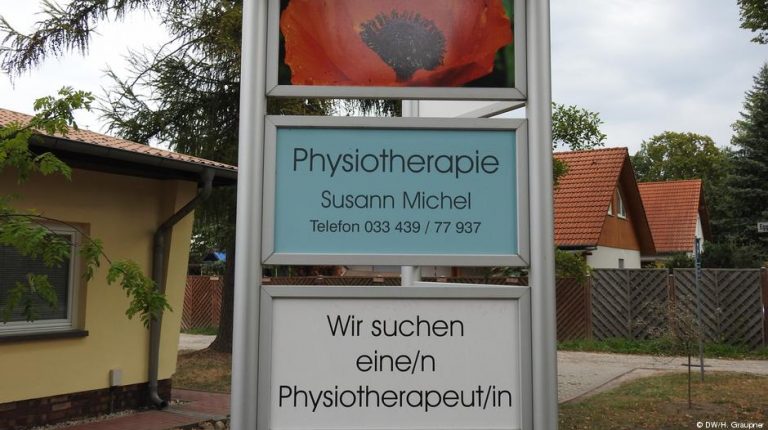 As the German economy goes from strength to strength, it’s become increasingly difficult for businesses to recruit urgently needed staff. Hardy Graupner has mingled with entrepreneurs in a small community near Berlin.”I’ve never ever experienced a period where it was so hard to hire somebody you need — and I’ve been self-employed in the business for well over 20 years,” says physiotherapist Susann Michel.”There’s simply no one left on the market to fit my needs.”

Michel is one of nearly 1,000 entrepreneurs who’ve settled down in the village of Petershagen/Eggersdorf, some 10 kilometers (6.2 miles) east of the Berlin city limits. Nestled in an area full of forests and lakes, the place has seen a dramatic rise in new arrivals from the nearby metropolis who are hoping to escape the hustle and bustle of the German capital. Back in 1993, when the twin villages joined forces, it had just 8,000 inhabitants — now it’s 15,000.

A plight shared by many

More people living there has also meant more people working there, with Petershagen/ Eggersdorf experiencing the development of several business parks, shopping centers and an increase in service providers of all kinds.

The German economy has been booming for a long period now, showing some tentative signs of overheating. The lack of skilled workers is no doubt one of these signs, and it’s felt across most sectors, also in Petershagen/Eggersdorf.

Physiotherapist Susann Michel is not the only one on the ground desperately looking for suitable staff, with the emphasis being on the word “suitable” in many cases. Take Peter-Ulrich Barth for instance. He runs a popular barber shop in the village, with prices for haircuts low enough to attract many clients.

Barth has also been suffering from a shortage of labor. “That’s been going on for some years now and I don’t really know why,” he tells me. “On paper, hairdressers are available, and the regional employment offices do establish the contact between them and us — but they simply don’t come here to ask for a job.”

A lack of motivation on part of potential applicants is also what jeweler Wolfgang Klemt sees as a major hurdle in the present-day labor market, and he argues that while the overall problem may be at its worst now, the issue has been around for a longer time.

“We started having such problems as early as 10 years ago,” he says. “As you can imagine, in a jewelry store we need people with an adequate education and people who are able to deal with clients in a competent way. And then we work shifts until 8 p.m., which is a problem for many female applicants,” he adds.

“And then there are people who just want to work 4 hours per day and get the full wage — unfortunately, we don’t have anything like this on offer,” Klemt says jokingly.

He feels that workers’ demands toward employers have risen rapidly in the current economic environment. “There are enough vacancies, and people can pick what suits them best. And even if they don’t have a job, they won’t go hungry with all the unemployment benefits around.”

Klemt’s words are echoed by hotelier Nicole Erkner-Schössow. She too has been looking for suitable staff to reinforce her team, with limited success so far. She says the willingness of people, and young people in particular, to buckle down has decreased considerably in recent years.

“Finding young people working in a disciplined way has been quite a challenge,” Erkner-Schössow says. “That’s why we’ve long focused our search for staff in the 40-plus age bracket.”

While a large number of entrepreneurs in the village could definitely employ more people, it appears that there’s no homogeneous reason as to why they can’t. Some — like tiler Holger Möricke — have specific reasons for not taking on staff.

“The economy will not always be booming like now,” he says. “And when things get worse again, how am I supposed to get rid of any extra workers without any hassle?”

Business people in Petershagen/Eggersdorf have certainly taken notice of the German government’s plan to introduce a revised immigration law that would make it easier for foreigners to get jobs in Europe’s economic powerhouse — against the backdrop of an estimated lack of 1.6 million skilled workers in the country right now.

Hotelier Nicole Erkner-Schössow agrees. “People are trained to become hotel and restaurant staff in other nations too, so there shouldn’t be an issue with their skills — and you can learn the rest as you go along, including the language.”

For jeweler Wolfgang Klemt, though, the language hurdle looks too high to clear for foreigners. “After all, we’re a specialist retailer, and employees need to advise clients on the specifics of our products and need to communicate with customers in perfect German — so, frankly, I don’t see any light at the end of the tunnel with the new legislation.”