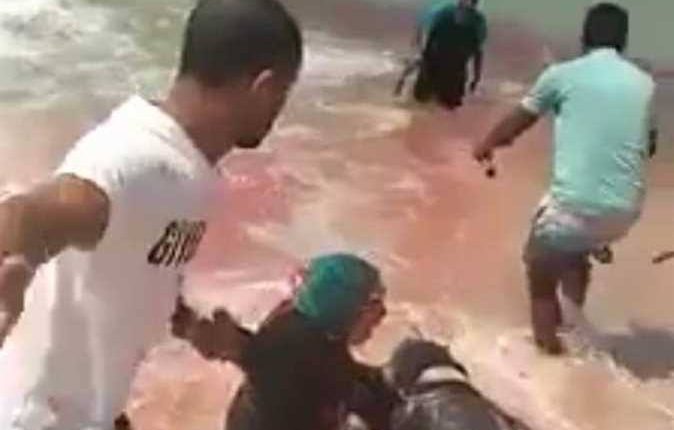 Egypt’s Prosecution on Sunday ordered the detention of a man accused of murdering a husband who was defending his ‘harassed’ wife on Alexandria beach last Friday, for four days pending investigation.

The parents were peacefully enjoying their day with their son and dog at Abu Yusuf beach in Alexandria during the fifth day of Eid Al-Adha (Feast of the sacrifice), but they were annoyingly interrupted by one of the beach visitors.

A skirmish erupted between the two men after the latter verbally harassed the wife and ended with the killing of the 40-year-old husband.

The defendant was a frequent harasser on the public beach, which lacks any type of security or guards according to one of the beach labourers. “He used to visit the beach and badger people and catcalling or harassing women,” Yasser, the beach supervisor and one of the eyewitnesses of the incident said in televised statements. “We tried to prevent him from getting into the beach but we could not.”

Yasser added, “after the two men jangled, the murderer went back to his home to bring a machete to kill the other man. Some people tried to stop him but failed.”

Police reports revealed that a fight erupted between the husband, who worked as a house painter, and the defendant, a jobless man, 39-year-old, after the latter harassed his wife. The victim died instantly after sustaining injuries on the beach.

Another eye-witness said that he was horrified when he heard a family screaming and running on the beach. “I thought someone was drowning so I ran toward the beach but I found the victim sinking in his blood after the offender hit his head with a machete or a knife,” Mohamed Said explained, adding “We held whatever we had at the beach to confront the attacker.”

However, Mohamed Rashad, the victim’s brother-in-law denounced claims of verbal or sexual harassment of his sister, saying in televised statements that he prefers not to speak to the media until the necessary legal procedures were taken. “We trust our legal system.”

Over the last few days, a video documenting the bloodbath went viral on social media with different narratives one saying that it occurred because the husband was defending his wife after she was subjected to sexual harassment, while the other  claimed that the defendant was mentally disturbed.