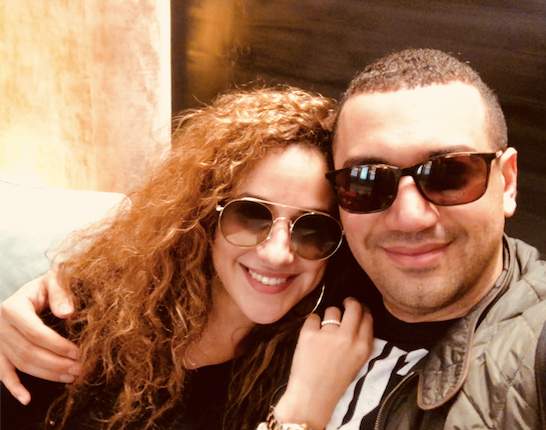 In the first week of August, Egyptian retired actress Hala Shiha declared her comeback after taking off her veil. Shortly before that in July, Islamic preacher Moez Massoud announced his marriage to an actress.

Both public figures, nearly in their forties, faced a wave of social controversy which highlighted religious and cultural interpretation complexes. They said they had expected uneasy reactions. Other people were supportive of their freedom to decide and choose.

Shiha and Massoud were topics which gained as much importance as the country’s economic policies; their actions becoming subjects of discussions by talk show hosts and newspaper writers, sheikhs and other public figures.

Coming under fire for making personal choices, Shiha and Massoud sort of fell into their own traps as both were also actively involved in promoting certain messages in the name of Islam on women dressing, the weapon that has now been used against them by critics.

A writer for the Jordan-based Al-Bawaba website wrote on 9 August that news about Shiha resuming her acting career after 12 years of retreat caused “a huge shock for the Arab audience,” pointing out that she had been wearing the Niqab and following an “extremely religious routine.” Shock was apparently the result of her previous display of commitment to religious conservatism.

On social media, criticism was harsher. Hala Shiha as a hashtag on social media has been trending for days since she made her announcement.  In her defence, many said she was free to make personal choices.

Moreover, videos on YouTube emerged, focusing on Shiha’s mother being a “seduction scenes” actress, or claiming Shiha had a serious leg injury as “punishment from God” for giving up her Niqab.

In a phone interview with the 10’ O Clock Show” with TV host Wael Al-Ibrashy, Shiha said her decision wasn’t affected by such reactions. She reiterated her love for art and said that she respected different opinions but not rumours or insults.

She also had to face attempts to link her to the outlaw Muslim Brotherhood group when Khadiga Khairat Al-Shater, daughter of detained Muslim Bortherhood leader called on her, as a friend, to reconsider herself as come back to Islam, in a post on Facebook. The actress responded by asserting they were only acquaintances not friends

Despite denying that she belonged to any sort of groups, Shiha was actively promoting the veil and Niqab, giving religious lessons and participating in such discussions on social media.

Ironically, Shiha was defending herself the other way around a few months ago. In October 2017, she issued a statement against critics of women wearing the Niqab in Egypt accusing them of racism and praising how she her religion has been respected in Canada where she lived. Earlier that year, she also responded to critics on her photo covering her face to the extent that she had to remove it.

As a preacher who called on women to cover themselves, Massoud wasn’t spared criticism when he married unveiled actress Sherry Adel, sparking negative opinions from women, especially as he tried to justify his choice of an unveiled woman using religious pretexts.

Sara Osama, whose profile picture on Facebook is with the veil, commented by stating that while veiled women are trying to support each other, taking it off is now being somehow justified.

“Fear God, fear him. You are saying what you don’t know to push away criticism. I swear in God’s name that you are only going to lose in life and afterlife. It is the fault of those who treated you as a representative of Muslim preachers,” commented another user named Rehab Kamal.

In a Facebook post published on 16 July, Massoud responded to criticism by arguing that he never promoted judging women’s religious faith by what they wear, which some saw as a lie.

A largely observed pattern of criticism addressed to Shiha on social media relied on blaming her “unreligious” act.

“Come back to your senses and don’t act childishly. Your body and hair that you are celebrating, defying God, will be decomposed in sand and you will be naked in front of him,” commented a Facebook user by the name of Mohamed Soliman on a recent picture Shiha posted of herself carrying her dog.

The actress was told she was committing a sin and going to hell because covering herself was an order from God. In most merciful comments, people sent her prayers to return to God.

“Fear God. Don’t throw away 14 years of God’s obedience. We pity you for the society you returned to is a sinful one. I dare you that these people listen to calls for prayers or pronounce the word ‘Allah’, commented Mohamed Abu Hamed.

Things took a more extreme pattern when one Islamic preacher claimed that Shiha’s husband complained to him and cried because of her behaviour.

In other instances, the religious rhetoric was used by women. To one extent, one who goes by the name of Heba Hamed Abu Shama commented that Shiha wasn’t attractive enough to have to cover herself. “I am not veiled but I still lost my admiration for you,” she added.

On the other hand, many who defended Shiha did so by relying on an anti-Islamist speech rather than refusing to judge a woman for her looks or supporting women rights in freedom of choice.

For example, well-known politician Osama Ghazaly Harb focused in an article published on 21 August on state-owned Al-Ahram website on what supporters of the Muslim Brotherhood group said about her and argued that the promotion of veil and Niqab was a tool for the group to expand its thoughts and control women.

In the same newspaper on the same day, political researcher and writer Amr Abdul Samea said Shiha was dragged into a “Muslim Brotherhood, Salafist, Daesh environment.” He argued that “only God judges people” and that “a veiled women could go to hell while an uncovered woman could go to heaven.” The idea in his article was that Shiha chose to leave the extremists’ camp.

Massoud, preaching and the religious discourse

Mainly, Massoud’s critics stemmed from the fact that his wife was unveiled in addition to being an actress, a career socially looked down upon especially for women.

Massoud who made a career out of preaching Islamic teachings, including calling for women to cover themselves was regarded as a contradicting person who chose to drop such beliefs when it came to his personal choice.

The incident was also unusual regarding the relation between sheikhs or preachers and actresses, and more an importantly an opportunity for many questions about preachers.

In an article for Al-Ahram website on 18 July, writer Ola Al-Saadani argued that Massoud usually used a less aggressive tone with regards to women’s veil in order not to lose his young audience. Yet, she pointed out to the dilemma he would continue to face vis-à-vis his social image depending on which roles and in which clothing his actress wife would take.

For years, Egypt accumulated a problem in religious discourse by opening media channels to preachers spreading Islamic teachings regardless of their knowledge or accreditation. Thus, the audiences were always subject to preachers who had been either too conservative or holding extremist views – such as Salafists who considered Copts blasphemers or others who had pretended to be more moderate to attract more fans – issuing frivolous fatwas such as smoking does not ruin one’s fast.

While President Abdel Fattah Al-Sisi has repeatedly called for the renewal of religious discourse, no particular mechanism has been set, including which ideas needed re-evaluation, except the obvious extremist ideas promoting terrorist attacks.

What has been done so far was more control of mosques and allowed preachers.

In another article on Al-Ahram published on 12 July, writer Wafaa Mahmoud saw the Massoud incident as an example of how society was unable to develop through more knowledge and awareness given the lack of proper guidance by the intellectual and cultural elites who have not been given public spaces to do so.