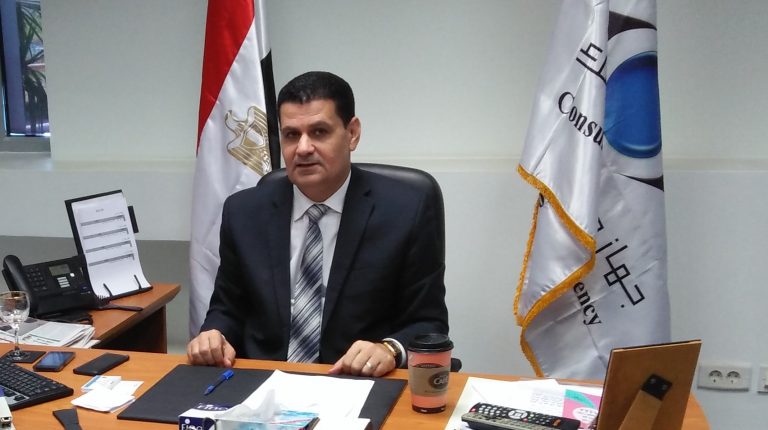 Major General Rady Abd EL Moaty, Chairman of Consumer Protection Agency (CPA), also known as the lawyer of the people, due to the many positions he held during which he assumed responsibility to protect the rights of the people. He was the deputy minister and head of the Department of Community Communication and Human Rights at the Ministry of Interior. He was also a member of the Police Academy and deputy head of the Police Research Centre, and the adviser of the parliament for Education and Scientific Research in early November 2015 after taking over the chairmanship of the Consumer Protection Authority. A few days ago, he launched a campaign known as In Love of Egypt which is considered a military camp at CPA’s headquarters in Smart Village to solve all problems and respond to 13,000 complaints.

Due to the economic situation and the suffering of citizens, the role of the CPA has increased. And the need for its activity is urgent. It is an authority that is responsible for controlling markets and protecting consumers from any manipulations or sale of any goods or services that are not legally permitted.

And because of the work of the CPA interferes with many other regulatory bodies, we conducted this interview to learn how he does it, the transcript for which is below lightly edited for clarity.

What is the idea of ​​the “Week in Love of the Homeland”?

The initiative comes in line with the approach of President Abdel-Fattah al-Sisi, who always calls for non-stereotypical solutions to solve the crises of citizens. We thought about helping Egyptians and came up with the campaign to work for one week for 24 hours. In this week, we receive all complaints to investigate them. We coordinate with all concerned bodies to complete the initiative, which seeks to eliminate the problems facing citizens.

Was this not a burden for the staff?

It is a burden, but I found an extraordinary enthusiasm from them. Most of them are youth so we could use their energy to serve citizens. You can see how happy they feel knowing that Egyptians are satisfied.

How many complaints has the CPA received?

We had about 13,000 complaints and we are close to completing almost half of them until today and intend to end all complaints before the end of the week.

Many Egyptians do not know about the CPA and its role?

This has already been the case, but we have begun to take quick steps towards educating citizens by printing awareness leaflets, consumer guides and placing posters in all markets in distinct and visible places for consumers.

We also convey the message and culture of protecting consumers across all multimedia means and through phone companies in cooperation with mobile operators.

This is in addition to direct awareness through the holding of seminars at universities. We signed a protocol with the Ministry of Endowments to spread the culture of consumer protection in the Friday sermons, as well as the Christian clergy to sensitise the audience of the Church. We have prepared a guide to consumer protection for the first time, which includes information on the history and role of the CPA. It also includes all information and tips with regard to commodities and services.

Is awareness only for the consumer?

The awareness plan was not targeted nor focused for the consumer only, but it also includes the rest of the trading system from traders, manufacturers and anyone connected to the CPA. Our message to merchants was to fear Allah and to know that we are going through difficult economic conditions. They have to understand this and to see why consumers are the weak chain. They have to sell at fair prices with a small profit margin and to provide commodities with standard specifications away from manipulations. To traders I say: your wealth is from people, so you have to stand by them.

There have been a lot of complaints about ad deception. What is the CPA’s role in this?

The CPA has a media monitor to verify all fake ads which damage people’s health. We address the Ministry of Health and other concerned bodies to investigate such cases. A few days ago, we stopped broadcasting an ad about a product that claimed to treat joint problems.

Certainly, the new consumer law has been amended and deterrent penalties against e-commerce fraud are in place to regulate the system to protect consumers from risks of buying online.

Does the law have sufficiently tainted sanctions?

The philosophy of the new law in itself is to achieve deterrence and all the provisions of the law (72 articles) are in the interest of consumers positively. A committee is currently being formed to study legal articles and to develop specific mechanisms for their implementation. This would remove all malpractices in the market and control them. The problem is not in the law but rather the implementation.

During the summer, many places adopted touristic prices or minimum charges. How should consumers react?

The number of establishments authorized for the minimum charge is below 250 for shops. Campaigns have been intensified against such practices. A manual and a list of shops licensed from the Ministry of Tourism to have a minimum charge will be put on the CPA’s website to protect consumers.

We will take deterrent measures against cafeterias that are not licensed by the Ministry of Tourism to a minimum charge system. Consumers should also cooperate and call the CPA on 19588 or send a WhatsApp message to any violations.

Does the CPA protect from contractors, constructions, and maintenance?

We follow the contracting work and the new law deals with consumer protection in these activities. The maintenance and such works have to offer a guarantee for this work for at least one year.

The consumer has the right to return or replace goods within fourteen days from the date of purchase without giving reasons. Defective goods can be returned or replaced within a month. Penalties against defective goods have been toughened with a penalty up to EGP 1m. There have been negative phenomena in the markets after the spread of some products and counterfeit goods sold on the streets that receive demand from consumers due to their low prices. These are bad for the citizens’ health and can cause many problems.

You have the right of judicial control, do you have trained staff to use it?

The CPA is now being equipped with trained staff and is improving its human resources. We will cooperate with the General Federation of NGOs which includes 52,000 NGOs to activate their role in controlling the market, given that they are present in different hamlets and villages. We signed a protocol with Talaat Abdul Kawy from the federation. We have allocated a department to receive complaints on WhatsApp on 0128166180.

What about associations that work in the area of ​​consumer protection, in particular?

We have 97 civil associations working in the field of consumer protection in Egypt and we aim to activate their role. We will deal with their official entity in Egypt, the federation, given it includes 5m members and 52,000 NGOs.

Is the decision to put prices on goods set to be applied?

We are keen to implement Resolution 330 of 2017 issued by the Minister of Supply on placing prices on goods to respect the community.

During our tour in the markets we found that traders are committed to placing price lists. We want to activate the culture of rationalisation, which can indirectly fight against traders’ greed. We are assisted by Al Azhar and the Church in this.

We want social supervision to be in parallel with the administrative control and also in coordination with civil society organizations.

How do you deal with complaints from the centres of training or maintenance?

Any complaints are investigated. We have also set up a department for humanitarian cases, especially for elderly and people with special needs to help the call centre also on 19588.

The number of complaints has amounted to 300 daily. We have received over 14,000 complaints this year, up from 10,000 last year. Though this is a burden, we believe it’s a good indication of the CPA’s role.

Are there any sufficient branches in the governorates to follow on these complaints?

Unfortunately, the number of branches in the governorates are not enough as we have only six branches. We called to increase them and sent letters to governors to open more branches to reach residents of all governorates and ease serving them. Our goal is to achieve citizen satisfaction and remove any obstacles.

Of course, it has an important role, and our role is coordination through state apparatus. We have arranged campaigns to control fares at bus stops, gas stations and markets.

We went to the governorates of Port Said, Sharqia, Dakahlia, the wholesale market in the sixth of October and El-Obour.

Are there outlets to receive complaints and access to you other than the direct route?

There is more than one window to receive complaints including Information and Decision Support Centre (IDSC), the Ministry of Supply, and all government portals online.

As for the supervisory role, we have inspectors who have judicial control and we receive all complaints from all over Egypt. There is a tight control imposed by the law which regulates the relations between consumers and citizens. I have to affirm that we do not oppose traders, but only the greedy among them.

Do you have any advice to consumers and traders?

I advise consumers to claim their rights under the law and to keep their purchase bills in order to help us in the performance of our role by reporting any violation. I guarantee that we stand by them and protect them against any exploitation, monopoly, and malpractice.

To traders I say that contentment is an inexhaustible treasure. You all have to be honest and commit to the law and maintain the rights of consumers. You have the right to make a profit, but within normal limits.

According to NTRA, calls come randomly as some people may be induced to redial for curiosity, explaining that calls are answered to weird noises, tempting callers to try and listen for one or two minutes, while composing their balance.