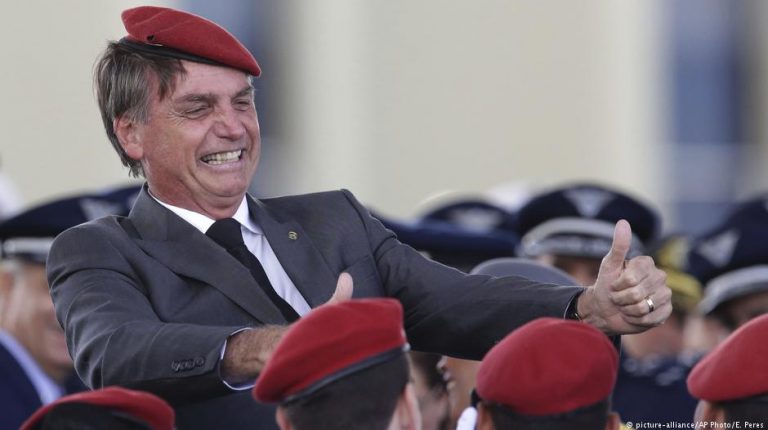 German companies were indifferent during Brazil’s military dictatorship. A shareholders association has urged the captains of industry not to let history repeat itself with presidential candidate Jair Bolsonaro.The Association of Ethical Shareholders Germany is expressing its concern about companies’ silence on the far-right presidential candidate Jair Bolsonaro in Brazil.

The association — whose members use shares in companies registered on the German stock index to prod businesses toward responsible stances on human rights and environmental protection — has labeled the politician a “fascist.”

Bolsonaro, who currently has a plurality of support in Brazil’s presidential polls, regularly praises torturers and others who served the 1964-85 military dictatorship.

The organization is now demanding that German companies take a stronger stance against Brazil’s National Confederation of Industry (CNI), after the body’s president said corporate leaders would have little to fear under Bolsonaro.

DW asked representatives of the nine largest German companies active in Brazil for their opinions on a possible Bolsonaro government. All of the companies declined to take a political position on the far-right candidate.

The critical factor for the carmaker Mercedes-Benz is that the next government focus on rebuilding and strengthening Brazil’s economy. A Siemens representative said the company trusted Brazil’s institutions, and emphasized the importance of the rule of law, political stability, economic freedom, and clear and consistent rules.

A representative for Volkswagen said the automotive giant supported democracy and civil liberties, but would stick to its investment plans in Brazil regardless of the election outcome.

Christian Russau, a board member of the Association of Ethical Shareholders Germany, told DW that companies’ silence gives the impression that “all they can think of is profit.”

DW: Why did your association issue a statement after Jair Bolsonaro appeared before the CNI?

Christian Russau: We are concerned about the hateful direction of public discourse in Brazil. I was shocked when I saw in a video posted by the CNI of Bolsonaro lapping up the applause of the audience [for his rhetoric] against admission quotas for the disadvantaged and Afro-Brazilians, political correctness and his definitions of gender identity.

Two weeks later, the president of the CNI, Robson Braga de Andrade, declared that Brazilian businesses had few concerns about the potential of a Bolsonaro government. How do you feel about that?

It is unbelievable: It seems that entrepreneurs are only concerned about business and profits and no interest in democratic values and respect for minorities. One should not treat democracy and dictatorship lightly; one cannot pretend that one has seen nothing and allow such events to happen. Otherwise, we will find ourselves suddenly in a pre-fascist era.

All this reminds me of VW’s dealings in Brazil in the 1970s, when companies did not care about the military dictatorship. The former CEO of VW, Carl Hahn, even said he saw no problem in the replacement of Brazilian democracy with a dictatorship. Hahn said: “I wasn’t worried about that then. I don’t remember us crying with tears over the loss and flushing away of democracy.”

Why are you calling for a statement by German companies against the CNI’s welcoming of Bolsonaro?

German companies are essential for the Brazilian economy, especially in the industrial sector. The CNI unites the industry associations of all Brazilian states, and German companies influence these organizations. We demand that they speak out against the threat of a new authoritarianism: a pre-fascism.

But the primary goal of companies is profit. Why should they be obliged to comment on elections?

During the military dictatorship, economic success was based on inflation and stagnation of salaries, which fell on the workers. The large German companies also made profits from this. I don’t think any shareholder nowadays wants to knowingly make profits by exploiting others. In addition, companies now have moral and ethical obligations.

DW has asked the nine largest German public companies operating in Brazil whether they agree with the statements of the president of the CNI and whether they could comment on Bolsonaro’s candidacy. No one said anything about that. How do you assess this reaction?

I don’t know if I would call that timidity, cowardice or opportunism. Maybe all three will play their part.

Some of the companies reaffirmed their respect for values. For example, VW claimed to defend democracy and freedom of expression, and Siemens referred to legal certainty, political stability and economic independence.

I understand their fear of speaking out in public. The same thing happened in Germany when only the CEO of Siemens, Joe Kaeser, criticized Alternative for Germany [AfD]. As a rule, hardly anyone buys products form Siemens [which makes water turbines and signaling systems.] In the case of VW, it is the opposite: People buy cars and identify with the brand.

No other board member of a German company wanted to speak out against AfD. The board members of a car manufacturer declared anonymously that if they positioned themselves politically, the company would sell up to 19 percent fewer cars.

Even though I disagree, I can understand why they shy away from explicitly criticizing extreme right-wing candidates such as Bolsonaro. But they are repeating the same mistake they made back in the 1970s, during the military dictatorship.

At 1830 UTC, DW’s editors send out a selection of news and features. Sign up to receive it here.