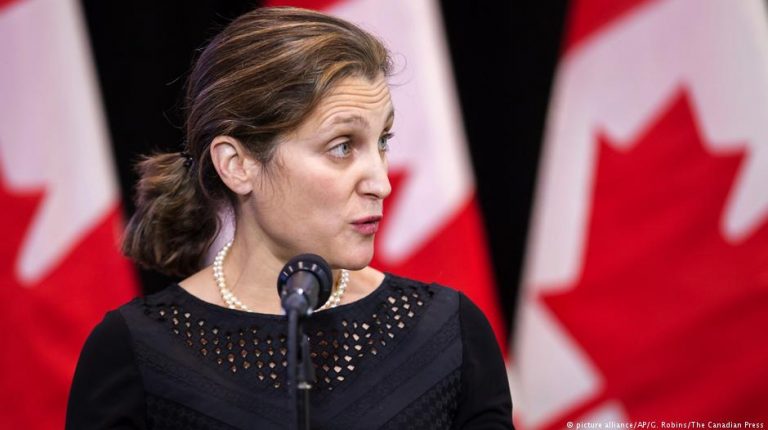 As the US and Mexico unveil a reworked trade agreement, the old one’s third leg, Canada, said its signature is needed and it may not sign it. But what have the US and Mexico agreed and how much leverage does Ottawa have?US President Donald Trump’s economic adviser, Larry Kudlow, said Monday’s revised NAFTA deal with Mexico should serve as a “reset” for talks with Canada. But if talks with Ottawa are not concluded by the end of this week, he said, Trump will notify Congress that he has reached a deal with Mexico and sign it within 90 days.

Washington hopes Canada will fall into line as Trump’s new global trade regime takes effect. “Let’s make a great deal like we just made with Mexico,” Kudlow said. “If not, the USA may have to take action.”

A Canadian government official told Bloomberg on Monday that a deal is possible this week, but only if both sides make concessions.

The markets read such noise positively. Canadian stocks and the dollar were up late on Monday, with shares of Canadian auto parts makers like Magna International and Linamar among those to rise sharply.

But negotiations among the three parties to the 1994 North American Free Trade Agreement whose mutual trade totals about $1 trillion (€910 billion) annually, have dragged on for over a year and Ottawa is unlikely to be rushed into a deal it doesn’t want. “We will only sign a new NAFTA that is good for Canada and good for the middle class,” Freeland said.

And added to this, US trade negotiations with Mexico aren’t yet finalized, Lighthizer admitted after the fanfare had died down on Monday.

He said he should file final documents on August 31. Then Congress would have 90 days to read and approve its details, a process that, thanks to Trade Promotion Authority rules, could continue past the midterm elections in November.

Trump’s Republicans, who are far from sure to win the elections, also want Canada in. Orrin Hatch, the Utah senator who chairs the Finance Committee that would need to approve any deal, said “a final agreement should include Canada.”

Welles Orr, an assistant US Trade Representative under George H. W. Bush who is now a senior trade adviser at law firm Miller & Chevalier, told Bloomberg that a lot of this is about optics versus procedure. “This administration could probably pull off something on the optics, but I don’t think they’re going to get into congressional buy-in on the procedure of freezing out Canada,” he said.

Read more: Donald Trump’s trade spats with Europe, China and NAFTA ― What you need to know

Furthermore, even if Canada agrees to the NAFTA revamp, a new trade pact still needs the approval of all three countries’ legislatures.

Mexican negotiators are keen to seal a new deal before president-elect Andres Manuel Lopez Obrador takes over on December 1.

What’s on the table?

The US wants to increase the percentage of every car that must be sourced from a NAFTA nation to move freely across the borders of the three NAFTA nations. This would rise to 75 percent from 62.5 percent. Lighthizer and Mexican Economy Minister Ildefonso Guarjardo said.

Added to this, the threshold for the amount of manufacturing that must be performed by auto workers earning at least $16 (€13) per hour would be hiked from 40 percent to 45 percent. This measure could move some production back to the US from Mexico and should lift Mexican wages, a White House official said. Mexico’s hourly average factory wages are less than $3 per hour compared to Canada’s C$25 ($19.28).

“The big change that was agreed was new rules of origin that determine when cars count as North American and thus qualify for NAFTA’s zero tariffs. The US-Mex agreement makes it harder for cars to qualify, and in this way takes some of the free trade out of NAFTA. Canada is fine with this change,” Simon Lester, Associate Director of the Center for Trade Policy Studies at the Cato Institute, told DW.

“Other items agreed are stronger IP rules and a ban on local data storage requirements. These may be a little uncomfortable for Canada,” he added.

But perhaps the biggest issue has been the US demand for a sunset clause, which would mean reevaluating the deal every five or six years with the option to get out. Both Mexico and Canada oppose this arguing it would create uncertainty.

If they are to agree to it, the US might first have to drop its higher tariffs on steel and aluminum imposed on Canada and Mexico earlier this year, one trade expert said.

Another issue is anti-dumping panels allowed under the current NAFTA, known as Chapter 19 panels. Canada wants to keep them and Lighthizer wants to bin them.

“There was agreement to eliminate the Chapter 19 dispute process,” Lester said. “Canada likes these panels and has called eliminating them a ‘red line.’ It will be interesting to see how Canada reacts to this one.”

He added that there is also agreement on stronger labor/environment chapters, which “Canada will be fine with.”

“Overall, there are a mix of large and small changes to NAFTA here, and while the fundamental basis remains, it is a significant remake of the agreement. Canada will have a lot of difficult decisions to make in deciding whether it wants to go along with these changes, or whether it should try to push back,” Lester said.

“If Canada were to join, it could morph into a revision of NAFTA,” Jasper Lawler, Head of Research and Education at London Capital Group, told DW.

“Canada now has to hurriedly work out a deal, hat in hand,” Lawler said. “And the best it can probably hope for is to retain its ability to dispute anti-dumping and countervailing duties measures by the US under chapter 19. Canada will probably have to sign on to the rest, or risk much worse arrangements with the US outside of a trade agreement,” he went on.

At 1830 UTC, DW’s editors send out a selection of news and features. Sign up to receive it here.