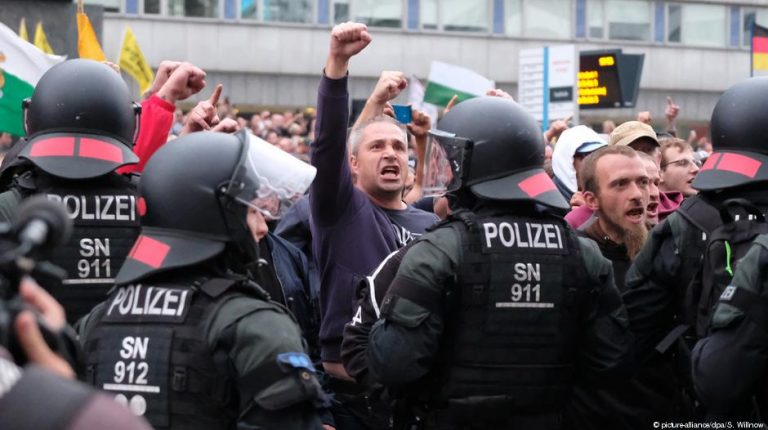 On Sunday and Monday evening, right-wing extremists marched through the eastern German city of Chemnitz. The ringleaders of the movement have well-established links to the local football hooligan scene, as DW explains.”Our city — our rules,” began the Sunday morning Facebook post from Kaotic Chemnitz, a football hooligan group categorized as “extreme right-wing” by Saxony state authorities, and banned by fourth-division side Chemnitzer FC since 2012.

“Let us show together who has the say in the city!” it continued, calling on “all Chemnitz fans and sympathizers” to meet at the colossal bust of Karl Marx in the center of the city formerly know as Karl-Marx-Stadt. “Honor, loyalty and passion for club and home city,” it concluded, before being deleted.

The call followed the fatal stabbing of a German-Cuban named only as Daniel H., 35, who died in hospital on Sunday following an altercation late on Saturday night. A 22-year-old Iraqi and a 23-year-old Syrian remain in police custody following the incident.

While about 100 people attended a vigil organized by the far-right Alternative for Germany (AfD) party at the scene of the murder, it believed that between 800 and 1,000 people responded to the call from Kaotic Chemnitz. They proceeded to march through the city center, chasing and attacking people of foreign or migrant appearance and chanting slogans such as “Wir sind das Volk!” (We are the people) und “Das ist unsere Stadt!” (This is our city).

On Monday night, a second demonstration organised by the far-right Pro Chemnitz group attracted upwards of 2,000 right-wing extremists, some of whom openly gave Nazi salutes and chanted “Germany for the Germans — foreigners out” as the police maintained a policy of containment rather than direct intervention.

What has football got to do with it and who are ‘Kaotic Chemnitz’?

As in several cities in the former East Germany, the extreme-right scene in Chemnitz has close links to local football hooligans and mixed martial arts fighters.

Kaotic Chemnitz originally came into being as an attempt by the hooligan group HooNaRa (an abbreviation of “Hooligans, Nazis, Racists” and a leading hooligan alliance in the 1990s and 2000s) to infiltrate the Chemnitzer FC fan scene.

Some members of Kaotic Chemnitz are former members of the NS-Boys — a Chemnitz hooligan group that split from the Ultras Chemnitz 99 in 2004 but was officially banned by Chemnitzer FC in 2006. Though the initials “NS” ostensibly stood for “New Society,” their combination with imagery from 1930s Nazi propaganda make the reference to “National Socialist” abundantly clear.

According to Robert Claus, an author and expert on right-wing extremism among German football fans who spoke to German news portal watson.de, today’s hooligans and right-wing ultras in Chemnitz maintain close links to counterparts in other eastern German cities such as Cottbus — where right-wing hooligans connected to FC Energie Cottbus have made headlines in recent years.

Earlier this month, hooligans linked to FC Energie Cottbus were in the away end when Chemnitzer FC visited SV Babelsberg 03, a club known for its left-leaning hardcore support.

“The scene has demonstrated on several occasions that it is capable of mobilizing its right-wing hooligan scene in a short space of time,” said Claus.

As spaces which bring together large numbers of people simultaneously, football stadiums have long served as fertile recruiting grounds for right-wing extremists and neo-Nazis, especially in economically deprived areas.

Football hooligans have played key roles in several high-profile outbreaks of right-wing violence in recent years. In 2014, over 4,000 hooligans took part in a demonstration in Cologne organized by HoGeSa (Hooligans Gegen Salafisten, or Hooligans Against Salafists), a group of hooligans affiliated with football clubs across Germany.

“The more violent elements of football fan scenes have experience in confrontation and know how to organize themselves,” explained expert Claus, adding that “social-Darwinist” principles such as “natural law” are prevalent. “This tends to lead to a right-wing ideology and has always fitted well with national-socialist thinking,” he continued. “Hooligans in Saxony are particularly political.”

In 2015, right-wing extremists connected to banned football hooligan groups in Leipzig were behind the LEGIDA protests — the more extreme sister movement of the PEGIDA demonstrations in Dresden. In 2016, 250 neo-Nazis claiming connections to Lokomotive Leipzig, Hallescher FC and Dynamo Dresden, as well as Chemnitz, rampaged through the alternative Leipzig district of Connewitz.

What can the football clubs do?

Chemnitzer FC, who were relegated from the third division to the regional fourth tier last season and who filed for bankruptcy after racking up over €2.5m ($2.93m) of debt, banned Kaotic Chemnitz in September 2012.

The group’s members are not permitted to attend home games or even participate in fan tournaments, but their Facebook page continues to post regular match reports and upload photos, and their flag is often displayed openly at away fixtures. “Standing firm together and raising a fist for our city, you will never destroy us,” reads a poem on the group’s Facebook profile.

“Both football and Chemnitzer FC can do a lot more, especially in terms of prevention,” Claus told Spiegel. “Banning orders aren’t the only measures which can be taken. The police need to keep a more critical eye on such groups.”

“Particularly in Saxony, we’ve seen that many hooligans have become more professional by way of the MMA scene,” Claus told watson.de, whose journalists reported extensively from Chemnitz on Monday evening, adding that neo-Nazis are regulars on the undercards at combat sports and boxing gyms in the region.

“More comprehensive regulations for combat sport gyms and event organizers is required to determine how to deal with right-wing violence,” Claus suggests. “What are their policies and what values to they want to convey to their members in order to prevent right violence from spilling out onto the streets?”