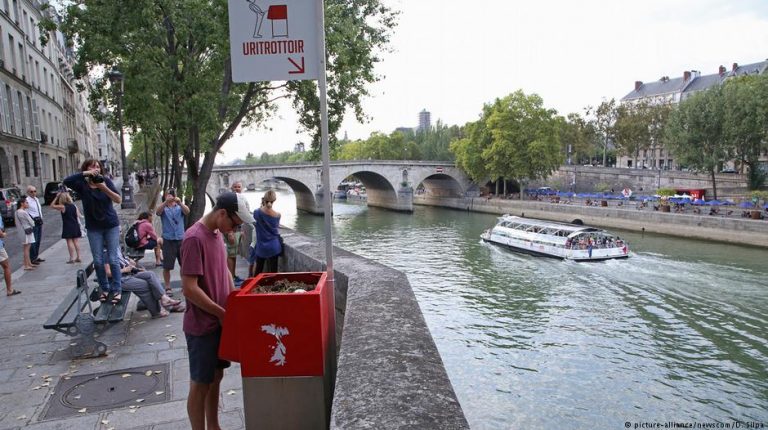 What was supposed to stop peeing in public has become a joke: A urinal located on the Seine promenade is far from being a quiet retreat.The French capital wanted to counter peeing in public with ecological urinals — and inadvertently created the summer’s biggest joke.

Those who relieve themselves in one of the bright-red boxes located near the Notre-Dame cathedral right by the Seine River get to be observed by walkers on the promenade, passing tourist boats on the Seine and people in deckchairs on the opposite shore. Peeing on show: this sight promptly triggered a wave of ridicule and criticism.

The inventors of the open-air urinal, from a start-up in Nantes, are saddened by the “hair-raising proportions” the topic has taken on. They blame decisions taken by the Paris city council: “The problem lies in positioning,” says designer Laurent Lebot. The urinal was not intended to stand exposed on the banks of the Seine, but rather to disappear discreetly into corners. Lebot still campaigns for the concept as a means of preventing men from urinating in public and making the city cleaner.

A lack of public toilets in Europe

Paris is by no means the only city that wants to fight the problem of people peeing in public. Open-air urinals can also be found elsewhere — in Brussels there is even one on the outer wall of a church. In Copenhagen, public urinals are always set up when celebrations take place in the Danish capital.

Until recently there were hardly any public toilets in Madrid. The city government only began installing modern public facilities last year. Its use costs 10 cents. The roughly 130 toilets even offer wireless internet access. But you shouldn’t make yourself comfortable there for too long. After 15 minutes the door opens automatically.

In the United Kingdom, on the other hand, the number of public toilets has been declining for years due to cost reasons.

The situation is very different in the southeast Asian city state of Singapore. Here, public toilets are always within reach: in shopping malls, subway stations or even at the many markets with street kitchens. Those who still pee in public are fined the equivalent of 96 euros.

The discussion on the bright red Paris urinals on the banks of the Seine, however, continues. Paris district mayor Ariel Weil has made it clear that the question of the urinals’ location should be decided again but this time together with the local residents. After all, some of the site’s critics have also acknowledged that there is a need for such a facility — after all, the banks of the Seine Island are always a popular meeting place.