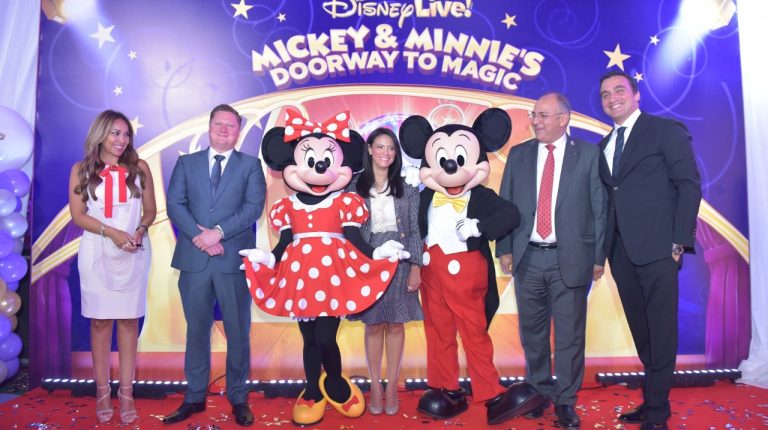 Feld Entertainment, the worldwide leader of live touring family entertainment in collaboration with the leading Egyptian activation agency, Dino Activations announced on Tuesday Disney Live! Mickey and Minnie’s Doorway to Magic, to the region, under the patronage of Ministries of Tourism and Investment.

The show features more than 25 Disney characters, giving the audience an exceptional night of entertainment with efavourite songs, mesmerising illusions and Disney stars, including the ‘True Original’ Mickey Mouse who is celebrating his 90th anniversary this year.

Feld Entertainment creates Disney Live! show that compiles many of the audience’s favourite Disney films, such as Tangled, Aladdin, Toy Story, and more.

With Dino Activation’s help Disney Live! returns to Egypt for the first time since 2014 to perform again before families and put a smile on children’s faces. The performance will go live daily starting 26 September huntil 6 October h2018.

Steven Armstrong, regional vice president of Feld Entertainment, EMEA region, said “we are delighted to be returning to Cairo with Disney Live! Our productions are always warmly welcomed by the people of Egypt. It’s always a pleasure to visit a city like Cairo, so rich in culture, and be able to bring families together through the magic of Disney.”

For his part, Mohamed Amer chairperson of Dino Activations said that the show is considered the biggest in the entertainment industry in Egypt with expected attendance of up to 60,000 spectators.

Amer noted, “we are thrilled to participate in the entertainment industry here in Egypt, and promoting the country as a hub for tourism in the Middle East.

Amer noted that his company looks forward to continue working with Feld Entertainment to bring joy to Egyptian families and Disney fans for years to come.

Elevating the production to new heights are illusions designed by Jim Steinmeyer. He is a pioneer and master of magic, his knowledge and talent for creating amazing visuals set the scene for some of the most iconic Disney moments. Including Rapunzel and Flynn Ryder levitating in a starry sky amidst the floating lanterns and a laser routine performed by Disney Pixar’s Toy Story’s Buzz Lightyear.