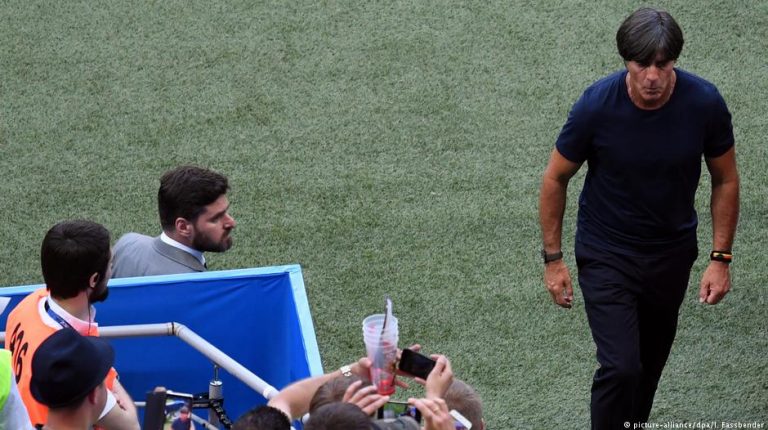 Two months after Germany’s World Cup humiliation, Joachim Löw and Oliver Bierhoff faced the media for the first time to present their comprehensive analysis of what went wrong. DW’s Matt Ford wasn’t totally convinced.It will come as little surprise to anyone present at the press conference in Munich, watching on television or reading about it later that the explanations provided by Löw (top) and Bierhoff were just as flimsy, half-hearted and lacking in conviction as Germany’s performance’s in Russia – both on and off the pitch.

But let’s start with a positive: Löw’s sporting analysis, at least, was meticulous, honest, self-critical and forward-looking.

“My biggest error was thinking that we could make it out of the group stage with possession football,” he admitted. “I wanted to perfect it and it bordered on arrogance.”

Löw commented upon how possession football has brought Barcelona, Bayern Munich and Manchester City success over the course of a league season but that, in the Champions League, it was two faster, counter-attacking sides who reached the final in Real Madrid and Liverpool.

Valid points, as was the acknowledgement that Germany’s World Cup opponents defended much deeper and relied more heavily on set pieces.

Unfortunately, for a coach who described himself in an interview with Kicker magazine before the World Cup as a “football visionary” whose job it is to travel the world identifying current and future trends in the global game, the conclusions arrived far too late.

Of course, the World Cup fallout hasn’t just focused on the disaster on the pitch. From the accusations of racism surrounding the Mesut Özil affair to the over-commercialized circus which is “Die Mannschaft,” incidents off the field have been just as explosive. And here, Löw and Bierhoff missed the mark.

“Özil was exaggerating a bit when it comes to racism,” said Löw. “There was never a single incident of racism within our team.”

Notwithstanding the fact that Özil has never actually accused his own teammates of racism, it simply isn’t down to Löw, a 58-year-old white German man from the Black Forest, to decide whether, or to what extent, Özil felt that DFB’s handling of the situation was discriminatory.

Still, the revelation that Özil still hasn’t spoken to Löw since the World Cup, let alone admit that posing for a photograph with a foreign dictator may have been a mistake for a professional footballer, was a reminder that neither party has come out of this well at all.

And finally to Herr Bierhoff, whose transformation from striker to marketing executive is complete. “I have been accused of a lot of things when it comes to commercialization,” said the 50-year-old, but that was as about as close to reality as he got.

According to Bierhoff, the fact that the German players rode their bikes to an open training session during their pre-season camp in Eppan was an example of how accessible they are for fans.

Never mind the carefully-staged press conferences at which journalists are not permitted to ask questions. Never mind the expensive tickets. Never mind the orchestrated atmospheres and official choreographies by the “Fan Club Nationalmannschaft sponsored by Coca-Cola.”

It’s all ok because the players rode their bikes to training.

On the basis of this afternoon’s press conference, the privileged gentlemen at the top of German football are just as far removed from reality as ever.