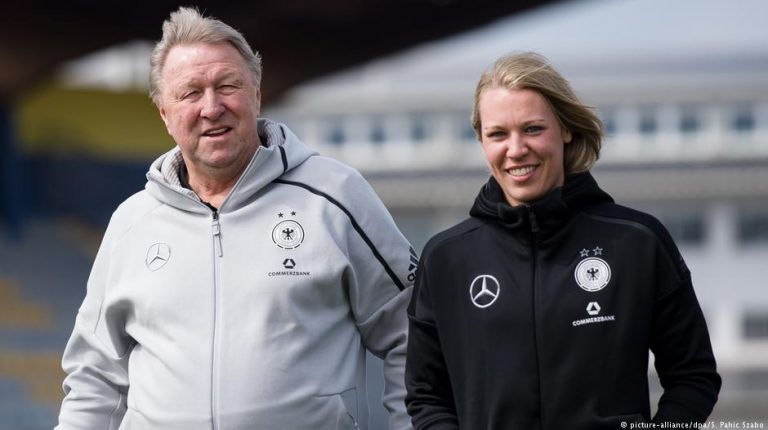 Germany visit group leaders Iceland on Saturday knowing anything less than victory will complicate their hopes of reaching the women’s World Cup in 2019. Their final group game is against the Faroe Islands on Tuesday.The time when Germany dominated women’s football in Europe is long gone. After the sacking of coach Steffi Jones in March due to a series of poor results across various competitions, the Germans are still fighting to claw back ground in World Cup qualifying Group 5.

Iceland top the group on 16 points with two-time world champions Germany, who visit Iceland on Saturday, a point adrift. With just Tuesday’s game in the Faroe Islands to follow, interim Germany coach Horst Hrubesch (pictured above, left) knows they need to beat Iceland to move top of the group and regain control of their own destiny in qualifying for France 2019.

Only the group winners go straight through with the four best runners-up from European qualifying facing playoffs. Germany trail Iceland courtesy of a shock 3-2 home defeat by the smaller nation in October last year but Hrubesch is in confident mood.

“It’s about winning this game, and we’ll do that,” he told reporters on Thursday. “It makes no sense to be fearful.”

Victory over Iceland should all but guarantee progression to the June and July showpiece in France given the weakness of Tuesday’s opponents, the Faroes, who were hammered 11-0 by Germany in October in a rare bright spot during Jones’ reign.

But Germany go into the Iceland game without two key players. Captain Dzsenifer Marozsan is out after a pulmonary embolism and defender Babett Peter is injured.

They will also face a partisan crowd in Reykjavik with 15,000 expected to fill the stands, the first time the Icelanders have sold out a stadium for a women’s international.

Hrubesch though is as experienced as they come, having led the German men to an Olympic silver medal in 2016. He is looking for one more achievement in the game before retiring and handing over to current Switzerland coach Martina Voss-Tecklenburg in September.

“His calmness is infectious,” defender Kristin Demann (above, right) said. “We are well prepared for everything.”