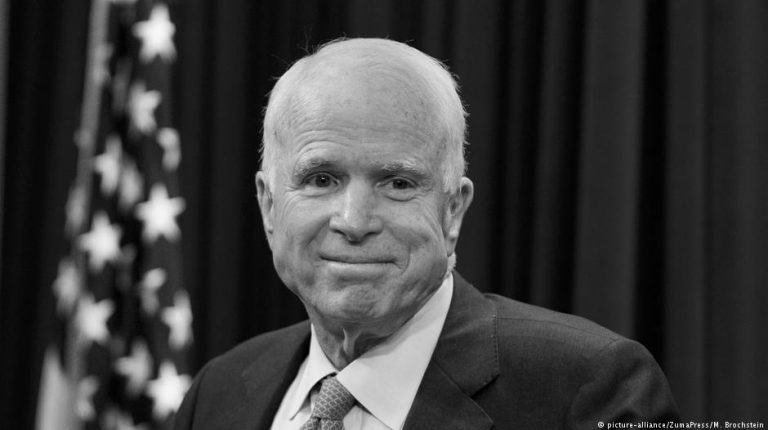 Thousands of Americans and many foreign dignitaries paid their respects to the late John McCain in a week of remembrance that was capped with a service at Washington’s National Cathedral. Why was he so revered?John McCain’s political record is that of a conservative Republican legislator with a lifetime rating of 60 percent by the conservative Heritage Foundation.

On domestic policy issues he voted for the massive tax cuts pushed for by President Donald Trump and the Republican Party. He supported limiting abortion rights and voted to defund Planned Parenthood, a group that provides abortions and other health services to women. And as a firm backer of the constitutional right to bear arms McCain was also a leading recipient of NRA dollars in Congress.

On foreign policy John McCain was a hawk who believed the US is destined to play a leadership role in the world. He was a staunch supporter of the Iraq War and other US military interventions. As head of the Senate’s Armed Services Committee he fought continuously to increase the military’s budget.

McCain was arguably also the fiercest opponent in Washington of Russian President Vladimir Putin. And he vehemently opposed the Iran nuclear deal hammered out after years of international negotiations.

With such a conservative political record, by traditional standards, why did the reverence for John McCain extend not only beyond party lines in Washington, but also across the Atlantic and the world?

Former President Barack Obama who defeated McCain in the 2008 presidential election may have expressed it best in his eulogy at Washington’s National Cathedral on Saturday.

“He did understand that some principles transcend politics. That some values transcend party,” he said about the long-time Arizona senator. He added that McCain “was a pretty conservative guy” with whom he disagreed on a whole range of issues. But noted Obama, “he never doubted that we were on the same team.”

Put differently: McCain was a conservative politician with a clear moral compass, not an ideologue.

Or as one of the many people standing outside the National Cathedral said. “He was a decent man.”

That characteristic led him not always, but repeatedly, and in crucial moments to buck his party’s line and stand up for what he viewed was in the best interest of the country and its people. He did so most famously, and consequently, in one of his last and most crucial Senate appearances when he voted against President Trump and the GOP’s plan to dismantle “Obamacare,” President Obama’s signature health care program.

He was also one of the most vocal critics of torture during the presidency of George W. Bush. Amid discussions in Washington on whether the so-called waterboarding of prisoners captured after the September 11 attacks amounted to torture, McCain, who was tortured during his time as a prisoner of war in Vietnam, said: “It is not a complicated procedure. It is torture.”

His moral convictions, his earnest willingness to listen to others and try to reach a compromise, and his deep interest in global affairs also made him certainly the most-well known and probably also the most influential US legislator of the past decades.

That holds particularly true for the transatlantic relationship of which McCain was the most tireless defender in Washington because he strongly believed it to be crucial for the leadership role he was convinced America and the West should play in the world.

That special relationship between Europe and the US is repeatedly being questioned if not openly attacked by President Trump, which was one of the reasons for Norbert Röttgen, the head of the foreign relations committee in Germany’s parliament, the Bundestag, to travel to Washington to attend the funeral service honoring John McCain.

“McCain’s death marks a break that has taken place”, Röttgen told reporters in Washington prior to the service. “The transatlantic relationship as a Western alliance and community is not being practiced and perceived as a self-evident fact any longer at the highest political level in the US.”

With the passing of John McCain, Röttgen who attended the memorial alongside Bundestag president Wolfgang Schäuble and German ambassador Emily Haber, added, the transatlantic partnership lost “one of its last Mohicans”.

German Chancellor Angela Merkel had previously honored McCain as “one of the great political personalities of our time”, calling him “a tireless fighter for a strong transatlantic alliance” whose “significance went well beyond his own country.”

NATO Secretary General Anders Fogh Rasmussen, who also attended the service, had earlier proposed to honor McCain’s decades of support for the alliance by naming its new headquarters after the late senator.

That McCain, especially since the election of Trump, increasingly seemed to become an almost larger than life figure, both domestically and internationally, probably stems partly from his biography and the way he dealt with his illness.

But a key part of it is owed to the fact that many in the US and around the world viewed him as a polar opposite of President Trump, who was not invited to the funeral service, and Trumpism. McCain’s late role as one of the fiercest and most influential critics of Trump and his winner-takes-all view of the world was a constant theme of his memorial service — albeit without any direct mentioning of the current president.

“The America of John McCain has no need to be made great again because America was always great,” said his daughter Meghan McCain in poignant tribute to her late father at Washington’s National Cathedral.

Both former presidents in their eulogies for the man they competed against for the presidency also alluded to their erstwhile rival’s late role and stance.

“That’s perhaps how we honor him best”, Obama said about McCain. “By recognising that there are some things bigger than party, or ambition, or money, or fame, or power.”

“Perhaps above all, John detested the abuse of power. He could not abide bigots and swaggering despots. There was something deep inside him that made him stand up for the little guy, to speak for forgotten people in forgotten places”, said Bush.

He added in his closing remarks: “If we’re ever tempted to forget who we are, grow weary of our cause, John’s voice will always come as a whisper over our shoulder: We are better than this. America is better than this.”