The United Nations Relief and Works Agency for Palestine Refugees in the Near East (UNRWA) is an agency providing relief and humanitarian assistance supporting at least 5 million Palestinian refugees.

On 8 December 1949, the UN General Assembly adopted resolution 302 on the assistance of Palestinian refugees. It mandated continued assistance for the relief of the Palestine refugees deemed as “necessary to prevent conditions of starvation and distress among them and to further conditions of peace and stability.”

Before that in 1948, the body was named the United Nations Relief for Palestine Refugees (UNRPR).  On 19 November of that year, the General Assembly adopted resolution 212 considered that a sum of approximately $29.5m would be required to provide relief for 500,000 refugees for a period of nine months from 1 December 1948 to 31 August 1949. It added a sum of $2.5m for operational expenses.

Funds depended on voluntary government contributions, which the resolution urged to make whether from UN state members or non-members and calls were also made upon relief organisations, such as the World Health Organisation (WHO) and other UN agencies, to contribute with supplies, specialised personnel and services.

In May 1948, David Ben-Gurion declared the state of Israel sparking the Arab-Israeli War and a Palestinian exodus and the displacement of at least 700,000. The more the violent developments in the region, the more the UN sought to increase relief budget.

According to the agency, another 300,000 people including 120,000 Palestinian refugees, were made homeless or left their homes. Since then, the UNRWA’s mandate has constantly been renewed and its humanitarian mission expanded.

The UNRWA continues to be mainly funded by voluntary contributions of UN member states and is assisted by a regular budget from the UN. Its assistance to refugees includes programmes for education, healthcare, social services, infrastructure, and emergency assistance during armed conflicts.

As a civil war erupted in Syria in 2011, the UNRWA launched an emergency appeal to be able to assist some 439,000 Palestinian refugees in the country distributed between with over 120,000 fleeing to neighbouring countries, almost 254,000 internally displaced, and an estimated 56,600 are trapped in hard-to-reach or inaccessible locations.

The UNRWA required $409m, saying earlier this year that it made the call amid a “financial crisis exacerbated by the US decision to cut back its funding,” which provided 60%t of the total emergency funding in Syria.

“The lack of funding seems to be generating a lot of fear, anger and resentment. Unfortunately, it is yet another addition to a long list of historical grievances and creates a fertile ground for radical and extremists’ groups to recruit, operate and flourish,” said Mohammed Abdi Adar, Director of UNRWA Affairs in Syria. 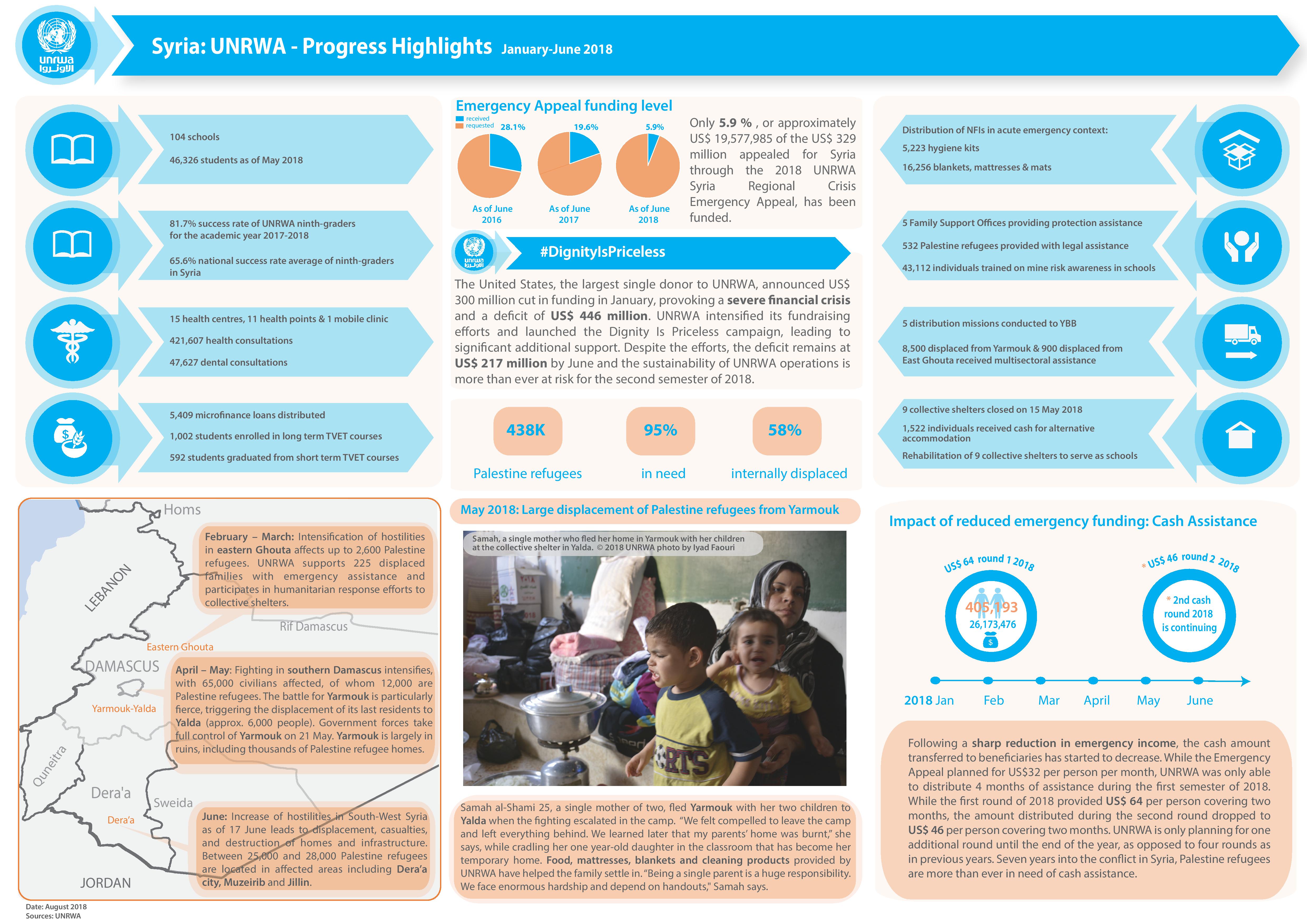 For over a decade, the US has been the largest contributing country to the UNRWA’s budget, including—until 2015—some $75m annually for projects in Gaza and the West Bank. US donations reached more than $364m in 2017.

On Friday, the Donald Trump administration decided to cut contributions to the UNRWA, saying it made a $60m contribution in January 2018.

“The United States will no longer commit further funding to this irredeemably flawed operation,” the US Department of State said in a statement, citing “failure to mobilise adequate and appropriate burden sharing.”

The statement added that the US will seek other means to commit to assisting Palestinian children wherever they live.

Repeatedly asked about the US intention to cut funds to the UNRWA and the impact of such a decision in past months press briefings, spokesperson Heather Nauert often highlighted how much the US had ben bearing the burden.

In one of the encounters with the press in July, Nauert was asked about UNRWA schools, which may not be open as scheduled and “hundreds, maybe thousands, maybe tens of thousands of kids not being able to go to school, and clinics not opened and so on, because of the withheld American funds.”

She responded that aside from the $60 million pledged to UNRWA, there were concerns about the structure and the funding streams that go into UNRWA. “In terms of what is happening with the beginning of the school year, I’m afraid I’ve just – it’s not something I’ve been extremely focused on,” Nauert stated.

As a result of US cutting contributions by at least $300m, the UNRWA said there was a budget deficit of $446m and that after fundraising the deficit remained at $217m by June, which was risky for its sustainability of the second semester.

The US had announced its intentions towards the UNRWA funding back in January, sparking a wave of humanitarian concerns. More than half of the 2 million people in the Gaza Strip, where the unemployment rate is 46%, are dependent on support from UNRWA and other humanitarian agencies, Reuters reported on 17 January.

In July, dozens of UNRWA employees protested in the Gaza Strip against layoff decisions.

“Several employees fainted when they heard they had lost their jobs. One worker poured gasoline over his body and tried to set himself on fire before he was stopped by his co-workers,” The Jerusalem Post reported back then.

The US move comes amid other historically unprecedented decisions with regards to the Palestinian-Israeli conflict including the internationally denounced December announcement to recognise Jerusalem as the capital of Israel.

Other means of pressure on Palestinians in favour of Israel were revealed by a so-called ‘deal of the century’ to end the conflict, orchestrated by Trump’s son-in-law and White House advisor Jared Kushner.

UN Chief Antonio Guterres expressed on Friday regret over the US decision, calling for the support of other countries to help with UNRWA’s financial gap so that it is able to continue vital assistance to refugees.

Stephane Dujarric, spokesperson for the secretary-general said the UNRWA “has led a rapid, innovative and tireless effort to overcome the unexpected financial crisis UNRWA has faced this year. It has expanded the donor base, raised considerable new funding, and explored new avenues of support.”

Since the US gave its hint in January, the UNRWA exerted efforts to find funding alternatives. It launched “Syria emergency appeal” citing priorities of provision of cash, food and relief items and maintaining access to basic services including education; health; water, sanitation, and hygiene.

“We are launching this campaign because UNRWA stands with you as witnesses to your historic plight. I wish to confirm to all Palestine refugees that UNRWA schools, proud schools like the one we are standing in, will remain open. Health care, and other services will be provided. It is a huge challenge, but it is absolutely imperative,” UNRWA Commissioner-General Pierre Krähenbühl had stated.

Following the US’ dramatic fund reduction, the UNRWA said that at stake was access to basic education for 525,000 boys and girls at over 700 UNRWA schools; emergency food and cash assistance to 1.7 million to extremely vulnerable Palestine refugees; access to primary health care for 3 million refugees, including pre-natal care; dignity and human security for 5.3 million refugees who endured 70 years of injustice and uncertainty.

Eleven countries rushed to deliver their funds early to the UNRWA in January. Germany reportedly pledged on Friday to increase its contribution, urging other states to work toward a sustainable finance basis for the organisation.