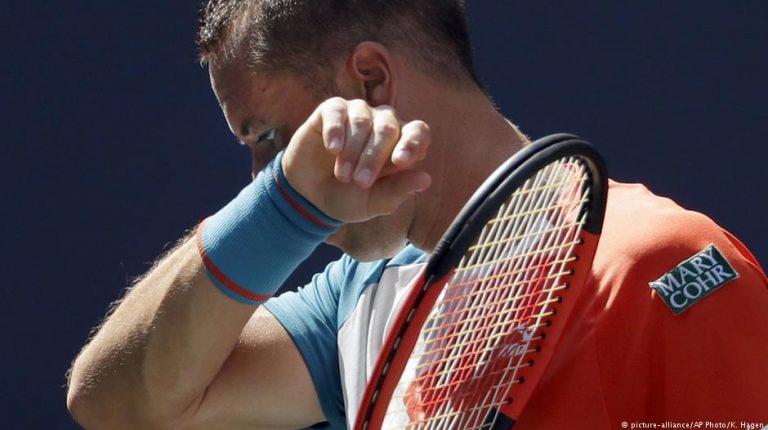 Number 21 seed Kei Nishikori outclassed Philipp Kohlschreiber to end Germany’s interest in the men’s and women’s singles draw. The Japanese player triumphed 6-3, 6-2, 7-5 over the man who beat Alexander Zverev.Nishikori, who reached the final at Flushing Meadows in 2014, made short work of his 34-year-old opponent, who has reached the quarterfinal of a Grand Slam just once in his career.

With temperatures in New York causing problems for the players, the match time of just over two hours could prove beneficial to Nishikori in the latter stages. He will now face Marin Cilic or David Goffin in the last eight.

Though he got past highly-regarded compatriot Alexander Zverev in the last round, each of Kohlschreiber’s victories at this year’s tournament have been over four sets and the physical exertions seemed to take their toll on him.

Nishikori received an early gift when Kohlschreiber double faulted and then made an unforced error in his first service game to hand his opponent the earlist possible break. Nishikori never looked back, wrapping up the opener in a shade over half an hour.

The second set followed a similar pattern with the German, who looked increasingly agitated by the heat, giving up his serve again in the opener and making a string of errors under little pressure.

Nishikori was a little less ruthless come set three, missing a simple volley to break his opponent early on. Although Kohlscreiber showed a few more signs of resistance, Nishikori took his next chance to break and, after missing his first chance to seal the match on serve, broke his opponent again before sealing the win.

Nishikori will be joined in the last eight by Novak Djokovic, who eased past Joao Sousa, of Portugal 6-3, 6-4, 6-3.

Kohlschreiber’s exit comes just two days after Angelique Kerber became the last German in the women’s draw to be knocked out. The 2016 champion’s campaign was ended by Dominika Cibulkova on Saturday.