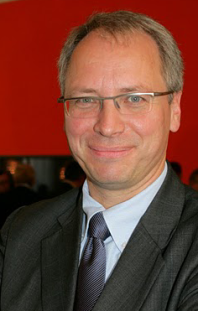 The Kreditanstalt für Wiederaufbau’s (KfW) 2018 signed loans with Egypt reach to about €200m, director of the KfW office in Cairo, Burkhard Hinz, told Daily News Egypt on the sidelines of the Euromoney Egypt Conference 2018.

He noted that the KfW is currently discussing with Egyptian partners several projects and is expecting to sign loan agreements before the end of the year.

Germany’s KfW Development Bank has funded projects totalling €6bn since it started working in Egypt in the 1960s, Hinz noted.

Meanwhile, the bank provided about €1.8bn or €2bn for ongoing projects in Egypt, he added.

“The first project among the negotiations is a 50 MW photo voltaic in Zafarana, then we are also discussing an energy efficiency project,” Hinz added.

Hence, we are also discussing finalising the energy efficiency project with €23m, with the aim of increasing the efficiency of electricity in Egypt, in order to become more relevant,” he continued.

Hinz stated that the KfW is also in discussions for a microfinance project with a total volume of about €34m.

He noted that this came in addition to the already signed agreement for small and medium enterprises (SMEs) in the beginning of the year, with the National Bank of Egypt (NBE) for funding SMEs, noting that the objective of this project in particular is supporting SMEs outside Cairo, meaning across different governorates in Egypt as financial inclusion in Egypt still needs to develop.

“We are now negotiating with the Small and Medium Enterprises Development Authority (SMEDA) to finance and start from the bottom, to go to the micro projects, providing training and financing, in order to become bigger and move from the informal sector to the formal sector,” Hinz added.

He explained that the third project, which the KfW is currently involved with SANAD Fund, is a microfinance fund, which works in the entire region with a strong focus on Egypt, and is based in Egypt.

The KfW established with the Arab African International Bank (AIIB) the SANDAH for MSEMEs, a microfinance company, he noted.

Notably, the AIIB with its subsidiaries, and SANADAH, with shares of 70% and 30% respectively, have pooled their expertise to achieve SANDAH’s vision for advancing microfinance in Egypt. In addition, the company finances commercial, agricultural, industrial, and service sectors all over Egypt.