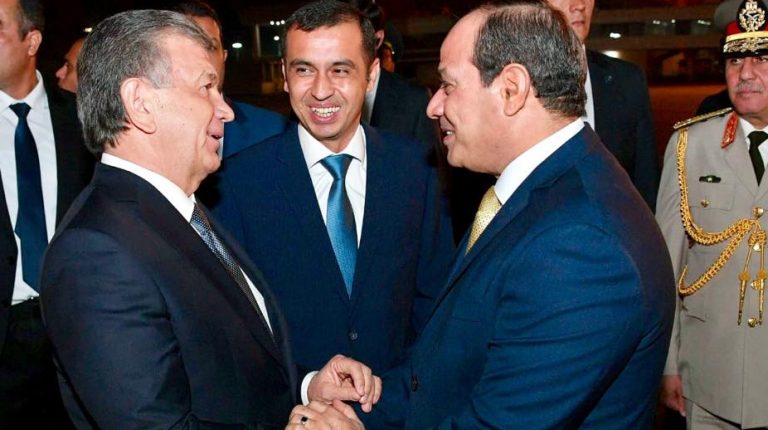 President Abdel Fattah Al-Sisi and his Uzbek counterpart Shavkat Miromonovich witnessed on Wednesday, the signing of a number of agreements and memorandums of understanding between Egypt and Uzbekistan.

In a joint statement, the two coun- tries expressed keenness in boosting and expanding cooperation in addition to the political partnership. During their meeting, the two leaders discussed several bilateral, regional, and international issues, as well as reviewing the course of implementing the bilateral agreements.

Al-Sisi expressed pleasure for visting Tashkent and desire to the visit to be the first and not the last one for Egyptian president to Uzbekistan, reviewing the Egyptian latest updates and the process of economic reform to build infrastructure for attracting investments, pointing out to the Egyptian efforts for providing great opportunities for investment, according to a statement from the presidency spokesperson Bassam Rady.

He also reviewed the situation in the Middle East and its impacts on development, stressing the importance of countering terrorism and spreading the right understanding of

Islam. The president said that countering terrorism concludes cultural sides, as well as the security and military steps, explaining that the Egyptian people have more awareness now after the hard experience in the past few years, and realised the facts behind those who use religion for achieving political benefits.

According to the statement, the two presidents agreed on the necessity of reaching political solutions for all

crises in the Middle East and Centre of Asia, in accordance with the priniple of respecting states’ sovereignty on its lands and not interfering in other states’ internal affairs. They also agreed on the importance of reaching a solution for the Palestinian issue and establishing the Palestinian state with Eastern Jerusalem as its capital.

airs in the two countries to coordinate in all strategic topics in mutual interest. Miromonovich expressed desire for boosting relations with Egypt in the economic and commercial field. He also said that his country is keening on increasing commercial exchange with Egypt 10 times more than the current level, adding that Uzbekistan could be a centre for exporting the Egyptian products to Central Asia, while Egypt becomes a centre for exporting the Uzbek products to Africa. He further added that his country is keening on establishing a joint business council with Egypt to boost the economic cooperation between the two countries. As well as increasing cooperation in tourism to benefit from Egypt’s experience in this field, in addition to countering terrorism and organised crime. Miromonovich said in a joint press conference with Al-Sisi, that the discussions addressed the available opportunities for implementing projects in agriculture, irrigation, petrochemicals, electronics, textile, and energy fields.