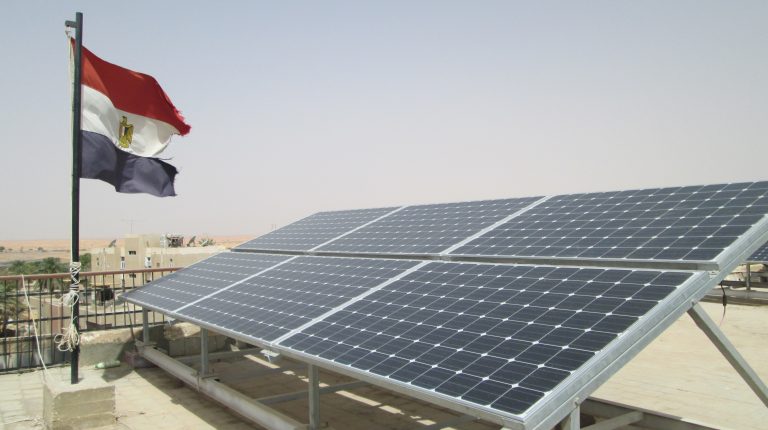 The Egyptian energy sector has been suffering since 2011, which places a significant responsibility on the government to provide additional sources for electricity to meet the domestic demand. Egypt relies on natural gas and oil for about 91% of its energy needs with the remaining 8% coming from the High Dam and 1% from combined wind and solar energy.

The energy sector in Egypt is comprised of fuel for electricity, for transportation and other resources dedicated to producing industrial power.

However, Egypt has a great capacity of renewable energy sources, yet the government decided to depend on cheaper sources despite its environmental cost. Egypt is one of the most affected countries by climate change, threatening the agricultural sector and the Nile Delta region, which is considered as Egypt’s food coffer, in addition to hosting about 30 million people.

The energy demand in Egypt is currently around 30,000 MW with a supply of a little over 26,000 MW, leaving an energy deficit of around 4,000 MW, according to Egypt’s Electricity Regulatory Authority’s annual report. Egypt is ideally placed for renewable energy generation with high sunshine duration of around 3,300 to 4,000 hours and high wind potential across Egypt’s coast, which experience average wind speeds of 7-12 metres per second.

In August, the Egyptian Electricity Holding Company (EEHC) began negotiations with the Shanghai Electric alliance on establishing a coal-fired power plant in Hamrawein on the Red Sea coast. The project comes amid international calls for stopping the usage of coal as an energy source, as it is classified as one of the most polluted sources for energy, and a main source for CO2 emissions. The Egyptian government argues that it will use “clean coal”.

The coal-fired power plant is included in the 2022-2027 plan, and its construction requires four to six years, with a goal to expand electricity production after acute shortages in the years immediately following the 2011 revolution. According to the Ministry of Electricity, the plan is to produce 6,000 MW from coal plants by 2025, in addition to the project planned to be implemented by Emirati AlNowais Investments in the area of ‘Oyun Musa’ with its contracts expected to be signed this year.

Ahmed Kenawy, assistant professor of environmental studies, and researcher at the Instituto Pirenaico de Ecología (IPE) in Spain, told Daily News Egypt that the problem with coal is that it is not a clean source for energy compared to renewable resources, which are environmentally friendly, such as solar power, wind, and waves. He pointed out that Egypt is a promising country regarding solar power, due to the long sunshine hours.

Egypt developing positively on the road to benefiting from renewable sources for energy and heading towards becoming a significant player in the renewable energy industry. According to the national strategic plan of the Ministry of Electricity, the country is investing billions of dollars into novel renewable energy projects, in order to facilitate the development of wind and solar power plants across the country.

The national plan committed to increase Egypt’s share of renewables in the country’s power mix to 26% by 2022 and 37% by 2035, in order to attract foreign investment, as well as meet domestic demand for energy, out of which 6% comes from hydro sources, 12% from wind energy, and 2% from other renewable energy sources, especially, solar energy.

Recently, the government also announced its renewable energy plan for 2035 to include an addition of 67 GW (representing 45% of total generated electricity), of which 31 GW come from PV (photovoltaic), and 20 GW from wind.

According to the plan, the solar energy sector aims to install 3.5 GW by 2027, including 2.8 GW of PV and 700 MW of concentrated solar power (CSP). The strategy also plans to generate 7.2 GW (12% of generated electricity) from wind by 2022. The plan envisions significant private sector involvement, noting that the private sector will take the lead on 67% of it. Over the next three to five years, the ministry of electricity and renewable energy plans to add 51.3 GW to the current installed capacity.

“Utilising renewable energy is part of a national plan to diversify electricity generation sources to meet growing demand and secure the continuity of the electricity supply…Egypt has a great, untapped potential to turn into an international renewable energy hub,” said Ayman Hamza, spokesperson for the Ministry of Electricity.

One of Egypt’s biggest projects in renewable energy is the solar power plants in Benban, Aswan. The government launched the renewable energy feed-in tariff programme in 2014 to establish projects to produce electricity from wind farms and solar power plants with a total capacity of 4,300 MW, with investments of $7bn. This includes 2,300 MW from solar power, including 300 MW from plants, which produce less than 500 KW. In addition, the programme includes 2,000 MW from wind farms.

The Wind and Solar Atlas of Egypt points out that there are opportunities and potential for wind and solar plants in the east and west Nile areas which will produce around 31,150 MW from wind and 52,300 MW from solar energy.

The European Bank for Reconstruction and Development (EBRD) and the Green Climate Fund (GCF) plan to make a great contribution in the renewable energy project in Egypt worth $1bn. The bank said it would provide $352.3m while the GCF would finance $154.7m. The total cost of the initiative is estimated at $1bn and is expected to be covered by additional funds from sponsors and other lenders.

Moreover, the Asian Infrastructure Investment Bank (AIIB) announced that it will provide about $210m to finance a renewable energy project in Egypt, including the construction of 11 green field solar power plants with a total capacity of 490 MW. The project will increase Egypt’s capacity to generate energy and reduce reliance on gas and fuel to generate electricity, which would help in meeting the commitments of the Paris Climate Agreement.

The programme will also increase Egypt’s generation capacity, whereby it can export energy during peak hours and improve its connectivity in the Middle East, Asia, Europe, and Africa, according to Jagatheesa Pandian, vice president and chief investment officer of Asian Infrastructure Investment Bank. Egypt’s huge solar resources with its strategic green growth vision, will allow this project to generate global environmental benefits by avoiding Greenhouse Gas (GHG) emissions by over 500,000 tonnes of CO2 per year, according to the statement.

Numerous people in Qena and Luxor governorates in Upper Egypt started using solar energy in their cultivated land to provide water for irrigation. Ahmed Abdulraheem, 44, from Al-Hajer in Qena, has attempted to use the first solar power in Upper Egypt. He told DNE that he decided to rely on solar power after repeated electricity cuts.

Abdulraheem explained further that solar power provides his house and land with stable electricity by about 230 volts. The solar power station cost him EGP 8,000 and he currently pays less than what he has used to pay for electricity per month, a difference of EGP 100  instead of EGP 200. He considers solar power as the project of the century as it saves money and other energy sources, in addition to the environment, calling for support to generalise his experience in providing water for agriculture by using solar energy.

To irrigate his 10 feddans, Hassan Agoura from Al-Hajer also established a solar power station, which cost him EGP 180,000. He told DNE that the station saves him EGP 25,000 annually as he used to pay EGP 2,500 for irrigation per season, but now with his new solar station he cultivates his land for two seasons.

Hambach: the battle between a forest and a coal mine threatens Germany’s environmental image