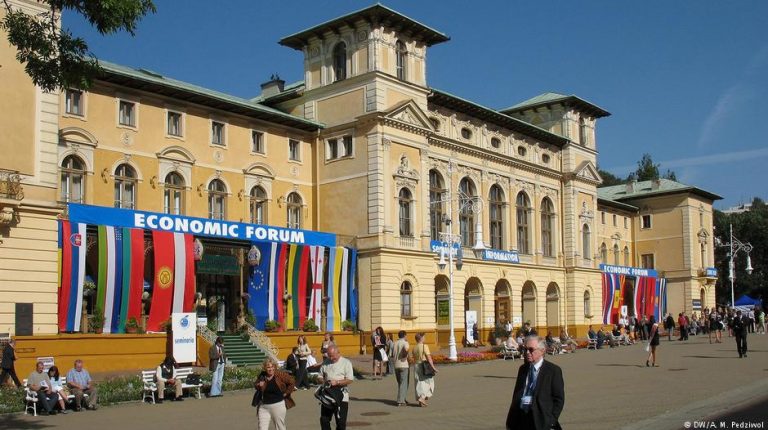 The Polish Economic Forum in Krynica-Zdroj is often dubbed “Poland’s Davos,” offering a wide range of debates on global or regional economic issues. DW’s Jo Harper shares his personal view on the gathering.Imagine being stuck on a long plane journey with Roger Stone on one side and Ivanka Trump on the other. Then, when you try to change seats, you realize the whole plane is full of Roger and Ivanka clones.

It’s three years since I last visited the Polish Economic Forum in Krynica-Zdroj in southern Poland. I vowed then never to come back and after a tortuous almost 4-hour bus journey from the capital, Warsaw, to the small spa town near the Polish-Slovakian border, I remembered why.

See the forceful business women in sharp suits sip skinny latte coffees and smoke skinny cigarettes. See the startups start up here, the block chains there. Everyone mixing the blue suits and the brown brogues.

What was once cool and different is now just another uniform for the aspiring entrepreneur. The eccentric entrepreneur is now ubiquitous. Red or green socks and the obligatory unkempt hair. The odd dinosaur wanders lost among the throng, the purple-suited mustachioed relics of the early 1990s Polish business world.

Long-legged girls in short skirts wander around handing out chocolates and apples. Short-haired goons glare into the crowd. Other businessmen who look a lot like what one might imagine a Russian gangster to look like mill around. Donald Trump would fit right in.

The prezes, the CEO — roles seem to be awfully important here. One man and his leadership, surrounded by fawning and aspiring middle managers and pretty secretaries. Always marching, led by the Big Man, to some important event or another. A lot of back-scratching, peacock strutting, peeing contests. The winner-takes-all attitude smacks from the first moment.

Direct and lacking in much semblance of humility, the world here is one where wearing the wrong suit can mean social exclusion. Botox and plastic surgery booths are not here on show, but the whiff of self-improvement is everywhere.

Poland has come a long way since 1989, no doubt, and Krynica perhaps doesn’t do justice to that fact. But Krynica seems to be the place new money comes to show itself. To be seen, to show how smart it is, in all senses.

Organizers say the event has about 4,000 guests and the small town is packed. The three days are a mass of panels.

Throw in a few foreigners and you get the feeling it’s a really international affair. The shrill and entitled sound of British voices filter through wherever one goes in the world. And Krynica is no exception. The Financial Times correspondent interviews the British minister on one panel about Brexit.

Russian bodies with sharp elbows and little by way of gentility slump aggressively in another. The Chinese delegations seem like they are on well-drilled military exercises.

Poland seems to have arrived

So, the Polish brand. It was easy to love Poland when it was a poor, beleaguered but essentially a European neighbor in need. So easy it was to feel sorry, to look slightly down one’s nose at those learning the capitalist game. They came to learn, to pick up the style, to learn the lingo. But now, where is Poland?

It seems to have arrived. It is now a middle-income country, well placed and reasonably balanced economically. It has all the trappings of a Western country. But when you cease feeling sorry, what do you feel?

It feels like a rather brutal, parochial place. It says, we have arrived, look at us. The locals don’t seem much enamored of the visitors either. Service culture is a distant memory for urban visitors in these parts. Perhaps that’s its charm, but it jars with the “Poland — Open-For-Business” mantra that seeps through almost all panel discussions.

Invitations to non-business actors, the prospect of civil society and NGO actors on show seems to have disappeared. Perhaps that window-dressing is also no longer needed. Business after all is all about what you can get out of an unfair world, a zero-sum game of social Darwinism. I might like to come back to Krynica next year, but probably not.