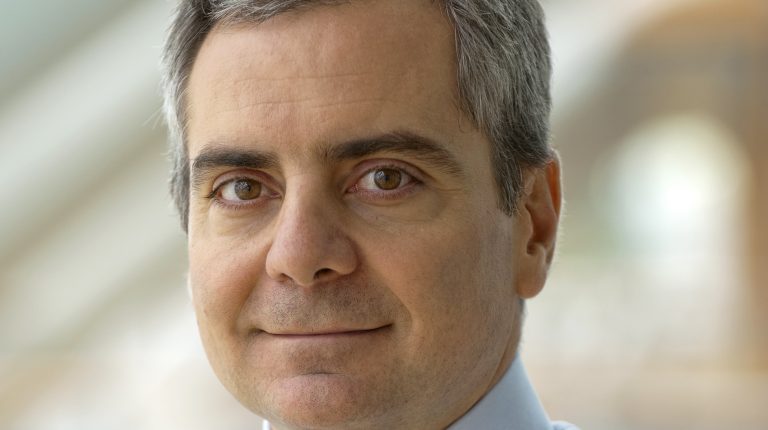 DNE sat down for an interview with Scannapieco, the transcript for which is below, lightly edited for clarity:

Can you mention expected amount of finance to be provided to Egypt this year, for how many projects?

In 2018, until July, we signed finance agreements totalling €521m to support private sector development (two credit lines of €395m to both the National Bank of Egypt (NBK) and Alexandria Bank) and improve sanitation services in the Fayoum governorate worth €126m.

The board of the EIB approved more projects that are expected to be signed by the end of 2018 such as the Kitchener drain project with a fund of €214m and more finance to private sector support with an amount of €375m.

In addition to our finance, we signed technical assistance agreements of €1m to provide support for targeted small and medium sized enterprise (SMEs) lending mainly start-up companies and young entrepreneurs. The support involves improving the local bank’s capacity to develop, monitor, and increase a sustainable credit portfolio to SMEs and midcaps.

Can you share overall size of EIB’s investments in Egypt?

The EIB is a leading financier in Egypt with a signed exposure of nearly €4.6bn. Over the past 40 years, the EIB has provided a total of €9.2bn to 124 operation in the energy, water, wastewater, transport, urban development, agriculture, industry, and to the private sector development through credit lines or equity investments.

EIB allocated €1.8bn to region.What Egypt’s share accumlated to, in what sectors? When will it be signed?

Indeed, under the Economic Resilience Initiative (ERI) and with support from the European Commission and European Union (EU) member states, the EIB scaled up its financing activities in the EU neighbourhood considerably.The bank approved 19 projects of €1.8bn in the Southern Mediterranean region under the ERI, of which four projects are in Egypt with a total value of €192m. The four projects are: Fayoum’s Wastewater Expansion, €172m on two tranches of €126m and €46m; credit lines to the Alexbank, €20m; the Export Development Bank, €28m and Egypt Gulf Bank, €18m. Those finance agreements are already signed, and we are looking into more operations.

Under the ERI, the EU bank is increasing its funds to €6bn during the 2016- 2020 period. This increase is expected to mobilise and support additional investments by €15bn. This comes on top of the €7.5bn of already foreseen in the Southern and Eastern EU neighbours.

Alongside increased funds, the EIB will offer additional concessional finance, enhanced support to the private sector, and technical assistance.

The ERI assists the EIB in reaching out to a wider range of beneficiaries and increasing support to sectors, which are typically challenging, in order to support the EIB’s current operating model, for example, due to the high-risk nature of operations, despite high socio-economic returns. This is true for education, health, support to young entrepreneurs, and in general investments, which allow for improvements to the livelihood of communities, especially in underserved regions. Will you increase funds allocated for Egypt in coming years?

Thanks to the ERI and the EIB’s commitments in the region, our investments in Egypt are due to scale-up until 2020, compared to the previous three years. 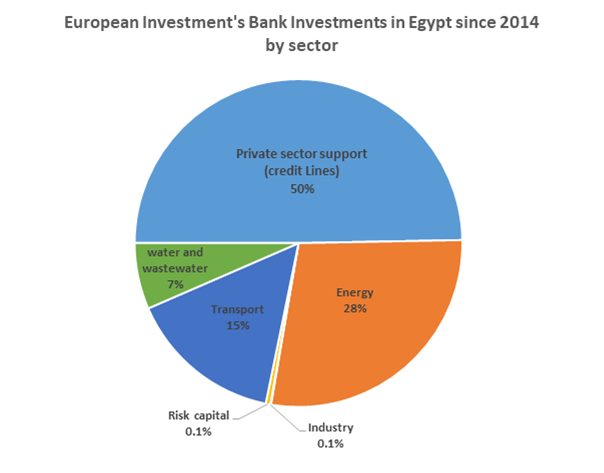 What current projects bank committed to in water, wastewater sector? How many projects, how much fund amount to?

The EIB provided total funds of €660m to 11 water and wastewater projects in Egypt. Recently we signed a finance agreement of €126m with the Egyptian government to improve the wastewater infrastructure and access to it in the Fayoum governorate in Egypt. The Fayoum wastewater expansion project which comes under the EIB’s new ERI, aims at improving health and living standards of 800,000 people and stimulating economic activities in the Fayoum governorate. The project will be implemented in two phases from 2018-2025.

It involves the construction of eight new wastewater treatment plants, the expansion of nine existing wastewa- ter plants, construction of associated sewerage networks, including 139 new pumping stations for currently unserved rural villages, and the provision of on-site sanitation facilities and evacuation trucks for around 400,000 people.

Furthermore, we signed a finance agreement of €77m with the government of Egypt to finance the Kafr El- Sheikh wastewater treatment project. The investment will be used to construct two new wastewater treatment plants and to expand three existing plants, in addition to preparing about 690 km in the sewage system with an installation of 52 pump stations in the Kafr El-Sheikh governorate. The bank offered preparatory technical assistance from its own funds to get the project started. Technical assistance covered preparation and implementation of the project, transition into the operation phase, and support to the Kafr El-Sheikh Water Supply and Sanitation Company in creating capacities among its personnel to manage sanitation projects. Technical assistance and support for preparation of the investment started in 2011/12. Construction works started last year, and the Kafr El- Sheikh project is expected to be operational in 2020.

Recently the EIB board approved a finance of €214m to the Kitchener drain depollution project in the Delta region and is expected to sign the project by the end of this year.

Can you state amount of fund allocated for SMEs? How important this project type in economy like Egypt?

The private sector can drive sustainable growth and create job opportunities needed in Egypt. Our funds to SMEs and Mid-caps is channelled through intermediary banks and financial institutions. The bank has significantly contributed to SMEs support in recent years, primarily with leading banks in the country. For example, under the ERI we signed a €20m credit line with the Alexbank to support SMEs and Mid-caps. Also, we signed €375m with the National Bank of Egypt.

Furthermore, we invest in private equity to support start-ups and entrepreneurship. Our portfolio in the Middle East region is €420m (of which 16% is to Egypt specifically and 46% is to regional countries). In 2017 we invested in an Egyptian Fund called the ‘Mid-Cap Fun’ targeting the growth of capital investments in Egyptian SMEs seeking to expand their businesses at above average growth rates. And we are looking into more investment funds, which support start-ups and entrepreneurship. 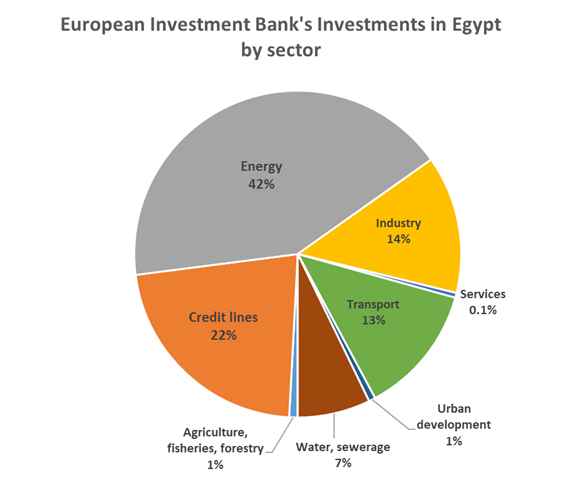 How much fund volumes amount to allocated for energy sector, traditional, renewable? How many projects?

The EIB has provided €3.9bn to 36 energy projects in Egypt. Recent examples of the EIB’s funds include projects either to improve energy efficiency or to generate renewable energy. For example, the Egyptian Pollution Abatement Programme III was worth €70m to finance public and private industrial companies, which will invest in pollution abatement technologies while assisting the industry in complying with environmental regulations.

The windfarm in the Gulf of Suez is another example. The EIB signed a finance agreement of €115m to further expand energy generation from renewable resources.

Besides, the Al Shabab power plant cost €205m to finance the project. the plant consists of the conversion of an opencycle power plant to combinedcycle gas technology. It will significantly

improve the generating efficiency of the power plant, resulting in an increase in capacity to 1500 megawatts representing a 50% increase in electricity output, in order to meet the growing electricity demand at a competitive cost and with a low environmental impact.

How grand fund size allocated for Egypt’s transport sector? In addition, tell us more details about Cairo metro project, fund allocated for it?

Overall, we have provided €1.8bn to 11 operations in the transport sector in Egypt. Examples of our finance includes the Cairo metro project, which received our finance to the extension of line two, line three, phase three, and recently the rolling stock and we are discussing with the Egyptian government a new loan of €350m for the upgrade and renovation of line one.

Any pre-feasibility studies currently present which you conduct on specific projects? Details on that?

The EIB has provided copious technical assistance programmes for either prefeasibility, capacity building or project management. For example, we provided finance to conduct a study, in order to develop a viable project proposal for the creation of an East Port Said Logistics Centre.The study will result in a comprehensive set of technical documentation at a feasibility study level for the East Port Said Logistics Centre, covering its market, technical, environmental/social, economic, financial, and institutional aspects.

In addition, we are financing a study to explore how to increase the connectivity of the East Port Said region to Greater Cairo. Enhancing the corridor logistics competitiveness is one of the main objectives of the Suez Canal Economic Zone Master Plan. The study will result in a transport-demand assessment for the Suez Canal transport interconnection with greater Cairo.

Can you share bank’s strategy for Middle East region? Also elaborate on current situation of cooperation in region in terms of funds, projects?

As the bank of the EU, we are a policy oriented bank. We contribute to achieving Southern Neighbours’ development goals and objectives by assisting governments to meet their investment needs. These needs are articulated around two themes: improving socio-economic infrastructure, and supporting private sector development. The overall goal is to create new job opportunities and promote sustainable economic growth to improve the livelihood of people. We have been performing this function consistently throughout the years, in cooperation with local authorities and other international financial institutions.

For over 40 years, we have mobilised the EIB resources and expertise to target private, as well as public sector projects, which can contribute to the process of economic and social recovery in Mediterranean countries.

Moreover, recently the EIB has been stepping up its activities to reinforce economic resilience in countries most severely impacted by the current refugee and migration crises, and to contribute to tackling root causes of migration through supporting sustainable development. The EIB’s new ERI for Europe’s Southern Neighbourhood and the Western Balkan countries is evidence of this commitment. And we always seek to cofinance projects together with the EU, international financial institutions, and development financial institutions.

Finally, can you share your opinion regarding recent reforms taken by GoE related to tax reform, subsidy, economic legislations, exchange rate, other policies?

Egyptian authorities have been implementing an ambitious economic reform programme and have taken decisive measures to restore macroeconomic stability and sustainable public finances. The third IMF review showed that economic activity has been gathering strength, budget deficit is narrowing, foreign currency shortages have disappeared, and growth is accelerating. Furthermore, annual inflation declined from 33% in mid-2017 to around 13% in April 2018.

The IMF’s third review praised recent economic developments and near-term growth outlook is favourable, supported by recovery in tourism and rising natu- ral gas production, while the current account deficit has fallen below 3% of gross domestic product and gross international reserves stood at seven months of prospective imports at end-May.

This was reflected in international rating agencies’ outlook for Egypt. Standard and Poor’s Global Ratings raised Egypt’s credit rating to B+ in May 2018, as strong measures taken to stabilise Egypt’s econ-omy increased its stature in the debt market. Recently Fitch Ratings affirmed Egypt’s Long- Term Foreign-Currency Issuer Default Rating at ‘B’ with a ‘Positive Outlook’. This reflects the world agencies’ appreciation of the economic reform programme carried out by the government.

Building on reform efforts (eg floatation of the currency, improved licencing process ,new investment, and bankruptcy laws) and the restoration of confidence, Egypt has the opportunity to transition to a higher growth levels, and increase prosperity for all, by locking in gains from macroeconomic stabilisation and harnessing its full growth potential. Both local and international investor sentiments are positive to noticeable improvements of the business climate in Egypt.

US Open: Kohlschreiber exit means no Germans in last eight