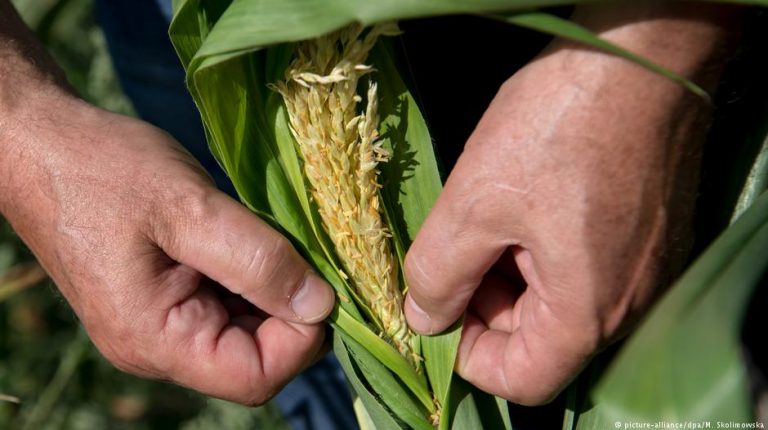 German farmers are no strangers to the elements, but this summer has brought home the realities of climate change, and the need to start adapting. How can farmers adapt to the changing conditions?Carved into a block of wood and given pride of place in the parlor of an old farmhouse 100 or so kilometers (around 62 miles) northwest of Berlin, is a quote from Johann Wolfgang von Goethe: Was du ererbt von deinen Vätern hast, erwirb es, um es zu besitzen.

From his place at the head of a solid wooden table, farmer Hans-Heinrich Grünhagen recites the words that were also a feature of his western German childhood home.

Loosely translated, they mean: To own your inheritance, you have to use it well. He interprets them as a reminder of his “duty” to tend the land in his custody with such care, that when it passes to his children, it is in better condition than when he took it on.

As a young man, Grünhagen left Lower Saxony and the family farm that dates back to the year 936 and has been running his own place in Germany’s former East for almost three decades. During that time, he has seen changes, not only to his farm and the lively village where it’s located, but to the country’s political, societal and, increasingly, climate landscape.

“I’m not talking about the extremes, because we’ve always had them,” he told DW, “but about the growing period, which now starts earlier in the spring, even when we have a late winter like this one, when it was still very cold in January and February.”

His is an arable farm of 1,300 hectares (3,212 acres) — part conventional, part organic — that grows 19 crop varieties including grains, peas, hemp, Jerusalem artichokes and corn. One of his signature plants is the humble potato, which has struggled to survive in this summer of no rain and temperatures edging towards 40 degrees Celsius (104 degrees Fahrenheit).

“Potatoes don’t like temperatures above 25 degrees, they stop growing properly,” he said, adding that he invested in an irrigation system a few years ago. “It doesn’t stop the heat, but at least it keeps the plants alive.”

Where possible, he has begun to switch to varieties that lend themselves to warmer weather. But even that hasn’t worked this year.

“We planted corn, but it was so dry that it didn’t even germinate. The field is empty.”

For those crops that do germinate, there is still the very real threat of late spring frosts heavy enough to wipe out young plants that have been seduced into premature existence by unnaturally warm daytime temperatures.

“Grains start to grow earlier than they used to, the ear might already be in the stalk when there’s a night frost,” he said. “That means the ear dies and you’re left with nothing.”

From the grain to the grape

Hundreds of kilometers south-west, in the wine growing region of Rhein-Hesse, vigneron Adolf Dahlem is looking for ways to overcome similar challenges that he says are “undeniably” linked to climate change.

“The first really bad year was 2003. Nothing but sun for months on end,” he told DW. “We’ve had several early and warm years since then, and the gaps between them are getting shorter and shorter.”

Though unremitting sunshine might sound like a wine grower’s dream, it’s more complex than that. Apart from the same problems of plants that produce shoots before the fatal frost season is over, vignerons in the region are grappling with new strains of pests and ever earlier harvests.

When Dahlem was a child, the grapes were picked in October. But in recent years, the annual event has moved into September and even August.

“This early harvest goes hand-in-hand with high temperatures,” he said. And therein lies the problem. “If we’re harvesting when it’s around 30 C, the grapes and the must will also have a temperature of 30 degrees.”

Though Dahlem tries to harvest at night and in the early morning when the fruit is cooler, it takes “a highly technological and energy-intensive process” to keep the grapes at the right temperature to achieve “the unique harmony of fruit and acidity” for which the region’s riesling is famed.

Some growers see an opportunity to experiment with different grape sorts to make red wines atypical for the region, but Dahlem says there’s a real desire in the community to find ways to keep on producing top-quality riesling.

“We will try to adapt,” he said. “But it is really very hard to meet the market’s expectations.”

From the ground up

And that is becoming a common refrain. Hans-Heinrich Grünhagen anticipates a 50 percent drop in yield this year.

“It has consequences for the agricultural industry, for those who buy our grain or the starch factory that processes our potatoes.”

All he can do, he says, is to try and adapt to the changing conditions, to be selective in the crops he sows, to irrigate where possible, and to ensure his soil is as healthy as it can be.

For the chairman of the German Federation of the Organic Food Industry (BÖLW), Felix zu Löwenstein, the state of Germany’s farming land is a pressing issue.

He believes the country’s agricultural system has been due a complete rethink for some time, but that climate change brings the need for a “radical” overhaul into even sharper relief.

Citing the increasing incidence of extreme weather events such as drought and heavy rainfall, he says it’s untenable to “pretend that everything has to stay as it was, and from time to time ask for some public money to keep us alive.”

He sees soil fertility, increased humus content and reduced soil compaction — both of which make it easier for the ground to absorb and store water — increased biodiversity and crop rotation as potential measures for long-term change.

Many farmers have hit back at him for vocalizing these thoughts at a time when the relentless heat of the past months has filled many with an existential angst.

“They take it as a reproach,” he said, “and it makes me sad because that’s the last thing I want to do.”

What he does want though, is to use the extremity of this summer as a catalyst for an earnest discussion about the future. He sees EU plans to rework its Common Agricultural Policy (CAP) by 2020 as an opportunity to stop paying subsidies on the current per hectare basis under which large farms stand to benefit the most.

“We have to switch to a policy where farmers are paid for a service they’re providing,” he said. “For measures that increase biodiversity, that make farming and food production more resilient.”

Read more: Opinion: The German farmers who moan until the cows come home

Grünhagen, however, fears that a loss of the current subsidy system would lead to fallow land.

“In this region, we have light soil which means the earning potential is relatively low,” he said, adding that the subsidies are a lifeline for many farmers. Without them, he predicts summers where “large swathes of brown land” stretch across the country because farmers would simply give up.

He hopes it won’t come to that, and for his part, vows to continue adapting and tending his land in keeping with his interpretation of Goethe’s words, and with enough care to ensure there is something to pass onto the next generation. Even in the face of climate change.