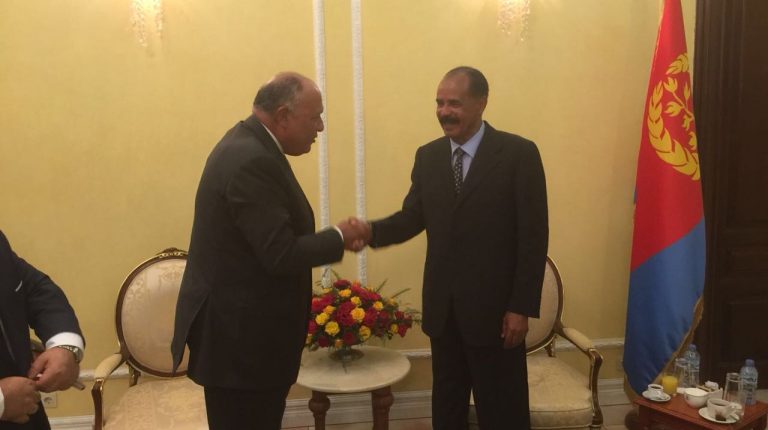 Eritrea’s President Isaias Afwerki has stressed the significance of Egypt’s role in the Horn of Africa, during Egypt’s Foreign Minister Sameh Shoukry visit to the capital Asmara.

Additionally, Afwerki expressed his appreciation for the historical relations with Egypt, expressing his country’s readiness to enhance bilateral cooperation, according to Egypt’s Foreign Ministry’s statement.

Shoukry on Thursday met with Afwerki and delivered him a message from President Abdel Fattah Al-Sisi aiming at boosting bilateral relations between the two countries.

Both addressed recent updates in the Horn of Africa and expressed their keenness on maintaining stability in the region, the statement continued.

Furthermore, they discussed the maritime security in the Red Sea and bilateral bolstering corporations and coordination, as well as situations in Somali, Yemen, and South of Sudan. They also tackled recent updates of the Grand Ethiopian Renaissance Dam negotiations.

Notably, Shoukry’s visit came following the latest improvements in the relations between Cairo and Asmara and the signing of six agreements, according to an earlier statement by Egypt’s Foreign Ministry spokesperson Ahmed Abou Zaid.