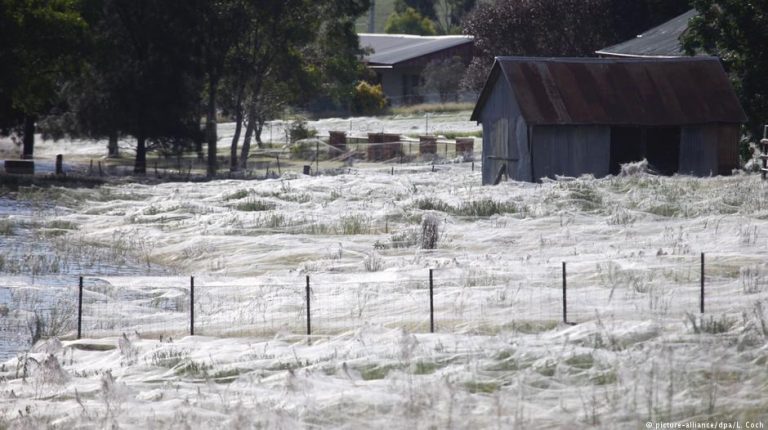 Beautiful – or an arachnophobe’s nightmare? Either way, reams of spider silk covering an Australian town was an unusual and arresting sight.For some, the swathes of spider silk blanketing fields turned landscapes into beautiful snow-like scenes; for arachnophobes, it looked more like a living nightmare.

This is what confronted residents in Wagga Wagga in eastern Australia after floodwaters swept through the town in 2012 following a week of record rain.

Not only were thousands of people forced to flee their homes because of the floods – but masses of the ground-dwelling spiders also had to evacuate to higher ground.

To escape, the fleeing creatures – a type of wolf spider – can produce an individual strand of silk to catch the wind like a parachute.

This allows them to fly up and away into the air to travel over long distances, in what is called “ballooning.”

So the huge blanket of silk was the result of the spiders all trying to balloon away from the flooding en masse – earlier reports of webs covering fields were inaccurate, because wolf spiders don’t produce webs.

Unlike other spiders, which make webs to catch prey, wolf spiders instead run and pounce on their victims.

This kind of wolf spider, which measures up to 1cm long, is considered relatively harmless and is usually very solitary – but the extreme flooding forced them to all escape together and therefore come into close contact with another.

There are thought to be 130 species of wolf spider in Australia alone. But sights like the one produced in Wagga Wagga in 2012 are rare.