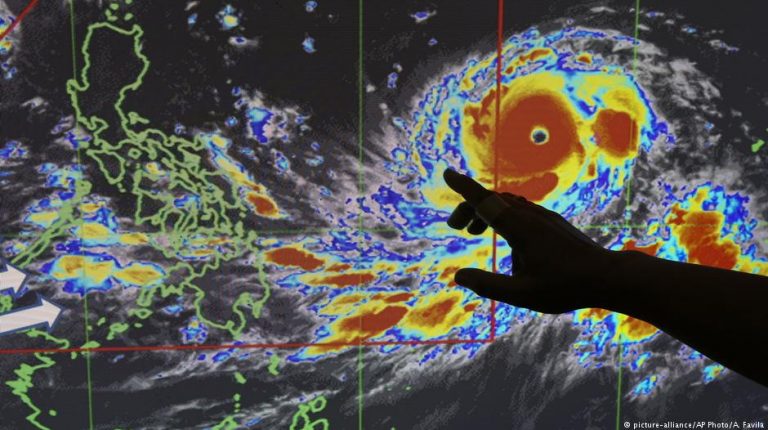 The ‘monster’ Typhoon Mangkhut has crashed into the northern Philippines coast, prompting a mass evacuation. The storm is also expected to batter southern China.Philippine officials said late Friday that the Typhoon Mangkhu had hit the country’s northeastern coast.

A massive evacuation had been underway earlier as the typhoon barrelled toward the area. About 5 million people are at risk from the storm, according to the Hawaii-based Joint Typhoon Warning Center.

The center said that the typhoon’s winds are equivalent to a category 5 Atlantic hurricane. It has a huge raincloud about 900 kilometers (560 miles) wide.

‘You can’t even crawl’

Government forecaster Rene Paciente issued a warning about the force of the winds: “It can lift cars, you can’t stand, you can’t even crawl against that wind.”

Paciente also cautioned residents that even if the typhoon weakens after making landfall, it will remain incredibly destructive.

Those who live in the typhoon’s projected path and cannot flee have been reinforcing their homes and stocking up on food.

Southeastern China has also been taking precautions, as the typhoon is expected to reach its mainland by Monday morning. More than 3,000 shelters have been set up in the southern Guangdong province, and more than 100,000 residents and tourists have either been moved to safety or sent home.

The area has seen its share of catastrophic typhoons in recent years, the most severe of which was Typhoon Haiyan in 2013. More than 7,300 people in the Philippines were killed, entire villages were destroyed, and more than 5 million people were displaced.