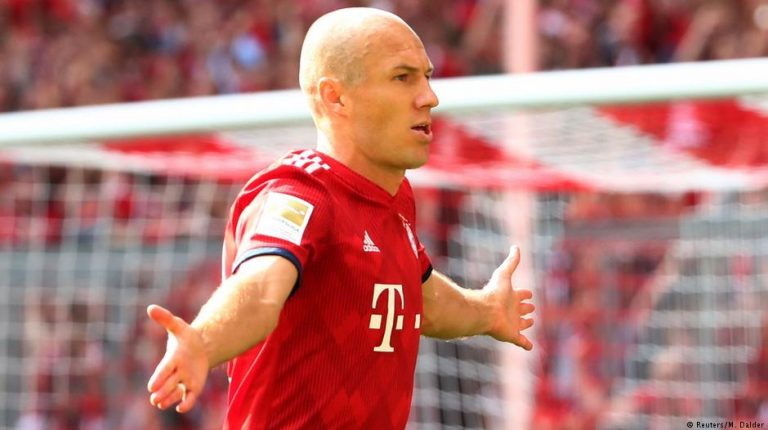 After a furious start in which the visitors took a shock lead from the spot, Bayern took full control against Bayer Leverkusen and took all three points thanks to goals from Corentin Tolisso, Arjen Robben and James.Bayern Munich 3-1 Bayer Leverkusen
(Tolisso 10′, Robben 19′, James 89′ – Wendell pen 5′)

Goals from Corentin Tolisso, Arjen Robben and James Rodriguez turn the game around for Bayern after Leverkusen took an early lead from the spot through Wendell.

The visitors were reduced to ten men in the second half when Karim Bellarabi saw a straight red for a foul on Rafinha after being on the pitch for less than ten minutes.

Heiko Herrlich’s team never looked like getting back in the game and find themselves bottom of the Bundesliga with three defeats from three – nowhere near good enough for a club with Champions League aspirations.

90+3′ A question we’re all asking ourselves!

90′ There will be four minutes of added time.

89′ GOAL! Bayern Munich 3-1 Bayer Leverkusen (James)
And we have a late goal in Munich, too. Robben feeds Thiago who chips back into the box from the by-line for James to head home Bayern’s third. 3-1, game over.

87′ There has been a flurry of late goals around the country! See the live scores above!

82′ Substitution for Bayer Leverkusen: Leon Bailey is replaced by Paulinho
Heiko Herrlich replaces a forward with a midfielder. It looks like Leverkusen are just going to settle for not getting hammered.

82′ Substitution for Bayern Munich: Rafinha is replaced by David Alaba
The Brazilian cannot continue and is helped off the pitch.

80′ RED CARD – Karim Bellarabi (Bayer Leverkusen)
He’s not even been on the field for ten minutes but Bellarabi sees a straight red for stamping down on Rafinha’s heel. That was dangerous and the Leverkusen man can have no complaints.

78′ Brandt has moved up front as a loan front man for Leverkusen, with Bellarabi and Bailey on the wings. But Leverkusen will need to get hold of the ball if they’re to do anything in the final stages.

76′ Otherwise, there’s very little going on here! Bayern are still moving the ball around, Leverkusen sat deep, and the Bayern fans are singing about the European Cup – they travel to Lisbon on Wednesday to face Benfica.

65′ A quick look at the stats: Bayern have had 11 shots to Leverkusen’s two, plus over 70% possession. One way traffic.

63′ Lewandowki dances around looking for space in the box and finally gets a shot away, but defenders throw themselves in the way.

54′ Robben again cuts in from the right and appeals for handball against Sven Bender – but the ball hit the Leverkusen defender on the shoulder and referee waves play on.

53′ Anti-DFB chants echo back and forth between the Bayern Munich ultras in the Südkurve and the Leverkusen fans in the away end.

47′ And Bayern’s first chance of the second half comes straight away as Gnabry heads towards goal. Hradecky saves but the flag was up for offside anyway.

SECOND HALF
We’re back underway in Munich

HALF-TIME: Bayern Munich 2-1 Bayer Leverkusen
After a furious start in which the visitors took a shock lead from the spot, Bayern have taken full control of proceedings and lead thanks to a stroke of individual genius from Arjen Robben. Less positively, Corentin Tolisso has been taken off injured.

43′ Boateng plays in Lewandowski with a penetrative through-ball from the back. The Pole tries to flick the ball on to James but Leverkusen can clear.

39′ Tolisso is down following a clash of knees with Volland. Whether he’s twisted something or it’s just a painful coming-together, is still unclear …

38′ Volland gets a chance to stretch his legs down the left and crosses low but Boateng clears before the ball can reach Leon Bailey.

32′ After Wendell loses possesion in the left-back position, Müller immediately feeds Robben who cuts inside onto his left foot but curls a shot just wide. A textbook transition from Bayern. Leverkusen will be happy if they can get to half-time just one goal behind and regroup for the second half.

30′ Hradecky pulls off a good save from Thomas Müller’s long-range effort.

28′ Substitution for Bayer Leverkusen: Lars Bender is replaced by Julian Brandt
Bender seems to have picked up a knock and Herrlich opts for an offensive change.

26′ When faced with two lines of defenders, sometimes you have to rely on moments of individual quality and that’s exactly what Bayern have done here. Leverkusen can’t get out of their own half as Bayern spread the ball around, making their opponents run and tiring them out. Down on the touchline, Heiko Herrlich motions for his team to move up the field.

19′ GOAL! Bayern Munich 2-1 Bayer Leverkusen (Robben)
Tah heads Kimmich’s cross straight into the path of Arjen Robben. In one fluid motion, the Dutchman flicks the ball up with his first touch before smashing an unstoppable volley into the top corner with his second. That was pure class, pure and simple.

18′ After that action-packed start, Leverkusen have settled into a defensive 5-4-1 formation, allowing Bayern to have possession (81% of it!) and hoping, presumably, to catch them on the counter-attack.

10′ GOAL! Bayern Munich 1-1 Bayer Leverkusen (Tolisso)
Tolisso drives into the box but his first effort bounces back off Jonathan Tah and straight back into the Frenchman’s path. This time, he makes no mistake and fires Bayern level.

5′ GOAL! Bayern Munich 0-1 Bayer Leverkusen (Wendell – pen)
Wendell fires home to Manuel Neuer’s left and Leverkusen have an early lead … but let’s take a look at what’s happened:
The original penalty was given correctly when Kevin Volland’s cross struck Thiago’s raised arm in the box. Volland stepped up himself but saw his weak shot easily saved by Neuer.

But referee Tobias Welz ordered the kick to be retaken – also a correct decision with four or five Bayern players having encroached into the box.

This time, Wendell took responsibility and made no mistake. What a start.

4′ PENALTY MISSED – BUT WILL BE RETAKEN

KICK-OFF!
We’re underway in Munich – and across the day’s other games.

Goalkeeper Lukas Hradecky makes his first appearance for his new club, but Julian Brandt starts on the bench.

Serge Gnabry makes his first start for Bayern on the left of a front three. Corentin Tolisso gets the nod in front of the back four while Niklas Süle starts alongside Jerome Boateng at the back. After his midfield role for Germany against France in the same stadium, Joshua Kimmich returns to full-back.

Leon Goretzka and Mats Hummels are not in the squad, but it’s only precautionary.

— GUTEN TAG! Welcome to DW’s live coverage of Matchday 3 in the Bundesliga! —
The Bundesliga returned after the international break as Borussia Dortmund beat Eintracht Frankfurt 3-1, new loan signing Paco Alcacer starring for the Black and Yellows. Today, Bayern Munich, Bayer Leverkusen and RB Leipzig are all action, while Gladbach welcome Schalke later on.