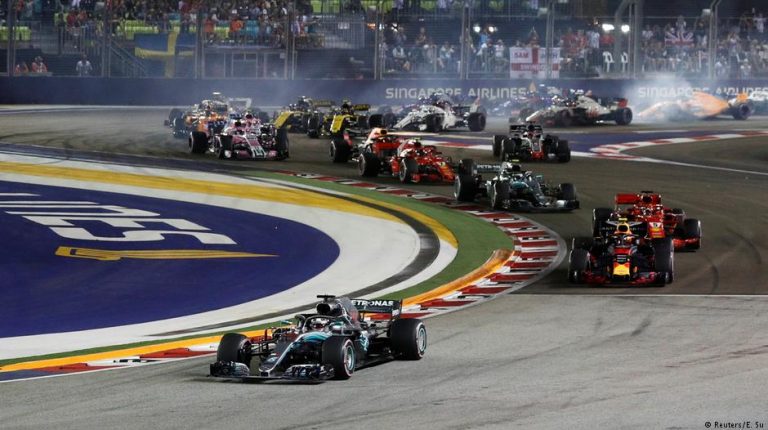 Hamilton, who secured pole with a stunning lap on Saturday, was cool in the face of a late surge by Verstappen’s Red Bull, clinching his fourth win at the Singapore night race to move 40 points of his title rival Sebastian Vettel, who endured a frustrating race and was only able to finish third.

Ferrari’s decision to pit Vettel on the 15th lap and put him on the ultrasoft tyres was a tactical call that backfired, and left him unable to drag himself into contention, despite having started second on the grid.

With six races to go, Hamilton is now the red-hot favorite to add to his tally of titles, but he described the race in Singapore, where the humidity was pushing 70 percent, as the “longest of my life”.

“I’m spent! That was a tough race, I have such great support here and we had a great start. The team had never given up faith and belief in me and Valtteri [Bottas]. That was the longest race in my life and it’s a blessing.

“I was a little but unlucky with the traffic, these guys [Grosjean and Sirotkin] were moving and it was difficult to follow. Max was lucky I think, and the guys wouldn’t let me by, my heart was in my mouth but once I got past I could put the pedal down and just had to go.

He added: “The Ferraris put a good fight this weekend but I’m not sure where their pace went in the race.

The next race in the calendar is Sochi on September 30, and victory for Hamilton in Russia would move him even closer to that fifth title.

LEWIS HAMILTON WINS THE SINGAPORE GRAND PRIX! It’s a fine drive by Lewis Hamilton, who keeps his cool to fend off Max Verstappen and extend his championship lead with only six races to go.

Lap 60/61 Hamilton starts his final lap and is about to go 40 points clear of Vettel in the championship.

Lap 59/61 Ricciardo, despite his fast pace and Raikkonen’s brake problems, has been unable to get past the Finn. It looks like it will be sixth for the Australian.

Lap 57/61 Hamilton is now six seconds clear and it seems nothing will get in his way of victory. Vettel, meanwhile, is way off the pace.

Lap 55/61 Back at the front, it’s a straight battle between Hamilton and Verstappen. The Red Bull has little to lose — he may as well risk it all and attack the Mercedes. But Hamilton is just doing his thing and will win as long as he makes no big mistakes.

Lap 53/61 More positive news for Ricciardo as the man in front of him, Kimi Raikkonen, is told to “ignore the brake light for the moment”. If Ricciardo can get past Raikkonen soon, he can have a pop at Bottas for fourth.

Lap 51/61 Ten laps to go and Ricciardo is the man to keep an eye on. The Australian is on the freshest tyres in the top six and has just recorded the fastest lap of the race, eclipsing Alonso.

Lap 49/61 Can Verstappen reach Hamilton? He’s shaved about half a second off the Briton’s lead.

Lap 47/61 Sirotkin is in the thick of the drama in Singapore. He clashes with Brendon Hartley, who tried to overtake him, and the Russian is hit with a five second penalty, which he serves. He then emerges, at last, behind Perez.

Lap 45/61 He may be seventh, but Fernando Alonso has just clocked the fastest lap of the race.

Lap 43/61 At the front, Hamilton leads Verstappen by 3.6 seconds, with the Dutchman still comfortably clear of Vettel.

Lap 41/61 Perez is given a drive-through penalty for his conflict with Sirotkin. The Force India driver has just fulfilled and comes out at the back of the field.

Lap 39/61 Verstappen is close to Hamilton after the Brit got bottled up in traffic. The Red Bull is making eyes for the lead!

Lap 37/61 Hamilton is not happy with his tyres. He thinks they’re too cold and not effective enough. Mercedes calmly tell him to get on with it.

Lap 35/61 It seems as though Perez has some damage to his car, but it seems like it’s just floor damage. So he will get that patched up and return to the race. Hulkenberg benefited from that crash and has darted into 12th.

Lap 34/61 Drama! Sergio Perez tries to get past Sergey Sirotkin, and looks as if he’s finally done it – but the Russian fights back, and they go wheel to wheel! There’ s a bang as they collide, and Perez has some damage.

Lap 33/61 Williams to Sergey Sirotkin: “Perez is starting to come under attack from behind. Keep doing what you’re doing. You’re doing a great job.”

Lap 31/61 Force India have not been much of a force today. First Perez shunts his teammate Ocon out on the opening lap and now Perez is moaning down the radio about some traffic. “This is a joke, really,” Perez says, fuming at Sirotkin in front of him.

Lap 29/61 Almost halfway through and here’s how things stand: Hamilton leads Verstappen by five seconds, with Vettel languishing in third. Bottas is fourth, with his Finnish compatriot, Räikkönen, fifth.

Lap 27/61 Ricciardo finally pits. It’s a pacey stop — just 2.3 seconds — but he rejoins in sixth ahead of Fernando Alonso. Hamilton has clear track in front of him for the first time in a while.

Lap 25/61 It has started to drizzle in Singapore, which could make things interesting.

Lap 23/61 Raikkonen pits to leave Ricciardo out in front, by virtue of the fact that he is yet to pit.

Lap 21/61 Red Bull tell Verstappen that Vettel believes his tyres will not last. “You know what to do,” is the message.

Lap 19/61 Raikkonen is the new race leader and RIcciardo is three seconds behind him — but neithe have pitted. Hamilton is in third, Verstappen in fourth and Vettel fifth. For now.

Lap 17/61 Verstappen follows him in, and moves from the super soft to soft tyres. He emerges from the pit lane just ahead of Vettel.

Lap 12/61 “The car is really good,” says Verstappen. “Really good.” Just in case he gets too excited, Red Bull reminds him of “the plan” and that it’s “a long race”.

Lap 9/61 Some words of caution from the Red Bull radio to Verstappen. “OK Max, you know what to do on the tyres.”

Lap 8/61 At the front, Hamilton is in control. Just behind him Verstappen is sticking very close to Vettel, who is being pressured by the Red Bull driver.

Lap 7/61 Perez will not receive a time punishment for his role in Ocon#s frash, which seems quite generous.

Lap 6/61 Ocon talks to Sky Sports about the incident that saw his race end early. “I think everyone saw what happened,” Ocon tells the reporter. “I’m not going to comment yet. I want to see the images. So we’ll see.”

Lap 4/61 The safety car has made way and we’re back racing. Quite a lengthy stop as the significant amount of debris was cleared from the track.

Lap 2/61 Ocon walks away but his car is ruined. The complete front-right suspension is gone. It was his teammate Perez who made contact with Ocon!

Lap 1/61 GO GO GO! We’re underway in Singapore! A somewhat chaotic start but Hamilton is clear at the front. Sparks flying out the back of Vettel and Verstappen’s cars as Vettel overtakes the Dutchman with a really neat move to take second place! But the safety car is out after Esteban Ocon smashes into a wall.

14.05 We’re five minutes away from lights out. The warm-up lap is just about ready to get underway.

14.00 Lewis Hamilton, the favorite to win today’s race, secured pole position with what has been described as an “epic” final lap on Saturday. Click this link for more on that.

13.55 It’s 29 degrees in Singapore just ahead of this night race, and how the drivers can deal with that heat and humidity, which is almost at 70%, will prove one of the biggest challenges.