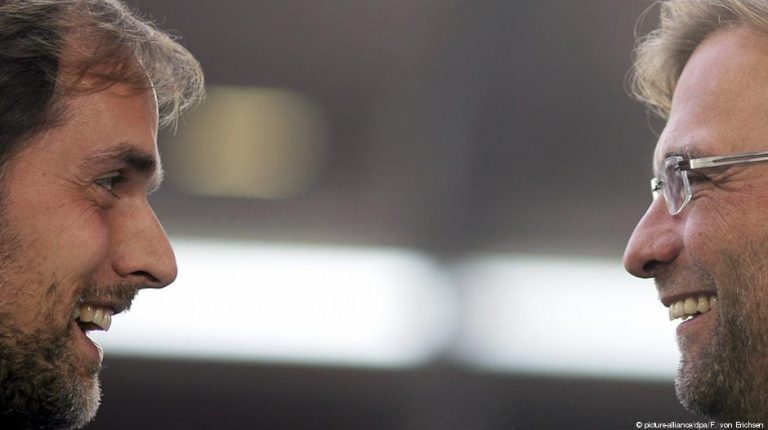 Bundesliga exports Jürgen Klopp and Thomas Tuchel are set to clash on the sidelines on the opening matchday of the Champions League as Liverpool host PSG. Borussia Dortmund are in Bruges and Schalke host Porto.Liverpool vs. Paris Saint-Germain (Tuesday, 9:00 p.m. CEST)

Two wannabe European heavyweights are set to clash on Tuesday night, driven on from the sidelines by two equally ambitious German coaches.

In Liverpool’s red, the zealous, at times overbearing Jürgen Klopp, whose animated histrionics have made him a near God-like figure among his clubs’ fans and a beloved personality among neutrals across the world.

In Paris Saint-Germain’s blue, the equally intense and passionate Thomas Tuchel, who nevertheless has a different reputation among players, fans, and management alike, due to his abrasive, less personable approach.

Both coaches and their clubs have similar ambitions in Europe this season, making this opening clash a perfect curtain-raiser for this season’s Champions League.

Liverpool already have a storied history in the Champions League, but are looking to return to past glories under Klopp and prove that last season’s appearance in the final was no fluke.

PSG, on the other hand, are still looking for their first Champions League title, and have now turned to Tuchel after failing to fire despite an aggressive transfer policy.

Liverpool’s spending has also skyrocketed in the last two years, though each club’s approach has been as different as their two coach’s personas.

Klopp’s splurges on Naby Keita, Alisson, and Virgil van Dijk have bolstered Liverpool’s spine and highlights the 51-year-old’s meticulous and calculated transfer strategy in a bid to fulfill his ambitious tactical project.

PSG, however, have preferred a more scattergun, but nevertheless exciting, approach with the extravagant purchases of Neymar and Kylian Mbappe in the past year, seemingly ignoring any club policy to develop a certain tactical approach.

Those signings were made pre-Tuchel, and the 45-year-old has already butted heads with PSG management, questioning the club’s transfer dealings after it failed to sign a No.6 in the summer.

It highlights a glaring question hanging over Tuchel’s first season in the French capita: How will management and players deal with Tuchel’s intense, in-your-face attitude? They have signed a tactically astute coach who’s vision matches their ambitions, but will he be given enough control to finally end PSG’s wait for European success?

For Klopp, after three years, significant investment and unwavering support, the pressure is on to finally deliver a trophy after three consecutive losses in cup finals. His project may well hinge of how Liverpool juggle what they hope will be a title challenge in the Premier League and whether they can emulate last season’s amazing Champions League campaign.

“We play in the Champions League and the Premier League, the two toughest competitions in world football,” he said.

“But we want it like that. There’s not one second that it’s easy. All I can say is we will do our best to be as good as possible.”

Tuchel and Klopp have both started the season with six straight victories and sit atop their respective leagues, ensuring both teams are in full-throttle mode heading into this heavweight clash.

The pressure for both coaches to continue their fine form will add an extra element to a tactical battle that will already have fans licking their lips.

Victory for either side will send a strong message to the rest of the tournament’s contenders and the matchup promises to be the ideal curtain-raiser for this season’s Champions League campaign.

Last season, Borussia Dortmund went into their first Champions League match on the back of a four-game unbeaten run. But their season soon unravelled under Peter Bosz as they crashed out of Europe’s premier competition and fell out of contention in the Bundesliga by the turn of the year.

Under Lucien Favre, Dortmund look more balanced and more likely to build on an equally solid start to the season. But they need to extend their current unbeaten run into the Champions League on Tuesday to banish last season’s disastrous European adventure.

Anything less than three points against Club Brugge will be unacceptable, especially considering they are the easiest opponents in a tricky group, which also includes Monaco and Atletico Madrid. It’s a task they will have to tackle without the service of new signings Thomas Delaney and Paco Alcacer due to injuries.

If Germany is to remain a force in European competition (beyond Bayern Munich), it will require a strong campaign from Dortmund. Favre has been promised time to create a new, successful era at Dortmund, but a strong showing in Europe would only help fastrack those plans.

Going into the new Bundesliga season, Schalke were expected to continue their rise under second-year coach Domenico Tedesco. Three opening league losses, however, have left the club in a rut.

With Bayern Munich to come this weekend, their Champions League showdown with Porto will be a welcome distraction. In a group also featuring Galatasaray and Lokomotiv Moscow, Domenico Tedesco should be confident he can navigate a path to the knockout rounds. It will be intriguing to see how the 33-year-old performs in his first season in Europe.

A loss in the opening match, however, could derail any ambitions before they have a chance to grow, as well as create even more unwanted pressure back in the Bundesliga. This fixture is not only vital for Schalke’s European hopes, but could also prove crucial in determining how they recover domestically.