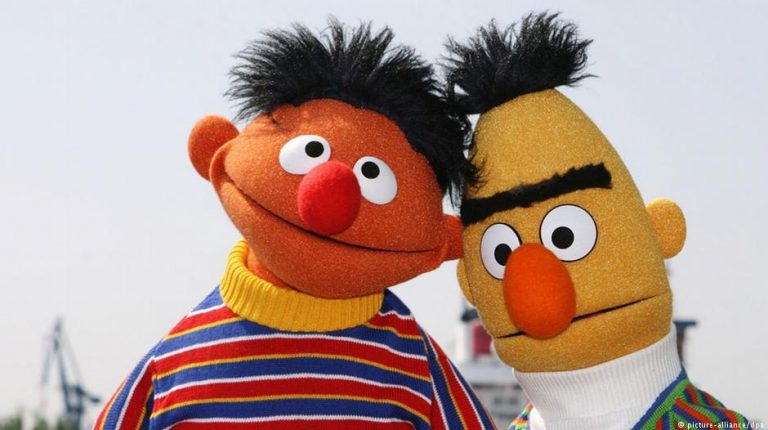 A former “Sesame Street” writer said in an interview that he had always visualized the puppets as a “loving couple,” but the production company insists the puppets are nothing more than “best friends.”It has been speculated for years that Bert and Ernie — the famous male puppets from the children’s TV program Sesame Street — might be more than just roommates.

Mark Saltzman, a staff writer on the program between 1981 and 1990, revived the debate through an interview with web magazine Queerty published on Sunday, in which he said that he had based the pair’s dynamic on his own long-term relationship with the late film editor Arnold Glassman.

“I remember one time that a column from The San Francisco Chronicle, a preschooler in the city turned to mom and asked, ‘are Bert and Ernie lovers?’ And that, coming from a preschooler was fun,” Saltzman said. “I always felt that without a huge agenda, when I was writing Bert and Ernie, they were. I didn’t have any other way to contextualize them.”

“I don’t think I’d know how else to write them, but as a loving couple,” he added.

The show’s production company, however, denied Saltzman’s comments on Tuesday.

“As we have always said, Bert and Ernie are best friends,” Sesame Workshop said in a statement posted on Twitter. “Even though they are identified as male characters and possess many human traits, they remain puppets, and do not have a sexual orientation.”

After Sesame Street’s latest official statement, Saltzman also seemed to backtrack, saying in an interview with The New York Times that his comments had been misinterpreted.

He explained that he and his partner of 20 years had simply served as an inspiration for the Bert and Ernie characters. “As a writer, you just bring what you know into your work,” he told the paper.

“Somehow, in the uproar, that turned into Bert and Ernie being gay,” he added. “There is a difference.”

Over the years, Sesame Street producers have repeatedly denied that the pair’s relationship was anything more than platonic. Nevertheless, Bert and Ernie have long served as a representation of a gay couple in pop culture, with allusions to their sexual orientation occuring in shows such as Saturday Night Live, Friends, Family Guy and The Simpsons.

Shortly after the US Supreme Court legalized gay marriage across the United States in 2013, the pair appeared on the cover of The New Yorker cuddling on the couch watching a television that showed the Supreme Court judges.