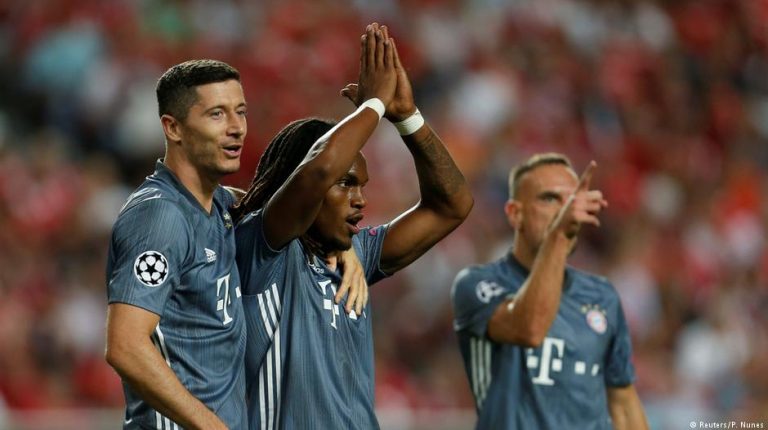 Renato Sanches put the finishing touches on a brilliant team move to complete a comfortable 2-0 win for Bayern Munich against his old club Benfica. A more familiar source, Robert Lewandowski, had given Bayern the lead.Benfica 0-2 Bayern Munich
(Lewandowski 10′, Sanches 54′)

It may have been somewhat forced upon him, but Niko Kovac’s decision to hand Renato Sanches a first Bayern Munich start since a meaningless end of season clash in May 2017 may be one that will benefit coach and player for some time.

The Portuguese midfielder comfirmed a straightforward victory for Bayern by finishing off a magnificent counterattack at the ground where he first shot to prominence.

The gulf in class between the two sides was apparent as soon as Robert Lewandowski bought himself a yard inside the box and cut a finish back across the keeper early on. It was a difficult finish executed with Lewandowski’s routine brilliance and came after some smart work from Sanches, Franck Ribery and David Alaba, whose cutback was the final ball.

The hosts missed their prolific striker Jonas, with former Frankfurt forward Haris Seferovic offering little threat, though both Mats Hummels and Jerome Boateng manufactured some drama with some sloppy passing.

If the opener was well worked, Bayern’s second was something of a masterpiece. Joshua Kimmich looked in trouble near his own corner flag but somehow dug a pass out. The ball was worked to Sanches, who strode through the center of the Stadium of Light pitch as he did so often in his breakthrough season in Lisbon in 2015-16. He then shifted it on to Lewandowski, then James took over. Sanches lurked in the box in Lewandowski’s position and was first to the Colombian’s cross to sidefoot home.

The 21-year-old was applauded by both the home and away fans and the goal felt cathartic for a player who has struggled so much since a stunning Euro 2016.

With the injuries continuing to pile up for Bayern, Sanches may become a more regular name on the Bayern teamsheet. On the evidence of Wednesday, Kovac won’t be too troubled by that.

FULL TIME: Robben’s final effort is saved and that’s the end of that. All pretty straightforward for Bayern. There’ll be a match report in this spot any minute now.

90+1 – Bayern clear a pair of Benfica corners and there’s another two minutes to play.

87′ – Gabriel the latest to take a pop for Benfica after a bit of penalty box pinball. But it’s dragged wide. Müller is ready on the sidelines…

83′ – There’s a roar from the crowd as Silva bombs in to space down the right. His cross is floated and Zivkovic gets there but can’t get enough power on it to trouble Neuer. It doesn’t feel like it’s happening for Benfica.

79′ – James, a former Porto player, is booed and whistled off. He’s replaced by Goretzka.

76′ – A change for Benfica, who withdraw Fernandes in favor of Zivkovic.

74′ – That goal already seems to have done Sanches a great deal of good. He’s finding pockets of space in the center and demanding the ball. Good to see, it’s been a tough couple of years for him.

71′ – Sloppy from Boateng, whose pass is easily cut out 30 meters from goal. Fernandes attempts a shot on the spin but it’s a yard over the bar.

69′ – This is all so easy for Bayern, who are stroking it around under no serious pressure. They almost make it three as Gnabry turns in Alaba’s cross but he’s marginally offside.

65′ – A shoddy free kick from Benfica sets Kimmich and Robben away down the right. After a smart dummy from Sanches, Robben shovels it to Gnabry, whose shot is deflected just wide. Gnabry has just come on for Ribery.

60′ – Neuer is called in to serious action now. First he’s forced to tip over a powerful Dias header from a right wing free kick, then Almeida gets a free header from the resulting corner but sticks it straight in to the German’s chest. Sloppy marking from Bayern from the corner there.

58′ – Seferovic, who has cut an isolated figure tonight, takes a snapshot on the turn, but it’s well wide of Neuer’s goal.

54′ – A lovely moment, and an even better goal. This is genuinely exceptional stuff from Bayern. Kimmich looks in trouble but manages to find a pass under pressure by his own corner flag. The ball is worked to Sanches who makes great ground before finding Lewandowski. He feeds it to James, who scoops in a left-wing cross for the Portuguese midfielder to sidefoot home. What a return for Sanches, and what a decision by Kovac.

52′ – Sanches has a pop from miles out but it flies harmlessly over. The home fans seem to be applauding their youth product though. Hummels then becomes the second Bayern player to see yellow after trying to nip in to intercept a forward pass. Again, that looked soft.

50′ – Hummels charges downfield to try and link with Lewandowski and Bayern, very briefly, look like they might be on troubl on the counter. But Salvio only has Seferovic in support and over-runs it.

48′ – Lewandowski is down holding his ankle after he was caught from behind by Dias while trying to bring down a clearance. But the Polish striker seems ok.

46′ – Benfica get us back underway by walloping the ball straight out of play. That doesn’t bode well.

HALF TIME: The whistle blows, and Bayern can be pretty satisfied with that. Lewandowski’s seventh of the season gave them an early lead before they passed up some decent chances to make it two. The hosts have looked a bit more assured in the last 15 minutes or so but it’s all relatively comfortable.

The big news from elsewhere is that Manchester City are two down at home to Lyon and Cristiano Ronaldo has been sent off on his Champions League debut for Juventus, seemingly for pushing his hand in an opponent’s face. Juve then took the lead against Valencia seconds before the break.

43′ – Sanches, who has faded a little already, is robbed and Benfica counter. It ends with Cervi throwing himself to ground in the box under pressure from Kimmich. There was contact but it wasn’t a foul.

40′ – The old guard almost combine for the second. Yet again, Ribery drives infield with the ball and then slips in his partner in crime. But he’s made the mistake of finding Robben’s right foot and the ball flies over.

38′ – The heat has come out of this one a little as Lewandowski tries and fails to find space for himself in the box.

35′ – Bayern re-assert some authority with a spell of possession, but not much comes from it. Big news from elsewhere though…

32′ – This is much better from Benfica, as Jardel almost gets on the end of a whipped cross from the right. It’s become a bit more of a contets in the last 10 minutes.

28′ – Benfica have recovered their composure somewhat after Bayern had them in real trouble and the Portuguese manage to string a few passes together. Salvio is the man to take the shot again – this time it’s on target but Neuer deals with it, a very good save that.

23′ – Fejsa joins Kimmich in the book after a blatant handball.

21′ – Half chances at both ends here, as James nearly gets on to Alaba’s cute chip from the byline before Salvio blasts over after a shocking clearance from Hummels.

16′ – The hosts are on the ropes a bit here, their passing has been very poor. Ribery is the latest beneficiary and drives in from the left before driving at the goal. It’s a comfortable save for Odisseas.

13′ – A big chance for Bayern to make it two. Kimmich spies Robben making a perfectly-timed run between center and fullback and picks him out with a 40 yard ball. The Dutchman is in acres but delays the finish a beat too long, allowing Odisseas to make a save.

10′ – Lovely team goal, typical dead-eyed finish. Sanches started it all, striding through the center before feeding Ribery. The Frenchman drove in from the left and waited to find the flick to Alaba. He then cut back for Lewandowski who touch a touch while opening his body and fired it low back across the keeper.

7′ – Grimaldo tries to slip one in for Seferovic but it’s behind the Swiss striker and Robben clears up.

3′ – Sanches gets on the ball for the first time. He bursts through the midfield like it’s 2016 and finds Ribery. Bayern eventually work it to the other side and Robben buys a corner.

1′ – And we’re off. Bayern Munich are in grey, which is a little unsettling.

20:55 – The ceremonial hand shaking follows the famous anthem and we’re almost ready to go. Just time to read about Hoffenheim’s Champions League debut before we begin.

20:50 – In the absence of their main goalscoring threat, Benfica opt for Haris Seferovic up top. The Swiss forward will be familiar to Bundesliga fans and Bayern after his three year spell at Frankfurt. He made scored just 16 in 86 league appearances for the Eagles which is some dip form Jonas’ 99 in 110 for Benfica.

20:45 – Hello, and thanks for joining us at the beginning of Bayern Munich’s annual quest for their Holy Grail. Four semifinals and a quarterfinal in the last five years would be a pretty respectable return for most clubs but things are different at the Allianz Arena. Niko Kovac is the latest man Bayern have turned to as they try to win this competition for the first time since that all-German final of 2013.

With Corentin Tolisso joining the likes of Kingsley Coman, Thiago and Rafinha on the treatment table and Leon Goretzka not fully fit after pulling out of training on Monday, Renato Sanches is handed a first Bayern start since May 2017. The Portuguese midfielder made his name at the Stadium of Light but has lost his way after dazzling for his country at Euro 2016.

James Rodriguez is also handed a first start under Kovac but Thomas Müller is on the bench so must wait to become the 35th player to reach 100 Champions League appearances. Here’s how the sides line up.