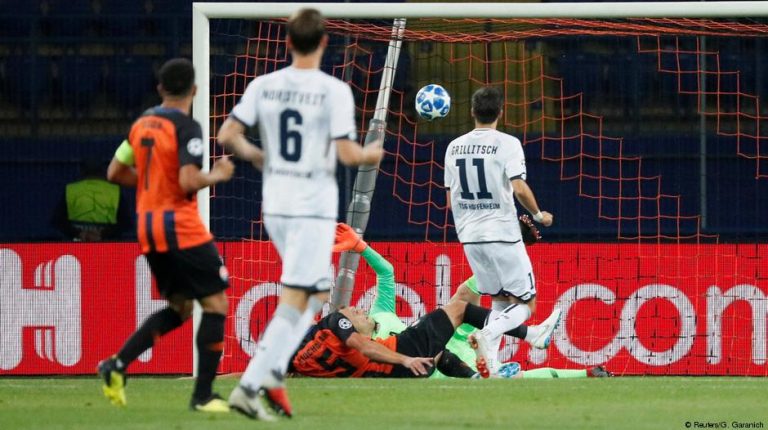 Hoffenheim’s Champions League debut started in thrilling fashion before fading. At a time when German teams other than Bayern Munich have struggled in Europe, Julian Nagelsmann’s side looked more than at home.Shakhtar Donetsk 2-2 Hoffenheim
(Ismaily 27′, Maycon 81′ – Grillitsch 6′, Nordtveit 38′)

Julian Nagelsmann, dressed smartly in a shirt, tie and waistcoat, saw his side deliver a disciplined and structured performance in a thrilling game in the Metalist Stadium, Kharkiv, but it only proved enough to share the points after a late equalizer.

After selecting three strikers, Nagelsmann was quickly rewarded. Leonardo Bittencourt’s perfect pass sent the on-rushing Florian Grillitsch into the box and the midfielder finished with a deft chip to score the club’s first ever Champions League goal.

Shakhtar, still with plenty of individual quality, eventually forced their way back into the game. With their pace out wide exposing Hoffenheim’s backline, Ismaily went on a mazy run down the left wing before cutting in to curl the ball into the far corner with the outside of his foot.

But Hoffenheim kept coming back. The impressive Joelinton saw an effort saved and Bittencourt’s bullet diving header after a great cross by Nico Schulz fell straight into the arms of Pyatov. Shortly before the break, Havard Nordtveit made it third time lucky as he headed in from a corner to restore the visitor’s lead.

On the night when Nagelsmann made history by becoming the youngest head coach in Champions League history (31 years and 58 days), his side made it even more of a night to remember with their performance.

Pressing high and pinning Shakhtar, Hoffenheim nearly added a third 10 minutes after the restart as the game’s pace showed no signs of letting up. Nagelsmann’s side had some defending to do too, but their positional discipline and strong tackling kept the visitors at bay.

The only thing left for Shakhtar to do was to shoot from range. Into the final 10 minutes, Maycon did just that from 30 yards out and his unstoppable shot flew into the bottom corner. The goal swung momentum in Shakhtar’s favor but Hoffenheim held on for the point they deserved.