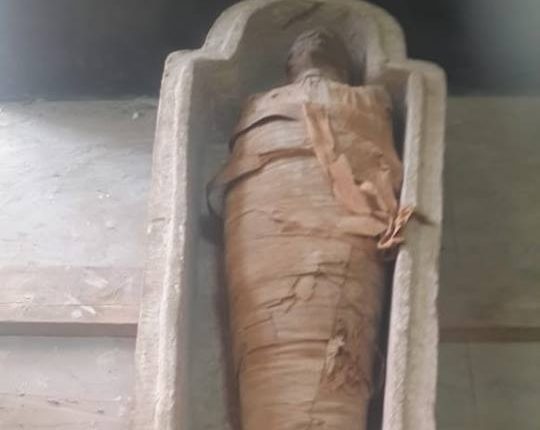 Completing a chain of remarkable discoveries, the ministry of Antiquities announced on Tuesday discovering a late era sandstone coffin with a mummy buried inside of it in Agakhan site at the western bank in Aswan.

The human body was uncovered in a good condition, wrapped in linen. The discovering mission also found near the mummy a pottery coffin with some stone painting, both decorated inscriptions and a hieroglyphic writings.

Mostafa Waziri, the general secretary of the Supreme Council of Antiquities explained in a press release published by the ministry that “the coffin was founded inside an ancient tomb within the three tombs has been uncovered during the archaeological survey that was carried out in the western road, which lead to the Aga Khan Ville and shrine.”

The unearthed mummy was a part of several other discovered mummies that were found buried in a random and unorganised method.

Abdel Monaem, general director of Aswan and Al-Nuba Antiquities said that the mission also unearthed a  head of a sandstone statue without any inscriptions, which was buried in a rectangular chamber.

The mission also found “a collection of amulets made of lanterns and coloured stone, and a small wooden statue of the god Horus, and its walls decorated with colourful religious scenes representing some of the gods, such as Hathor, Isis, and Anubis,” he concluded.