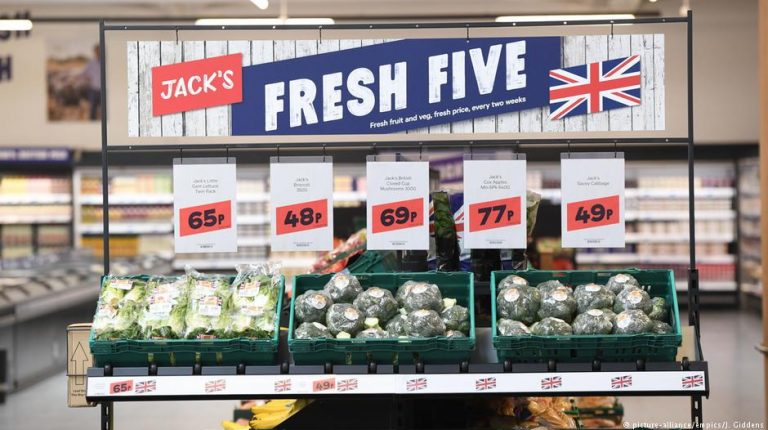 British supermarket giant Tesco has unveiled the first of its new Jack’s discount food stores, saying they would be the cheapest in town. The stores are intended to stop the advance of German-owned Lidl and Aldi.Britain’s biggest retailer Tesco inaugurated its first Jack’s store in Chatteris — a small town 80 miles (128 kilometers) north of London — on Wednesday. A second Jack’s store was opened in Immingham, to be followed by another 13 over the next six months.

The discount brand is named after Jack Cohen, who founded Tesco in 1919, and the launch will coincide with the company’s centenary celebrations.

Tesco chief executive Dave Lewis said Jack’s would sell “great-tasting food at the lowest possible prices,” with eight out of ten products made in Britain. “The intention is for us to be cheapest in town,” he said at the Chatteris store, which was built as a Tesco supermarket, but was mothballed in 2015 when the group was in crisis.

With its new discount food chain Tesco is fighting back against German discounters Lidl and Aldi, who “continue to shape the direction” in the UK retail business, according to data group Euromonitor International.

Together Aldi and Lidl now have a combined 13.1 percent market share in Britain, chipping away at market leader Tesco and its three biggest rivals, Sainsbury’s, Asda and Morrisons.

“Consumer demand for low prices, driven by food price inflation in the wake of the Brexit referendum, as well as real wage stagnation, are part of the reason for this,” the group said in a recent report.

Tesco copies the tactics of the German discounters, whose limited-range stores have won over increasing numbers of British shoppers. At the same time, Jack’s stores attempt to woo budget-conscious shoppers with a patriotic pitch.

Sainsbury’s and Walmart-owned Asda, meanwhile, are trying to improve their fortunes with a planned merger. But the mega deal faces uncertainty after Britain’s competition watchdog said on Wednesday it was launching an in-depth probe into the proposed tie-up.

Jack’s is not the first attempt by Britain’s mainstream grocers to crack the discounter market. Sainsbury’s joined up with Denmark’s Dansk Supermarked in 2014 to bring the Netto discount brand back to Britain, but closed its 16 stores two years later, blaming the difficulty and cost of growing at pace and scale.

Tesco attempted to go down the discount route in the 1980s, with its Victor Value brand, but later ditched the concept. Asda has also experimented.

Andy Brian, head of retail and partner in law firm Gordons, believes though that it won’t be easy to “crack the discount market” even for a brand as big as Tesco.

“Tesco will have to find a way to attract customers from the likes of Aldi, Lidl and Iceland, rather than convert existing Tesco customers into discount shoppers through brand association,” he told the news agency Reuters.

With the new chain, Tesco has to walk a fine line, challenging the discounters while avoiding the cannibalization of its main store brand with lower prices.