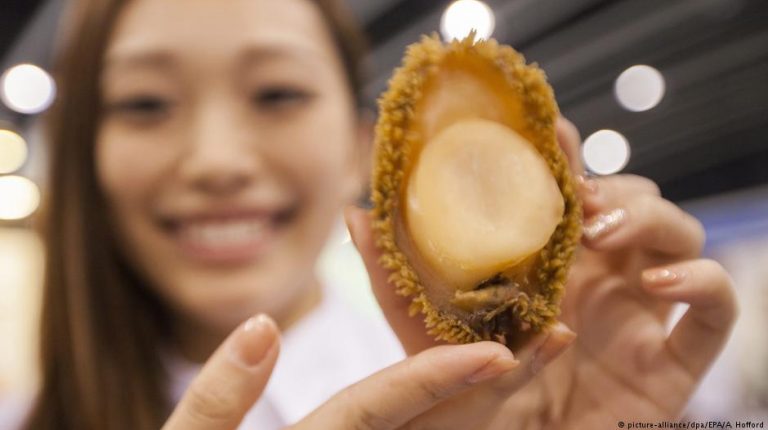 Chinese crime syndicates working with local South African gangs have caused stocks of abalone to be depleted at a record rate. Illegal trade in the marine mollusks extends across sub-Saharan Africa.Demand for abalone in Asia is increasingly being met through illegal harvesting run by criminal gangs threatening the survival of the marine mollusk in South Africa, a report has said.

TRAFFIC, a wildlife trade monitoring network, said Wednesday that 96 million individual abalone worth nearly $900 million (€771 million) have been illegally poached off South Africa’s shores in the past 17 years.

Nearly all of the large sea snails were sent to China and Hong Kong, where it is considered a delicacy. Only around a third of abalone harvested off South Africa’s coast was done legally in line with quotas and other regulations, the report said.

Chinese crime syndicates working with South African gangs have taken advantage of poverty and joblessness in Western Cape Province, in many cases combining the illegal abalone trade with drugs and other high-value wildlife products, the report said.

“Because of the involvement of organized crime, the apparent links to gangs in Cape Town, the links between the trade in abalone and the trade in drugs, there are also some clear negative socioeconomic impacts associated with it,” said Markus Burgener of TRAFFIC in a statement.

The illegal trade extends across sub-Saharan Africa, with 43 percent of illegally harvested abalone coming from non-abalone producing and even landlocked countries exporting to Hong Kong, the report said.

The report warned that continued illegal abalone harvesting could lead to a collapse of stocks, causing long-term repercussions on coastal communities.

Despite risks to abalone numbers, they were removed from the CITES list of at-risk species in 2010. Abalone are important to coastal ecology because they clean water.

TRAFFIC recommended that abalone be listed in CITES appendices to better regulate international trade, especially through non-abalone producing countries that do not regulate the trade.

It also recommended greater international cooperation due to the presence of transnational crime syndicates and local programs to address socioeconomic issues around illegal fishery.