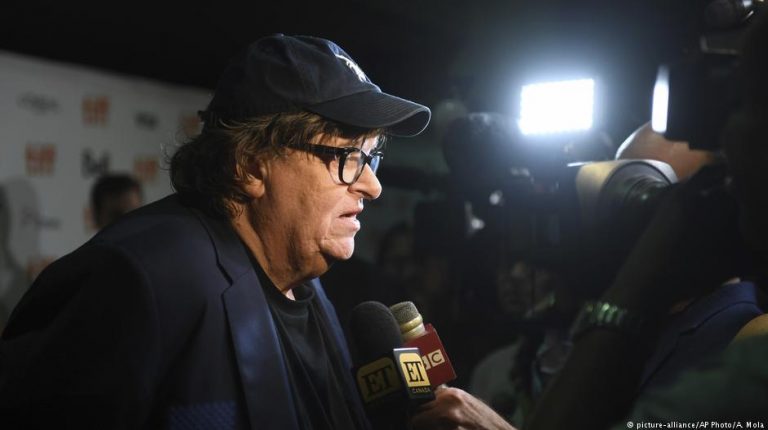 In his new documentary, Oscar winner Michael Moore takes on Donald Trump, the US electoral system and growing social inequality. “Fahrenheit 11/9″ opens this week in cinemas across North America.”Tyrant. Liar. Racist. A Hole in One.”

So reads the provocative slogan on posters for Michael Moore’s latest film, Fahrenheit 11/9. The poster shows a golfer from behind, a man wearing a red baseball cap, his swing aiming for the White House. It’s clear who the image is meant to represent.

This movie is about Donald Trump — but not only him. Fahrenheit 11/9 deals with Trump’s election to the US presidency in 2016 and raises the question of how it could happen despite all polls suggesting otherwise. In his documentary, Moore also takes aim at the entire US political system.

Known for his controversial documentaries, Moore received an Oscar for Bowling for Columbine in 2003, a film about school shootings and the US arms industry.

In 2004 he was awarded the Palme d’Or at Cannes for Fahrenheit 9/11, which strongly criticized former US President George W. Bush’s “war on terror.”

‘Road was paved’ for Trump

The title of his latest, Fahrenheit 11/9, simply flipped the numbers to reference November 9, 2016, the date of Trump’s election victory and the beginning of a seismic shift in US politics.

For Moore, that day was just the culmination of a development long in the making.

“The film is also very much about who we are as Americans because [Trump] didn’t fall out of the sky,” Moore said on the red carpet at the Toronto International Film Festival earlier this month. “He’s been around for a long time and we’ve behaved a certain way for a long time that when you look back now you see how the road was paved for him.”

The US premiere took place on September 10 in Moore’s birthplace of Flint, Michigan. The city and its predominantly black citizens play an important role in the film. In recent years, it was discovered that residents had been supplied with lead-laced drinking water for more than two years due to budget cuts by Republican Governor Rick Snyder.

To save money, drinking water was drawn from a nearby river in 2014 rather than being piped in from Detroit. It was channeled through old pipes into the city, and the contaminated water combined with lead from the pipes resulted in residents becoming seriously ill. At least 10 people died of Legionnaires’ disease, likely caused by the contaminated river water, while others suffered from developmental delays as a consequence of the lead poisoning.

For Moore, the scandal in Flint exemplifies what happens when a government decides that money and power are more important than people. In an interview after the Flint premiere, Moore said the victims must know their deaths weren’t in vain.

Several victims of the drinking water scandal were in the audience at the evening premiere. Their reactions to the film were emotional, as the Detroit Free Press observed. “At one point, when photos of Flint residents who died from Legionnaires’ disease during the water crisis were shown, one person yelled, “We love you all!,” the paper noted.

Ariana Hawk, the mother of a young boy who was a victim of the lead water crisis, told the daily The Detroit News that she hopes the film will bring the national spotlight back to Flint. “There are families here who still can’t drink the water, that are still affected by what the water did to them,” she said. “I know, I’m still living it.”

At the film’s world premiere in Toronto on September 6, Moore appeared onstage with a number of guests, including survivors of the February shooting rampage at Marjory Stoneman Douglas High School in Parkland, Florida.

Fahrenheit 11/9 is in theaters across the US and Canada as of September 21.