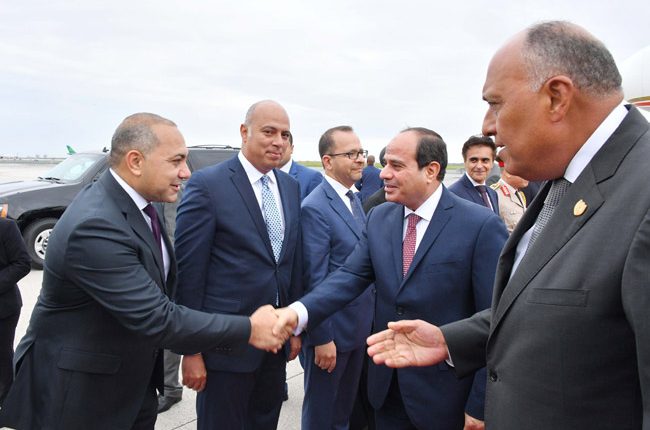 President Abdel Fattah Al-Sisi arrived on Saturday to New York and was received by Minister of Foreign Affairs Sameh Shoukry and other officials, as he will take part in the 73rd round of the United Nations (UN) General Assembly sessions.

Al-Sisi is expected to give a speech, which according to the Egyptian presidency will tackle Egypt’s vision in dealing with international and local problems, and its strategy to keep peace as well its plans in countering terrorism.

The president is expected to meet with different state leaders, politicians, and businesspersons. According to the presidency, Al-Sisi is expected to exhibit Egypt’s latest policies and measures to enhance and encourage investment and development projects.

On 24 September, a day before the start of the General Debate of the 73rd session of the General Assembly, Al-Sisi will also participate in the Nelson Mandela Peace Summit.

This Peace Summit will offer the opportunity for world leaders to renew their commitment to global peace, conflict prevention, conflict resolution, peace building, promotion, and protection of human rights and long-term development initiatives as called for by the Secretary-General. The Peace Summit will also adopt a political declaration, which will reaffirm the values of Nelson Mandela.

The General Assembly is one of the six main organs of the United Nations, the only one in which all Member States have equal representation: one nation, one vote. All 193 Member States of the United Nations are represented in this unique forum to discuss and work together on a wide array of international issues covered by the UN Charter, such as development, peace and security, international law, etc.