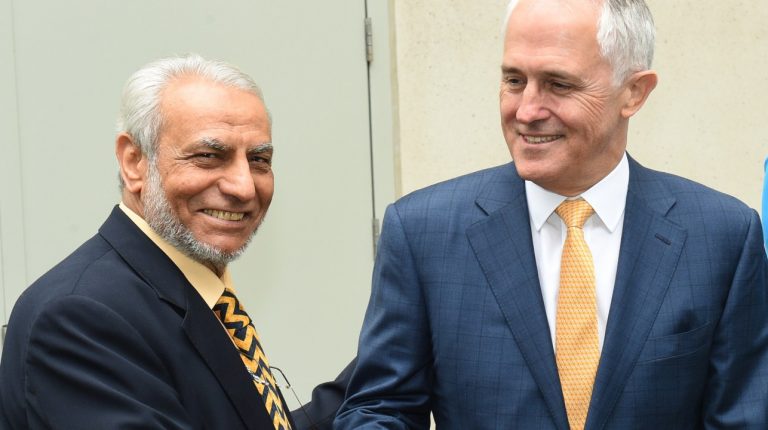 The last appearance of Mostafa Rashed was in the most recent Al-Gouna Film Festival, among actors, and singers and since his sudden appearance in late 2013, a controversy rose around him and his opinions and “fatwas”.

Rashed told reporters during the festival that he “insisted to take part in Al-Gouna festival to deliver a message to terrorists around the world that Islam encourages the objective art and cinema.” He said that he has received messages threatening him of attending the festival.

Meanwhile, he claims that he is a professor of Islamic law at Al-Azhar University and the Imam of Sydney Mosque in Australia, and recently the Grand Mufti of Australia and New Zealand. In February 2016, the Al-Azhar issued a statement denying any relationship between Al-Azhar and Rashed who was described in Al-Azhar’s statement as a liar.

The “alleged imam” is a popular guest in several talk shows and media outlets in Egypt, spreading opinions, such as fasting during the holy month of Ramadan is not an obligation, drinking alcohol is not forbidden, pilgrimage to Sinai is better than pilgrimage to Mecca, and Prophet Muhammad is a Christian.

Daily News Egypt contact the Australian National Imams Council (ANIC) regarding Rashed’s allegations, the council said that Rashed is not member of the council or imam of any mosques in Sydney or any other Australian cities, and no one of the Muslim community in Australia knows him.

According to the council, they had made numerous statements regarding Rashed, including a statement sent to the head of the Egyptian Supreme Media Council Makram Mohamed Ahmed on July 2018, calling upon the Egyptian media not to host the alleged imam as a mufti of Australia, adding that the council will take the needed legal measures against Rashed.

“We’ve contacted numerous media organisations objecting on them promoting Mostafa Rashed as the mufti of Australia but unfortunately they weren’t cooperative,” said the ANIC responding the DNE inquiry.

The Grand Mufti of Australia is Ibrahim Abu Mohammed who was elected after the former Mufti Sheikh Abdel Aziem Al-Afifi died in July this year.

The ANIC is the only central, Islamic body that holds key representation from Australian-based Muslim clerics. The ANIC was established in late 2006 as an umbrella organisation consisting of a council of Imams, representing each Australian state and territory. It gathers more than 200 imams and scholars representing all Islamic schools and races.

Formula One: Hamilton keeps his cool in Singapore to open daylight in title race

Our beautiful planet: Blanketing a town in spider silk