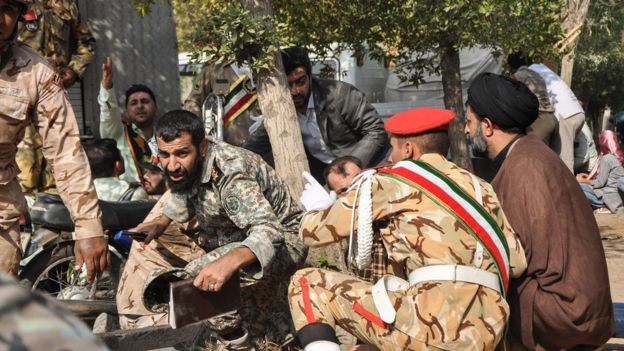 Egypt condemned on Saturday, the attack that targeted a parade of Iranian military units on Saturday morning in Iran’s southern city of Ahwaz, killing 29 and injuring 50 others, according to a statement by Foreign Ministry spokesperson Ahmed Abou Zaid.

The statement described the incident as a terror attack saying that “in line with its firm and consistent positions of condemning all forms of terrorist operations, the Arab Republic of Egypt condemned the terrorist attack that targeted a military parade in Ahvaz, Iran, and for which the terrorist organisation Daesh took responsibility.”

Egypt expressed its sincerest condolences to the families of the victims, and wished the injured a speedy recovery. The statement also renewed Egypt’s call for uniting international efforts to combat the terrorism phenomenon and draining its sources of support.

At least 29 were killed and more than 50 others were wounded in an attack by gunmen during a parade of Iranian military units on Saturday morning in Iran’s southern city of Ahwaz, according to the Iranian state agency IRNA.

Moreover, the Iranian Ministry of Foreign Affairs summoned the Emirati acting ambassador on Sunday regarding the statements by the Emirati official about the Ahwaz attack. Iran accused two Arab Gulf states of supporting the attackers.