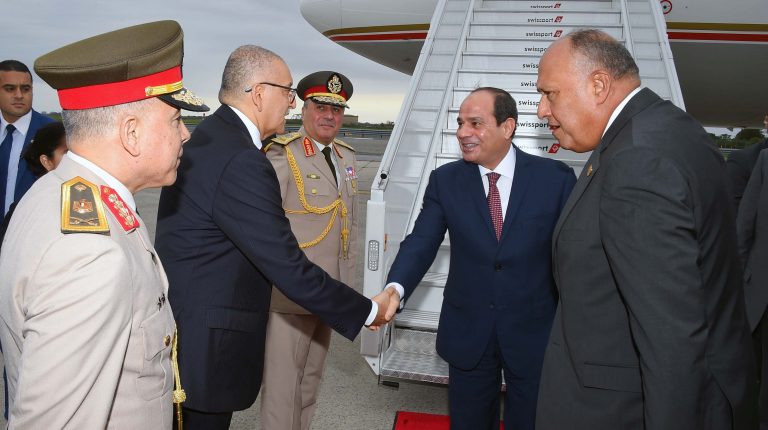 Al-Sisi, who regularly attends the annual UNGA summit, is joining the conference this year with an agenda focused on discussing topics concerning regional security issues.

The president is expected to cover the crises in Syria, Libya, and Yemen, the importance of the United States’ influence in reviving peace talks between Palestine and Israel, along with combating terrorism, Egypt’s Permanent Representative to the UN Mohamed Idris informed state-media last week.

In related news, Egyptian army chief of staff Mohamed Farid participated in a Kuwait meeting of chiefs of staff of the member-states of the Gulf Cooperation Council, (GCC) Egypt and Jordan, along with the US Central Command.

The meeting tackled military partnership and cooperation between participant countries, along with regional and international efforts targeting to combat terrorism, and facing the challenges and threats challenging Middle East security and stability. However, according to Al-Ahram Weekly, the meeting was mainly to address a security plan among Arab allies, which would enable Washington to reduce its intervention in the region.

Prior to that, Egypt hosted the largest joint multinational military drill, also known as ‘Bright Star 2018’, with the participation of Egypt, the US, Saudi Arabia, the United Arab Emirates (UAE), Jordan, Greece, the United Kingdom, Italy and France among other countries.

“Approximately 800 US military service personnel will participate in this exercise for the second year in a row. The focus this year will be on regional security and cooperation, and promoting interoperability in irregular warfare scenarios,” the US Central Command said in a statement on 30 August.

Sisi’s participation in the past four UNGA sessions focused on explaining Egypt’s foreign policy. Through his speeches, the president emphasised terrorism threats, fuelled by religious extremism, which tore apart Arab countries, most notably Syria, and Libya.

“We have all witnessed Libya’s descent along a downward spiral when the forces of extremism announced their presence through actions that contradict the principles of Islam and humanity,” he stated in the 70th session in 2015, adding that Egypt supported the Skhirat Agreement.

Concerning Syria, Sisi said that “extremist groups took advantage of the nation’s aspirations in Syria,” reiterating Egypt’s invitation for Syrian parties to meet in Cairo so as to formulate a plan for the interim period in accordance with Geneva.

Sisi clarified that Egypt’s foreign policy supported nation states, and principles of citizenship and human rights, especially regarding the situations in those two countries.

He had also previously justified intervention in Yemen, based on its request, aimed to preserve Arab national security in the face of attempts by “outside parties’ intervention in its affairs”, highlighting Egypt’s commitment to Yemen’s unity.

The president repeatedly called for an imperative end to the Palestinian-Israeli conflict, by giving the Palestinian people their right to self-determination and an independent state, based on the 1967 borders with East Jerusalem as its capital.

In 2017, Sisi addressed the issue of extremist religious discourse serving ideological pretexts to terrorism, and called on the international community’s moral obligations towards the Rohingya Muslim minority in Myanmar, as well as Egypt’s commitment to cooperating with Sudan and Ethiopia regarding the Renaissance Dam.

Egypt has had a longstanding relationship with the UN, both as a founding member of the UN which has been elected six times to its security council, and is the seventh largest contributor to its peace-keeping operations world-wide.

As a member of the UN Security Council (UNSC) for the past two years, Egypt initiated several resolutions, including some aimed at supporting the Palestinian cause, condemning the recognition of Jerusalem as its capital, vetoed by the US.

The Egyptian Foreign Ministry welcomed in December the adoption by the security council of the draft resolution submitted by Egypt, Sweden, and Japan to extend the effect of Resolution 2165 on the delivery of cross-border humanitarian assistance to Syria.

The UNSC also adopted a resolution to counter terrorist discourse, advanced by Egypt, which also obtained the support of the UNGA regarding a draft resolution, concerning terrorism’s impact on human rights.

Palestinian President Mahmoud Abbas will be attending the session and is expected to deliver his speech on Thursday.

In his last speech before the UNGA in 2017, Abbas focused on stating Israeli violations of international laws and Palestinian rights.

“We recognised the state of Israel on the 1967 borders. But Israel’s continuous refusal to recognise these borders has put into question the mutual recognition we signed in Oslo in 1993,” he stated.

With peace negotiations stalled since 2014, the situation is further complicated by US stances under President Donald Trump’s administration.

The US has recognised Jerusalem as the capital of Israel last December, opened its embassy there, cut funding to the UNRWA, and recently decided to close the Palestinian Liberation Organisation’s offices in Washington.

The moves have sparked hostility with Abbas. This is in addition to continued violence in the Gaza Strip, and failure to reach a permanent ceasefire agreement with Hamas so far.

Israel is concerned about escalation of tensions upon Abbas’ speech to the UNGA, which it expects to be aggressive, especially amid tense relations with the US.

Israeli Defence Forces Chief of Staff Gadi Eizenkot reportedly warned during a cabinet meeting that the chances of a wave of terror in Judea and Samaria are between 60 and 80%, and if such a wave develops, it will be more significant than in Gaza, in terms of the number of forces required to deal with it, and could fuel lone-wolf Palestinian terrorism among the civilian population, media reported.

This came as Asharq Al-Awsat reported Friday that Abbas intends to “give a last warning” in his upcoming speech, to either have an international peace conference with a specified timeframe, or resort to unrecognising Israel, and hence act as a state under its occupation.

Syria continues to be a pressing issue among UN concerns of conflict in Idlib, so is the situation in Yemen.

Meanwhile, an anti-Iran stance remains on the Arab agenda, as does the diplomatic conflict with Qatar. A quartet commission including Saudi Arabia, the UAE, Bahrain and Egypt – the four countries boycotting Qatar – met earlier in September on the sidelines of the 150th Session of the Arab League ministerial council.

They issued a statement in which they continued to blame Iranian interference in the region, citing the production of ballistic missiles targeted at Saudi Arabia, its hostile stance towards Arabs, and its pursuit of a nuclear programme.

“The commission also condemns Iran’s direct threats to international navigation in the gulf and the Strait of Hormuz, as well as navigation in the Red Sea through its agents in the area, including the recent targeting of a Saudi oil tanker by the Houthis in Bab Al-Mandab Strait, in violation of the international law,” the statement read.