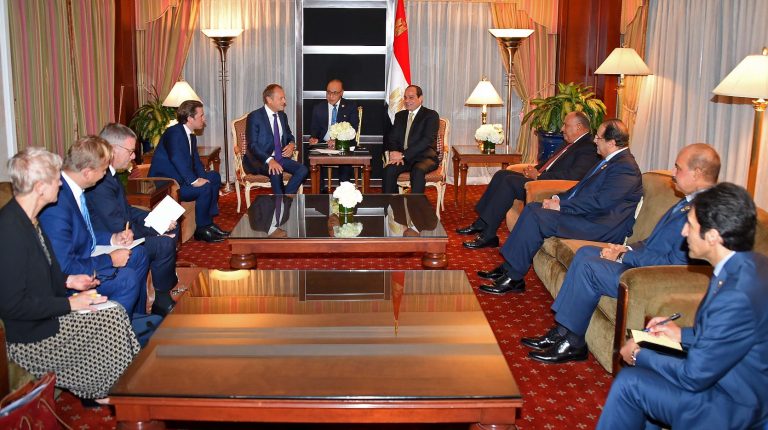 President Abdel Fattah Al-Sisi met on Sunday with European Council President Donald Tusk, and Chancellor of Austria Sebastian Kurz, on the side-lines of their participation in the 73rd round of the UN General Assembly in New York.

During the meeting, Al-Sisi expressed Egypt’s eagerness to boost cooperation with the European Union (EU) to achieve the mutual interests of both sides, and confront the challenges that the Mediterranean region is facing, according to a statement from the presidency spokesperson Bassam Rady.

The meeting reviewed Egypt’s achievements in countering illegal migration into Europe. They also discussed the idea of holding a summit between the EU and the Arab League. The president and the two European politicians agreed on the necessity of reaching political settlements for the current crises in the Middle East in a manner which preserves national institutions and safeguards their unity.

A week ago, Al-Sisi met Kurz and Tusk during their short visit to Egypt to discuss cooperation between the EU and Egypt on several issues including combating illegal migration.

Moreover, Al-Sisi met with the president of the World Bank (WB) Jim Yong Kim in presence of ministers of investment and international cooperation, Sahar Nasr, Trade and Industry Amr Nassar, and the Minister of Foreign Affairs Sameh Shoukry, in addition to Abbas Kamel, chief of Egypt’s General Intelligence Service.

Kim stressed that the WB will continue to support Egypt’s successful economic reform programme, which achieved positive results, including raising the level of economic growth, decreasing the budget deficit, achieving economic stability, enhancing the business and investment climate, directing the outcome of lifting subsidies to the service sector, and establishing development projects, which enabled Egypt to become increasingly successful, according to Rady’s statement.

For his part, Al-Sisi stressed Egypt’s enthusiasm to enhance relations with the WB, as it is one of the most important partners for development in Egypt, and the first international institution to fund Egypt in implementing its economic reform programme.