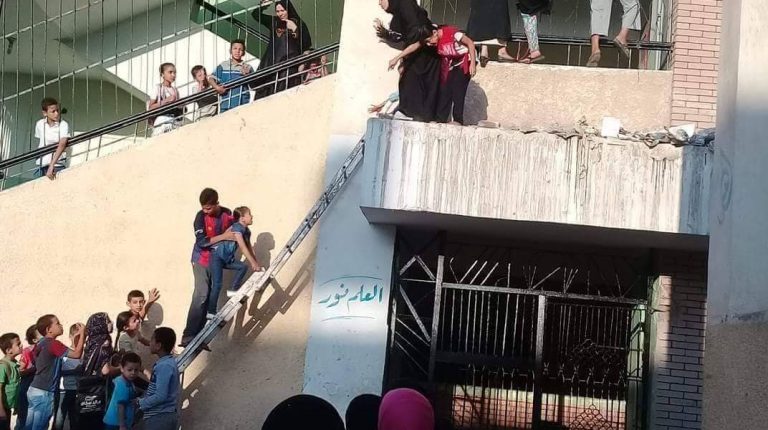 As the new school year kicked off on Sunday, several unpleasant incidents took place in different schools in Egypt’s governorates, including the death of a student.

Ibrahim Hasan, 9, was crushed to death by a stampede of school students who were trying to book the first bench in a village in the Dakahlia governorate.

Hassan went into hypotensive shock, and died instantly. The school director delivered the student’s body to a health unit and left, according to media reports.

Meanwhile, photos circulated on social media featuring parents stumbling hurriedly to reach the first benches towards their children, a scene which frequently occurs each year in public schools.

The photos also showed mothers breaking into schools and climbing wooden ladders to enter into classes faster. The school administration called the police to deal with the incident.

Concurrently, clashes erupted between parents in a school in Minya over who will sit in the first bench, leading to injuries among a number of them.

Earlier this month, the Ministry of Education increased the density of the experimental public schools to become 50 students in each class.

In a separate incident, students were beyond shocked when they saw a snake in the school laboratory in Sohag.

Similarly, a school director in Minya was referred to an investigation over the poor hygiene of the school.

Meanwhile in Port Said, a student has been suspended after he slapped his female teacher.

Moreover, a school director in El-Mahalla El-Kubra, Gharbia, brought a barber to the school premises, in order to cut the students’ long hair, emphasising that he will never accept what he described as an ‘inappropriate’ look during the school year. He also prevented students from wearing ripped pants and necklaces so as to “maintain moral standards.”

Topics: Back to school