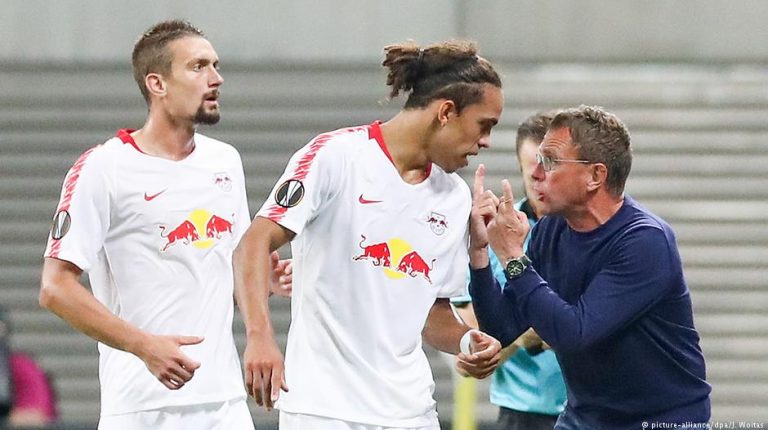 Already 12 games into their 2018/19 campaign, Leipzig are struggling to find their feet in arguably their toughest season to date. The midweek visit of Stuttgart offers the Saxony side a chance to get back on track.Since the club’s inception in 2009, RB Leipzig have made no bones about their desire not just to reach the European stage, but to establish themselves amongst Europe’s elite in the long-term.

Now in their second season of juggling three competitions, performances of late suggest Ralf Rangnick and Co. still have a lot to learn, with ill-discipline proving costly both on and off the pitch.

Any optimism following the 3-2 win over Hannover was snuffed out after a humiliating defeat against Salzburg, which Rangnick claimed had seen Leipzig take “at least one-and-a-half, if not two steps backwards”.

Players have received public critiques far removed from the media-trained platitudes of most post-match press conferences, while Nordi Mukiele and Jean-Kevin Augustin were suspended from first-team affairs for Sunday’s trip to Frankfurt after breaching the club’s behavioral code.

“We’ve got clear rules in the group. The decision was right and consistent,” captain Willi Orban said before finding the positives in the 1-1 draw. “The game against Frankfurt was a test of our character following Thursday’s non-performance. Of course, we’d have liked three points, but it’s nice to have taken a step forward. With a bit of luck we’d have won. But we’ve got to learn, learn, and learn.”

Now 12 Bundesliga games without a clean sheet and leading the league with five goals conceded before half-time, Leipzig desperately need to break bad habits. With Rangnick struggling to find the balance between disciplinarian and motivator, facing an out-of-sorts Stuttgart side may provide the perfect tonic.

Korkut’s magic has worn off in Stuttgart

The Swabian side are a shadow of the team that took the Bundesliga by storm at the start of the year. Only title winners Bayern picked up more points than Tayfun Korkut’s charges in the second half of last season.

However, the magic touch seems to have worn off over the summer with Stuttgart second from bottom and without a win to their name. “We’ll get our chances on Wednesday,” said Korkut. “We want to take the next step and pick up our first win of the season.”

Improvements will need to be made at both ends of the pitch if that’s to happen. Stuttgart have failed to score in four of five games in all competitions this season, whilst at the back, no Bundesliga side has conceded more goalscoring chances.

“Not everything is perfect just yet,” continued Korkut. “It’s about enjoying longer periods of positive play out on the pitch. We’ve got to present a compact and united front in Leipzig and close the channels. A lot will be thrown at us.

Elsewhere in the Bundesliga

Not many pundits would have backed Werder Bremen and Hertha Berlin’s clash on Matchday 5 to be a top-four tussle, but the two early-season surprise packages will lock horns on Tuesday separated by just two points near the summit. Hertha currently sit in second, but haven’t won in Bremen since 2006, so the game will be anything but a foregone conclusion.
Robert Lewandowski has scored 18 goals in 13 games against Augsburg – including 10 in his last five meeting with Die Fuggerstädter – but may be rested with Sandro Wagner waiting in the wings to make his first start of the season.
The last time Nuremberg picked up a win in Dortmund, Horst Köppel and Arie Haan were in charge of the respective sides back in 1990! In the 15 games since, Der Club have picked up just three points, whilst failing to score in their last seven trips to the Signal Iduna Park. Having had to rely on Christian Pulisic’s heroics in their two most recent outings, BVB will be hoping to have an easier time of it on home soil against the newly-promoted side.