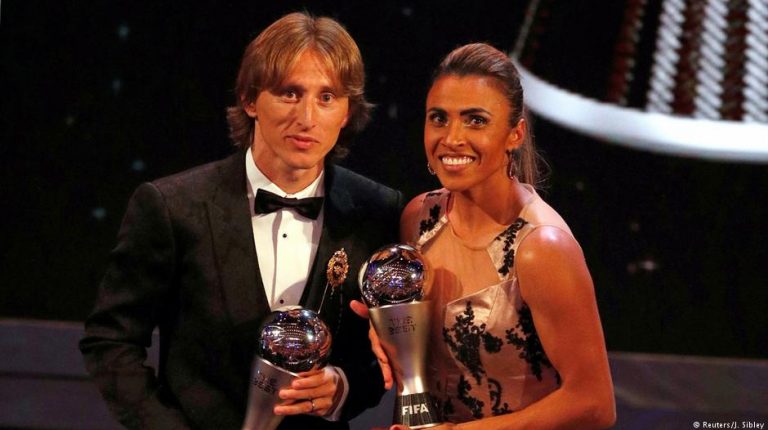 Croatia captain Luka Modric has been named as the best men’s footballer in the world at a FIFA award ceremony in London. The Real Madrid man pipped Mo Salah and Cristiano Ronaldo, while Marta again won the women’s prize.Modric enjoyed a stellar season, winning a third consecutive Champions League with Real before leading Croatia to the World Cup final, where they lost to France.

“It is a great honour and a beautiful feeling to stand here with this amazing trophy. First of all I would like to congratulate Mohamed and Cristiano,” said Modric on collecting the award. “I am sure in the future you will have another opportunity to fight for this trophy.

“This award is not just mine. It is my teammates from Real Madrid and Croatia. Without my coaches I would not have won this. Without my family I would not be the player I am today.”

It’s the first time since 2008 that neither Ronaldo or Lionel Messi has won the award and neither attended the ceremony. Surprisingly Salah, who starred for Liverpool last season, wasn’t selected for in the best men’s XI but picked up the Puskas Award for the season’s best goal for his solo effort against city rivals Everton.

Brazil’s Marta was crowned best women’s player for a record sixth time for her role in winning the Copa America to fend off Lyon duo Ada Hegerberg and Germany’s Dzsenifer Marozsan.

This is the third year that these awards have been known as ‘The Best’, having previously been a joint venture with France Football’s Ballon d’Or between 2010 and 2016, and before that the FIFA World Player of the Year award.

France boss Didier Deschamps was recognized as the best men’s coach after leading his country to a World Cup win, 20 years after he’d won the tournament as a player.

Deschamps beat off competition from Zlatko Dalic, who led Croatia to the World Cup final before losing 4-2 to France, and his former French team-mate Zinedine Zidane, who won a third consecutive Champions League title with Real Madrid before resigning in June.

“We are nothing without our players,” said Deschamps, after praising the other men shortlisted. “I would like to thank the whole team. They worked hard to get me here tonight.”

His compatriot Reynald Pedros picked up the women’s coach award after leading Lyon’s women’s team to a league and Champions League double.

“When I accepted the job, I wanted to first just enjoy everything in football and then to promote women’s football,” said Pedros, who took over at the start of last season.

“I am really enjoying what I am doing. What is important for us is that football is a game that people want to enjoy watching and we are trying to do that with our game.”

Among the others honored in London were Peru’s travelling supporters, who lit up their first World Cup in 36 years and German player Lennart Thy.

When playing for Werder Bremen in 2011, Thy donated DNA hoping to help a leukaemia patient in the future. This year, A DNA match was found and Thy missed a game for his Dutch side VVV-Venlo against PSV Eindhoven to donate stem cells to try and help a Leukaemia patient.