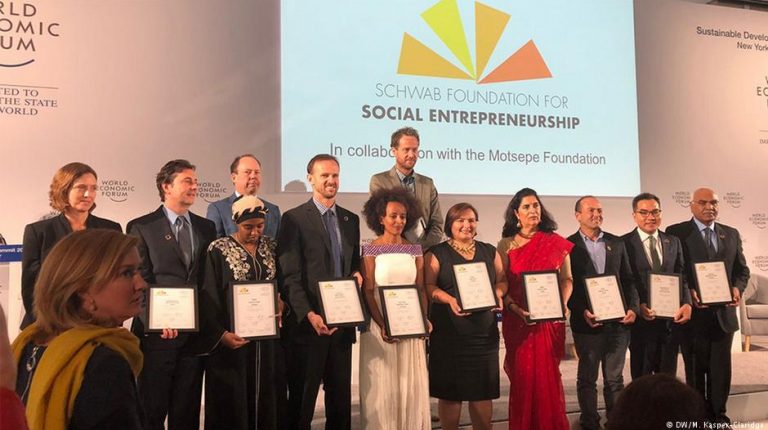 As the UN General Assembly gathers, New York is also hosting another meeting, organized by the WEF — the Sustainable Development Impact Summit. The gathering showcases how entrepreneurs can act sustainably.It’s a very special moment for Muhammad Amjad Saqib (pictured above on the far right) as he is called up to the stage in New York. The man from Pakistan is receiving an award from the Schwab Foundation. Making a big fuss isn’t his thing though.

Modestly, he stands on the stage along with other social entrepreneurs, who are also being honored for their extraordinary work. Saqib’s organization — Akhuwat — introduced zero-interest loans for the poor in Pakistan. That may sound crazy since most people want to earn money when they give loans. Even microloans usually involve high interest rates, 30 percent and more are common. Not so at Akhuwat.

“How can you do poverty alleviation when you charge such interest rates?” asked Saqib and draws a comparison to families. Brothers or sisters help each other, too, without charging interest, he said. That idea sparked his work in Pakistan. Donors give money to do good and then that money goes into a pool and is then given to those in need as zero-interest microloans.

The recipients use the money to found companies, for example, and create jobs in the process. Since Saqib founded the social enterprise 17 years ago, Akhuwat has distributed around $600 million (€510 million) this way. The name ‘Akhuwat’ comes from the Urdu language and means brotherliness.

But Saqib is not the only one receiving applause at the Lotte New York Palace hotel this evening; there are many others who have also promoted social change with their companies. In the audience are Christine Lagarde, head of the International Monetary Fund; Al Gore, former vice president of the United States; and Jack Ma, founder of Chinese internet giant Alibaba. “Never give up,” Lagarde told the winners. Ma added, “Do the things you believe in.”

The idea of social change

The fact that social entrepreneurship is getting more and more attention is also partly thanks to the Schwab Foundation.

“We wanted to give the people on the ground a voice but we did not want philanthropy,” said Hilde Schwab. Together with her husband Klaus, she is perhaps better known for a very different organization — the World Economic Forum, which organizes the famous summit in Davos every January.

But companies that actively support or push for social change, or have priorities that go beyond profit hardly get any attention there. The Schwabs wanted to change that and created a separate network. In the past years, they have honored 350 social entrepreneurs. Many of those honored also got the opportunity to meet powerful political and business leaders and promote their ideas.

The network is important

“I learn and I understand that I am not alone,” said Maysoun Odeh. The Palestinian has founded three radio programs for women. Her media company NISAA reports on topics that are rarely covered by traditional media like domestic violence or practical topics like the efficient marketing of products.

“Only 19 percent of Palestinian women work outside of the family,” Odeh said, but many produce everyday products at home like bags or certain food products. But they often don’t know how they can market these things. “We give them advice, which, by the way, isn’t only interesting for women,” laughed Odeh. She was honored as social entrepreneur of the year in 2015.

The Schwabs are visibly proud of what they have accomplished. “The social entrepreneurs of today will be the heroes of tomorrow,” Klaus Schwab announced euphorically who seems particularly at ease around them and happily poses for photos with the winners for a long time.

Then Al Gore took the stage. “I am really inspired,” he told the audience and the Schwabs weren’t the only ones who applaud enthusiastically.