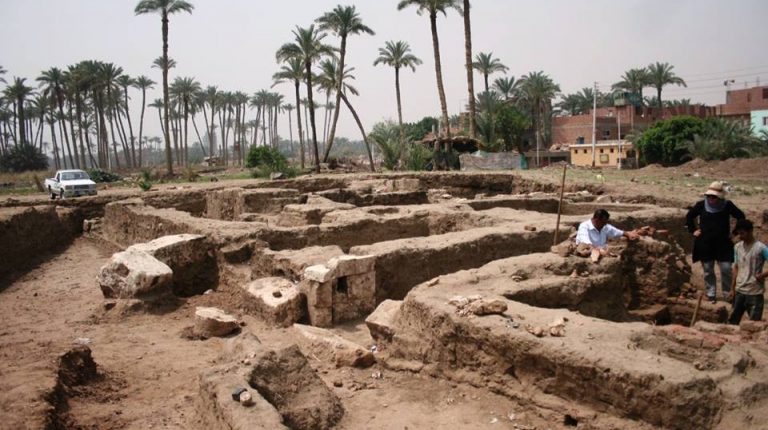 The Ministry of Antiquities announced on Tuesday finding a huge building, that is believed to be a part of an ancient residential area, located in Al-Demerdash area, near Mit Rahina Museum.

The building is located 400 meters south the museum. It was discovered by an Egyptian archaeological mission, according to a press release published by the ministry.

The 16×14.5 meters is made of mud bricks supported with large blocks of limestone, and its outer walls, inner staircases are built in red bricks.

Another smaller building was also found attached to the south-western main one, the mission found that the attached building includes a large Roman bath, next to a room that is believed to be a used in religious rituals.

“This highlights the idea of the existence of shrines in houses,” said Adel Okasha, director general of the Central Department of Cairo and Giza Antiquities.

He asserted that the mission’s belief that the room was used in religious rituals comes from finding a collection of purification basins and limestone holder for offering pots decorated with drawings depicting the head of the god Bes, inside of it.

Okasha added that the main building “has four entrances and several corridors.”

A third smaller room was also detected at the northern east side of the building, that was probably used for maids. That is due to finding remains of a baking oven similar in design in shape to modern ones used in Egypt’s rural villages.

The mission will keep the excavation work in the area ongoing, while they further study the building, in order to discover more details and further secrets.