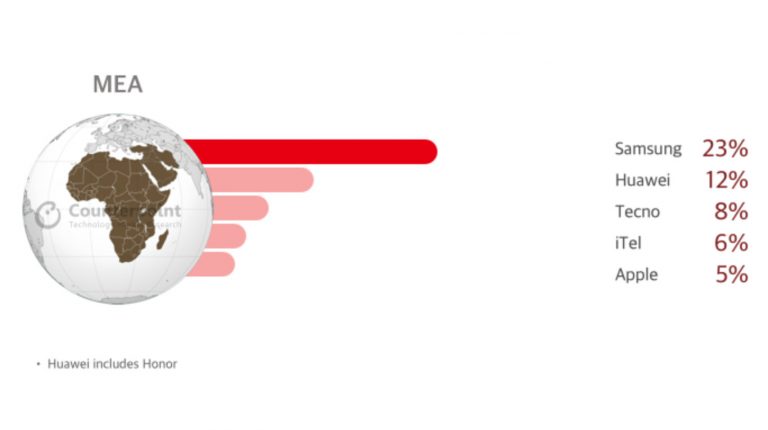 The market of smartphones in Egypt is seeing viscous competition with over 20 brands that are all Chinese except for Samsung, Apple, and Indian Lava.

Chinese smartphone companies control over a third of the sales of the Egyptian market, according to StatCounter’s index in August.

According to the report, Chinese brands account for 41.4% of the smartphone sales by the end of last August, while Samsung and Apple control 46.9% of the sales of the market, and the remaining percentage is distributed on the other brands.

Huawei was one of the largest-growing brands in the smartphone market with its market share amounting to 16.4% in August compared to 12.5% during the same period last year.

Infinix is the second Chinese company in terms of the market share, accounting for 7.2% by the end of August, compared to 4.5% during the comparison period of last year which brought it second after Huawei.

Even though Lenovo exited the Egyptian market, its sales are moving in a reasonable manner, as the company accounted for 6.6% of the sales of smartphones in Egypt by the end of August, which brought it third amongst Chinese companies in terms of market shares.

Oppo is a rather new company in the Egyptian market, however, it has managed to account for 4.4% of the smartphone sales in Egypt, becoming the fourth largest company with a market share among Chinese companies in Egypt after its market share was estimated to be 1.8% during the same period last year.

The remaining percentage of 4.4% was distributed on the remaining Chinese companies in Egypt.

The Counterpoint report has revealed that Chinese companies are taking over the sales of smartphones globally.

The report pointed out a decline of smartphone shipments in Egypt by 2% annually to 360m units in the second quarter (Q2) of 2018.

Samsung led the market of smartphones with a market share of 20% in Q2 2018 even though it recorded a 11% annual decline, due to the weak sales of its leading Galaxy S9 series.

The shipments of Huawei grew by 41% annually in the second quarter of 2018. The company has managed to become the fastest growing by 21% in the market of smartphones in China and has grown by 71% abroad.

The shipments of Apple, on the other hand, reached 41.3m devices during Q2 2018 with 1% increase, compared to the same quarter of last year. iphone X remains the bestseller of Apple in that quarter.

Huawei, Oppo, Xiaomi, and Vivo came amongst the largest sellers of smartphones globally.