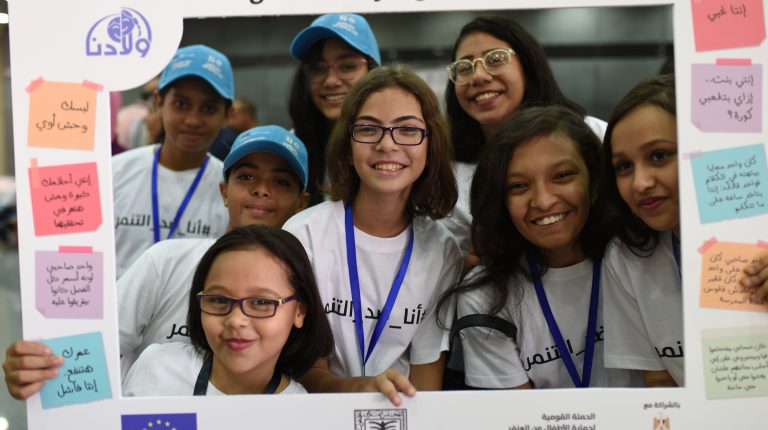 When Egypt’s first national campaign against bullying kicked off around a month ago, professionals working for the National Council for Childhood and Motherhood (NCCM), responsible for the national Child Helpline, knew they will be inundated with phone calls from children seeking help to stand against bullying. Nonetheless, it was far away from their imagination to receive a phone call from a young girl in tears, aged only 7, who is being bullied just because her father passed away.

“She cried while mentioning that she is left abandoned and no one wants to talk to her as she has become an orphan. All of her neighbours and friends refuse to talk to her, and would only make fun of her for not having a dad,” Azza Al-Ashmawy secretary general of the NCCM told Daily News Egypt at the campaign’s closing ceremony, which took place on Monday.

The social campaign calling to end peer-to-peer violence was launched in partnership with the Ministry of Education and Technical Education (MOETE) in cooperation with the United Nations Children’s Fund (UNICEF) and funded by the European Union (EU).

At Egypt’s National Museum for Civilisation, the campaign celebrated a remarkable, unexpected success within a few weeks from its launch, with the attendance of Ambassador Ivan Surkoš, head of the European Union Delegation to Egypt Bruno Maes, UNICEF’s representative in Egypt, Minister of Immigration and Expatriate Affairs Nabila Makram, and Mohammed Amr, deputy minister of the MOETE.

The #ImAgainstBullying campaign is a one of the EU’s supported projects called “Expanding Access to Education and Protection for At Risk Children in Egypt” which the EU funds with €30m.

“Today doesn’t mark the end of the campaign, yet, the start of a real change,” Surkoš said in his speech, adding “with the EU support to the nationally-led campaign addressing bullying, we are pleased to see it trigger a public dialogue refusing bullying as a type of violence faced by children.”

In her speech, Al-Ashmawy stated that the national Child Helpline 16000, which provides 24/7 support, received over 30,000 calls since the start of the campaign until 23 September with an average of 1,800-2000 calls per day, and over 20,000 messages through Facebook.

“We received several phone calls from children who are being bullied, and others who feel helpless while standing silently seeing other children being attacked,” she added.

Al-Ashmawy added to DNE that most of the calls came from 11-18-year-old children residing in Cairo.

“However, in this campaign, we don’t only target children, we seek the help of children, parents, and teachers to stand against bullying and all sorts of violence children face in schools,” she asserted. She added that children came up with several ideas, which they wanted the NCCM to deliver to the Ministry of Education including, “having a detention room for bullies to stay in for a whole week, in order to be stamped just as he stamps other children.”

For his side, Maes told DNE that the campaign has a long-term plan to fight violence against children including “strengthening child protection mechanisms and systems through child protection committees in different governorates.”

“The government is strengthening these committees, which lead and accelerate the identification of any case of abuse, neglect or violence against children, and more importantly to activate a referral mechanism to detect and report the abuse cases,” he said.

He asserted that bullying is a serious global issue, and that the campaign is not only launched in Egypt, yet in different countries throughout the region.

According to him, what triggered the importance of launching the #IamAgainstBullying campaign was a study conducted by the NCCM and the UNICEF in 2015 focusing on Cairo, Alexandria, and Assiut. The study disclosed that the highest level of violence facing children occurs at home, followed by school, with 29-47% of children aged between 13-17-years old reporting that physical violence among peers was commonplace.

The study came according to the latest global data published in 2011, indicating that slightly over 1 in 3 students aged between13-15 around the world experience bullying.

Makram shared her own experience of being bullied, both as a child, and as an adult.

“People think bullying only happens amongst children. In fact, it is an act that has no age. I was personally bullied for being tall, and even after becoming a minister, I still hear and read about me being labelled as ‘the tall minister,’” she elaborated.

However, she promised that the Ministry of Immigration and Egyptian Expatriate Affairs aims to play an active role in preventing children of expatriates from being bullied.

“They are mostly bullied due to their different appearance, accents, or their lacking capability of speaking Arabic fluently,” she explained, adding, “we try to help them fit into the society through various workshops.”

Maes concluded the event by sharing that the campaign witnessed the interaction of around 55 million people, each by participating with their own experience of being bullied, or—in some cases—by apologising to those they previously assaulted.

Uber boss Kalanick steps down for a while