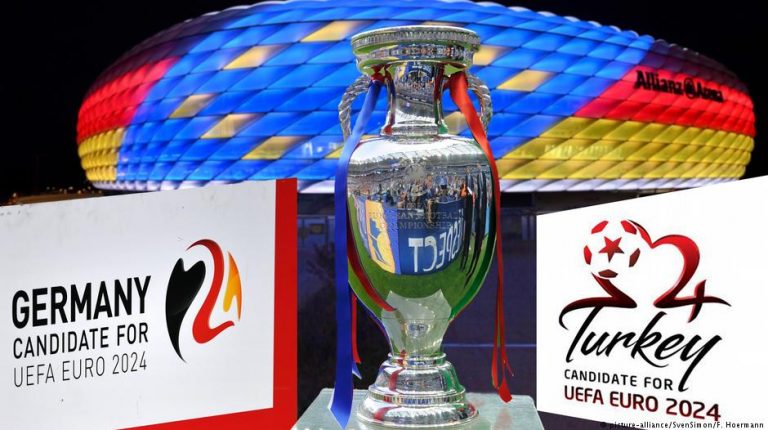 For the first time, a country’s human rights record will be considered as part of the bidding process for a European Championship. Though they have an advantage over Turkey, Germany are taking no risks for Euro 2024.On Thursday, UEFA are set to announce the country that will host Euro 2024, with Germany and Turkey the candidates. Freedom of expression is believed to be under threat in Turkey following the failed coup attempt in 2016, with some 228,000 people having been arrested during the country’s state of emergency, among them dozens of journalists. Russia, hosts of the 2018 World Cup, faced similar issues and a number of vocal critics in the build up to their tournament.

For the first time ever, UEFA has included clauses related to the human rights situation in the hosting country as part of its bidding process. In its announcement, UEFA said the bidding country has to “culturally embed human rights,” as well as “proactively address human rights risks.” The term “human rights” was mentioned 11 times in UEFA’s final evaluation report of both Germany and Turkey, which goes to show the importance of both countries’ record in the field. For comparison, the same report released ahead of Euro 2020 did not contain that term at all.

Read more: Could Turkey be the better host nation

Everything is ready to go for Euro 2024

Hugh Williamson, a Human Rights Watch (HRW) director, sees that as an “important” development. “It reflects the fact that football does not exist in a vacuum,” he told DW. According to Williamson, human rights issues are “a key aspect determining the nature of the event that takes place.” A tournament in Germany does not carry the same baggage as a tournament in Turkey, or in other countries he says.

Ahead of the World Cup, the DFB held two high-ranking meetings with numerous key human rights organizations, including Amnesty International and HRW, with a view to discussing the human rights situation in Russia. The first meeting was in May 2017, with a follow-up meeting taking place in March 2018.

The meetings were initiated by the DFB, which Williamson says is unusual. “The DFB seemed to have learned the public relations benefit of convening these meetings with human rights organizations,” he says.

However, some argue that human rights is perhaps a slightly lower priority for the DFB than what the organization tries to portray. Michalski told German outlet Tagesspiegel ahead of the World Cup that he’d have expected the world’s biggest football association to be “more demanding” about human rights issues in Russia.

“The DFB know what’s going wrong in Russia, but they hold themselves back with the fear of losing votes (in the Euro 2024 vote) and being punished for the political straightforwardness is big,” Michalski said.

According to Williamson, this is due to the German organization’s way of thinking. “They’re inherently cautious, and they’re unwilling to test the boundaries of their mandate,” the HRW director says, while adding that the DFB could have used its influence within FIFA to make them take a more “active, interventionist” stance on key human rights issues in Russia. The DFB is, according to WIlliamson, “one of the most powerful members of FIFA, if not the most powerful.”

DW contacted the DFB for comment on these issues but is yet to receive a reply.

“Human rights in crisis in Turkey”

Looking forward, both advocacy organizations say they will keep in contact with the DFB in order to raise awareness on various issues.

Williamson says his organization urge those making the Euro 2024 decision to keep human rights issues in mind when voting. And while he emphasizes that HRW “does not make recommendations,” Williamson adds that “human rights are in crisis in Turkey.”

These views were echoed by DFB President Grindel last year. “An important criteria would be the human rights situation, as well as press freedom and freedom of expression,” he told German outlet FAZ in September 2017. “All of these are a given in Germany.”

According to UEFA’s evaluation report, Germany have the clear advantage in these terms. The report says that the DFB’s bid “meets overall expectations” in regards to “political aspects, social responsibility and human rights,” whereas Turkey’s “lack of an action plan in the area of human rights” is mentioned as a concern. While the premium placed by UEFA on that part of the bidding process may not yet be clear, by Thursday the host of Euro 2024 will.