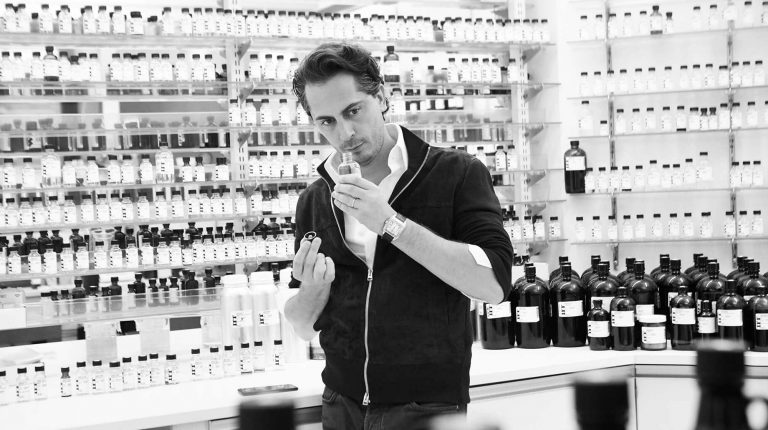 In his 20s, young Kilian Hennessy knew that whatever job he would get at his family’s Cognac’s empire, people would say he got it because of his last name. “And that is not what I wanted for (the) future,” the international perfumer told Daily News Egypt.

Parisian perfumer and cognac heir Kilian Hennessy knew that he did not want to work for his family. “It is very hard for a tree to grow next to a big tree,” he said adding that “when I look at my father he never really found his place, because his father was so powerful. My grandfather created global LVMH.”

Hennessy wanted to be able to find his own path and look in the mirror and see a reflection of someone who built himself on his own.

In his fifth year while studying language and communication at the Sorbonne in Paris, he started his story of success when he was doing his thesis on the semantics of scents, he enrolled in a perfume school, only to start smelling raw materials and natural oils.

“I was hooked immediately. I felt this was going to be my world,” he Daily News Egypt, remembering since the first night he stayed up mixing and creating.

Since then, 24 years ago, Hennessy has reached a peak in the international perfume business, working with several of the heavyweights in the field.

For every journey, he picked up an experience that is helping him till this day in running his business.

When he was working at Paco Rabanne, he was faced with the challenge of a short budget, hence in order to compete with big players, like Chanel and Christian Dior, he and his team needed to be super creative, and at the time he made Ultraviolet. “We had to create something very surprising.”

Afterwards, he joined forces with the Gucci group to be their international marketing director for Alexander McQueen. With McQueen, he learnt how to build a collection, something that will really influence his work.

In L’Oréal, he worked for Giorgio Armani, where he learnt to be a profitable company, and L’Oréal was the place to be.

However, despite doing business with the top firms of the perfume business, nothing benefited Hennessy more than the learning he acquired from being an entrepreneur, as in his words, “you make mistakes everyday, and you repay and learn from these mistakes.”

Hennessy has also learnt to not to stop learning even from the most simple daily situations. For example, accompanying his perfumes with a clutch is a signature that he perfected and became famous for.

His first collection did not come with a clutch. But he got the idea when he his wife forgot her clutch, but she then took the case of one of his perfumes from the very first collections and used it to put her personal stuff. In his second collection called “In the Garden of Good and Evil”, a metaphor of the garden of Adam and Eve was used to create a case that would turn into a clutch.

Having engraved a name in the European and American perfume scenes, in the last years Kilian has been expanding throughout the world to spread his poetic works.

Since the acquisition by Estée Lauder companies, Hennessy’s group decided to move with one partner for the whole region. In the Middle East they chose the Chalhoub family. “The strategy for the Middle East was to operate in free standing in boutiques, because this is the way you can express the brand better.”

Hennessy’s first boutique in the region is in Qatar, and the coming one will be in Kuwait. For customers in UAE, the Middle East’s top Fashion and style destinations,

For Jeddah, or ‘the Los Angeles Middle East’ as Hennessy called it, he launched a boutique in Red Sea Mall. “Each time I meet a friend who used to live in Jeddah they say that it is fantastic.”

Hennessy has a lot to offer Arab customers. According to him, three aspects make his products different from his customers.

The first is that his perfumes are part of a collection. “They are like a book, every perfume is a chapter of a book. It is much more poetic, and this is due to my background in literature.”

Secondly, us Hennessy’s keenness on real luxury, something he is proud of. “All the names are engraved on the perfumes’ bottle, not by stickers, in addition that the bottles are refillable, as in you keep them all your life, like in the old days.”

Third, is the quality of the ingredients he uses. The way he builds the perfume is different from how his competitors do. “I go back to the way we used to build formulas in the 1940s and the 1950s, when a big part of the formula was the dry down. Because the dry down is what stays on your skin and clothes. And this became a speciality that makes our brand different and gives them characters.”

During his first years with his brands, Hennessy wanted to name each perfume with a city, but as his exposure increased reaching different cities, he had to improvise. “For the Middle East we introduced Pearl Oud, which is the top selling among the Middle Eastern customer.”

Looking back at his career, during his tour in the Middle East. For him, it feels like an important moment, but at the same time he is looking ahead on how his brand is going to achieve in the next 10 years.

“I have so many ideas. We are venturing into new categories,” he said adding that he will be launching scented lingerie, as well as jewellery brands with the help of designer Elie Top.

World Cup 2018: Germany ‘have to pick things up’ in first game