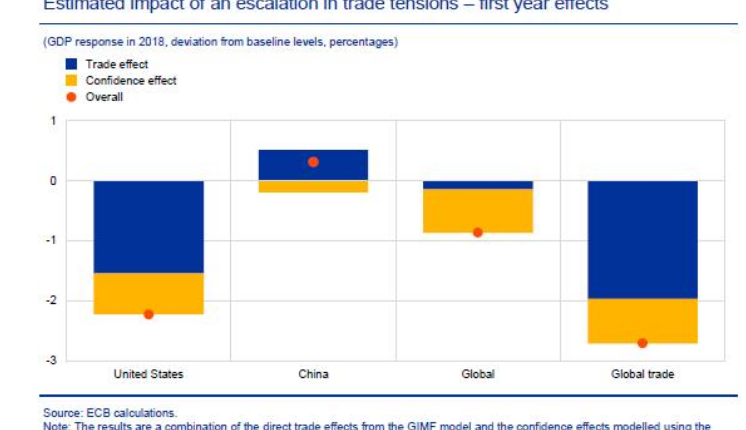 A fierce global trade war would hurt the United States’ economy significantly, making households poorer and destroying jobs, while China would not suffer as much, and it may benefit, according to a simulation carried out by economists at the European Central Bank (ECB).

Going back to the beginning of that fierce trade war in March, US President Donald Trump said trade wars were “good, and easy to win,” as he started a dispute with China, that has seen its administration impose tariffs on steel, aluminium and various Chinese products.

In a research published on Wednesday, the ECB assumed a 10% US tariff on all imports and an equivalent retaliation from other countries.

Hence, the ECB suggests that the US would bear the brunt of diminished trade and of damage to consumer and investor confidence, as stock and bond markets could be hurt by a general loss of confidence in the economy.

Under that Scenario, China would more than compensate for the loss by selling its products to other markets.

In that Scenario, the US firms also would invest less, and hire fewer workers, which amplifies the negative effect.

The ECB expects that the US growth would be cut by more than 2 percentage points.

Notably, the International Monetary Fund (IMF) currently expects the US economy to expand by 2.9% and 2.7% by the next year.

On the other hand, the ECB explained further that China would benefit as it would export more to third countries where US goods are subject to tariffs.

Bearing in mind, the ECB stated that this slight benefit would be temporary and partly offset by a negative effect on confidence.

In terms of the global trade level, the ECB assumed that it could fall by up to 3% relative to the baseline.

Notably, the tensions between the US and China have intensified over the recent days, leading to a new round of tariffs on each other’s goods.

Namely, $200bn of Chinese products will subjected to tariffs starting 12:00 am according to Washington time on Monday, on addition to the $50bn in goods already slapped with tariffs actions.

According to Bloomberg, the combined $250bn in products facing levies is almost half the value of US imports from China last year.

Meanwhile, $110bn of goods imported from the US, representing about 70% of the value of goods that china bought from America in 2017, will become subject to Chinese tariffs around the same time and the trade war is still ongoing.

According to the US government data, the value of bilateral trade estimated at $505bn last year, making it the world’s largest trade relationship, hence this trade war affects all the world, not only the two parties.