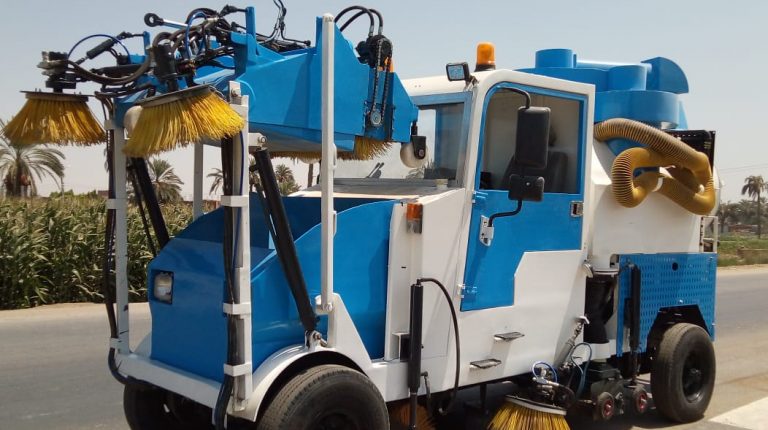 The design of the first 100% locally made cleaning truck in August, following years of trials and errors, is finalised. The car costs about 75% less than imported models, coming with two engines each of 150 HP.

Kamal Emad, the inventor of the car, said that the main idea for designing the car was to be used in agriculture production, but due to facing difficulties in building them, he opted to use them for cleaning purposes instead.

He added that the car is 25% of the cost of importing trucks of EGP 4m.

Emad explained that the car consists of local components starting from the cabin, the chassis, and both the hydraulic and electricity circuits. He added that the reason for the delay in announcing the manufacture of the car was to confirm first the availability of spare parts for the car, as well as the provision of expenses.

Moreover, he pointed out that the car operates 70% on hydraulic and most of the spare parts come from heavy transport equipment and cranes.

The car works in the first two parts: the front part for sweeping using two side brushes and a middle brush, he added. It has a front tank for 1.5 tonnes of dust. The rear part can be used for sweeping and vacuuming with the same capacity.

Meanwhile, the two front brushes collect dust and garbage and collect them in the middle of the car, then the middle brush compresses that inside the sweeping device in the front to store dust, he elaborated.

The back of the car also includes two side brushes and a middle brush to collect dust and garbage. This part is controlled by hydraulic to collect dust on the side to be sucked through the vacuum, which can also be used for solids from the streets such as gravel.

Furthermore, the car was equipped with a water pump to draw water and distribute it on the front and rear brushes to ensure that the climate does not disturb the citizens, Emad said, adding that the car is equipped with three cameras to enable drivers to control the brushes.

The car was tested in the province of Minya for a distance of 3 km for sweeping and suction and proved to be efficient, he said, elaborating that the car can reach a speed of 50 kmh.

The selection of each part in the car has been carefully considered to ensure continuity of work for, as long as possible and provided with front and rear tanks to store waste until they are assembled.

He explained that driving the car is simple and uncomplicated and it is possible in the case of producing many models, which can save the state the hard currency used for imports.

Emad pointed out that he did not submit his project to any governmental agencies so far and in the case of a private company offers to take the project; there is a one year warranty for that car.

50 years on: the oily legacy of the Torrey Canyon